In the long run, we are all dead, I know. But, for heaven's sake, he was just 27. Murdered. Brutally. In cold blood. For something so abstract, so derided, so demeaned as "Values"... 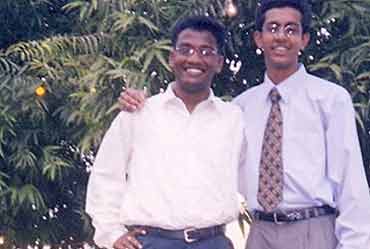 Peals of laughter, grunts, guffaws all around. Everybody agrees - and finds it amusing how anybody can be bathed in milk, except idols of stone, of course.

That is what stays with me from a PSU project. A 'motherhood statement', if you will.

My first thought, when I was asked to head to the Netherlands was one of relief: "Wow! No PSU client office!" Finally, I wouldn't really need the early morning Pranayama, and all those deep breathing exercises, to help calm down at the daily frustration with inordinate delays (or each time I went to the loo). Finally, there'd be offices without rats and elevators without bats. What more could I wish for?

And when I stood a half meter below sea level, I never gave even a passing thought to that batchmate of mine, Manjunath. Never thought of him really - Manju, the one who stands smiling, arm in arm with me, in the graduation day snap above I was busy instead, sipping my cappuccino, regaled by colleagues about such peculiar Dutch phrases as "Well, I’ll have to trust you on your blue eyes".

Till I received an email. About this old friend, Manju, who didn’t have blue eyes for sure, but could be trusted far more, I'd say, than anybody with them. He had been shot. Dead. That was all. No more details. As my eyes turned moist, I thought, oh my God, must have been those Naxalites - images of a Red Corridor spreading its wings in UP. Or caught in a crossfire, perhaps? Collateral Damage Or something. I felt not just sad; I was shaken.

Memories came rushing. But not yet revulsion. That was to follow later.

Manju would joke about us - those of us who couldn't even 'brave' those rats and bats. While the rest of us went in search of MNC salaries and perks, he had opted for a Public Sector job. Yes, PSU: Public Sector Undertaking. (A Pathetic, Silly Utopia, we would snigger) As a sales officer in Indian Oil Corporation. An IIM 'product' visiting petrol bunks, collecting samples, giving them homilies like "Maalik nahi, customer paisa deta hai". He thought he could convince 'them' not to cheat, not to adulterate kerosene into diesel. He thought making surprise visits would add probabilistic fears and deter malpractices. Silly fellow, my friend Manjunath. Always an idealist, but what a senseless tragic end, I sighed.

But the details, as they emerged, turned the sighs into a rage - an impotent rage. He was not 'collateral damage'. He was killed. Murdered. In cold blood. Shot six times. Dumped into the dicky of a car. To be dropped off at a paddy field. For vultures to peck on. For having sealed a petrol bunk. A petrol bunk that mixed kerosene in diesel. For having turned down bribes. For shrugging off veiled threats. For having persisted with his ... values.

Sounds clichéd? Almost like one of those idealistic films of the 60s? Yes, yes, I know. But: Values…Values…It all came back. Loud and clear.

I first met Manju at IIM-Lucknow, after he had done his Research Associateship at IIM-Bangalore. His topic of research, and the topic that had caught his imagination, was, well, ‘Values’. And he was ever so willing to hold forth on the subject. He was so full of them, we'd joke, that he would choke. But those deep, sincere, guile-less, earnest eyes - as I said, they were not blue - would get to us. We couldn't treat it as a joke. He was serious. And made us all who would listen equally interested and involved. Tough luck if there were a Quant exam the next day, because all Manju wanted to ever discuss was Values.

He’d probably have liked it if there were an HR exam everyday -- he’d have loved to write about 'values'. And making a difference. To - yes, hold your breath - society. No wonder, his favourite course in the MBA program was ‘Leadership’. And no, there was nothing put-on about him. He spoke from the heart and hated any pretence in presenting himself – class discussions, interviews, anywhere. He would talk about meditation and mind control - to our bemusement - primarily as means to overcome the impulses that make one deviate from, yes, 'values'.

And he could sing. Brilliantly. Which made him the most popular guy in the batch. Whenever I sang a duet with him, he would give me the easier part to sing. And he had his own 'fundas' on doing well: "I will tell you something personal - just keep one thing out of this – ego – and our show will come out perfect!" It always did.

We talked so much, late into the nights, but never did we come even close to discussing what we'd be willing to give up our lives for. Somehow, I know, though, that he would have jumped up and said, "Values". Well, that is what he did.

In the long run, we are all dead, I know.

Murdered. Brutally. In cold blood. For something so abstract, so derided, so demeaned as "Values"?

Tears swell up, but they are also tears of pride - for his glorious union with his highest ideal.

Rajeev Gandhi had put the figure at 15, but out of every 100 rupees that flow out of Delhi, the Economist says, only 27 reach where intended. The rest is waylaid: as feed for greed. How I wish that the waylaid 73 would flow into a river instead - to feed the fish rather than the human piranhas.

I’m a poor man in a backward district of Bihar. I am weighed down by this huge rock (They call it by various names: Corruption. Criminals. Political Nexus. Goondaism....). I’m trying to dislodge it somehow. Get it off my head. Every time I grow in strength by 27x, the stone grows in weight by 73x. How can I throw it off then? Will the multiplying strength of the 73 not just crush the 27?

I don't know how many such 27s have been crushed, but for now they only found the body of my friend.

But that's the way of the world, they tell me. It is routine. Simple arithmetic. How can 27x not be crushed by 73x? Forget the nameless and faceless ones, the ones who didn't go to IITs and IIMs. Don't I remember Satyendra Dubey? Manju and Satyendra Dubey were impractical idealists, they say, magisterially. (Pretty Silly Utopians? I think of Manju and know he would give me a wry smile) Suited for Hindi films of the 60s (not now - now the idealists soon get disillusioned, join the underworld gangs and become bhai log or bhai ke aadmi). So passé. Fit not even to be in today's cinema. So the ‘practical’ people tell me. Impotency, one must admit, can actually be a natural choice. I would still not like to believe, but it seems so true, so ‘practically’ true.

Something happened with the death - no, murder - of Manju. Manju who epitomised life itself. What would he think of some of those angry calls by the IIM and IIT students not to join the PSUs anymore? To see the values that mattered so much to him be decried and derisively dismissed? These angry calls to opt out, I am sure he would point out, are all adding weight to that rock, that stone on our collective head, for they strengthen the 73s and not the 27s.

I may never have been so clear about those values so dear to Manju before, but now with him gone, I suddenly am. Else, I know I would not be standing by him now, as I stood in the photo. I would be adding weight to that stone...

Hell, I would become stone myself. 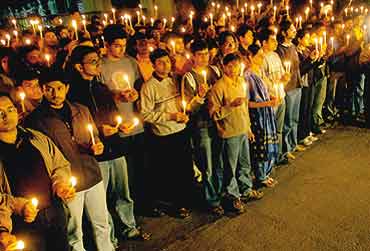 But let me share something else with those who bother to read this far. The '27's are actually in a majority. Something that is manifest in the outpouring of grief and, more importantly, rage at Manju's murder. It is just that the rock stands out. Because all of us imagine it to be over our individual heads, as we try to dislodge it all by individually, or just get overawed by it. They can kill one Manju, one Satyendra Dubey, but can they kill all of us? And yet they manage to kill us individually. One by one. Because we don’t come together. Surely all of us together can hurl that rock far away?

Too simplistic, you say in your cynicism? After all, this rage too would subside? This ek minute ka gussa would be spent after signing an internet petition, or ranting on a website? Call it Manju's infectious optimism that is guiding me, but I somehow know what I - and we - need to do. We all know it. We just need to practice it. And it is not very difficult, I can almost hear Manju's excited exhortations. It only means such simple things as: Taking a receipt of 100 Euros for the taxi ride that cost 100 Euros. Not looking left or right while writing an exam. Not giving a PSU purchasing officer an expensive watch while submitting a tender in his office, and just telling him the time from your watch when he hints that he could do with one more...And doing what one is supposed to.

Impotence that takes many guises – ‘practical’, ‘pragmatic’, ‘wordly wise’, and such like. While principles are dismissed as ‘impractical’, ‘art movie type’, ‘utopian’. By people like us. By people like me... But that is something I am going to change about myself. But I think I won't have to, for Manju, in his brutal death, has already changed that in me.

You practiced what you preached, Manju. Just like that physics professor whose books I studied to get through the IIT exam. That Prof. Walker, who was a daredevil of the ‘faith of science’, if ever there was one. Remember, the one who used to try out all the theories of physics in practice? The one who walked on hot coals, dipped wet hot fingers in molten lead, poured liquid nitrogen in his mouth? He loved his physics, and believed that the ‘Leidenfrost Effect’ would protect him.

Richard Feynman – the physicist who surely joked most of the time - stuck his hand in water first and then into the benzine and lit it, to prove a point in the physics he loved and believed in. The first time, when he was a boy, it worked fine. The second time around, he was in college, and it hurt like hell – by then he had grown hair on his hand, which got singed.

When I had studied that book on physics - which I loved more in those days than I loved cricket - I was struck by Prof. Walker’s idea of earning a physics degree. A physics degree granting programs should employ "fire walking" as a last exam, he’d said: If the candidate’s belief in physics is strong enough that the feet are left undamaged, the chairperson hands the candidate a graduation certificate. Perhaps why I didn't study physics and joined the IIT to become an engineer.

By that yardstick, Manju, you were the truest of true leaders, because you really walked on hot coals. Prof Walker had done it clasping his Physics textbook close to his heart. You had clasped your values – and not our textbook on leadership, because those can never be put in a textbook really - in mafia land, in UP. In front of that criminal dealer who was cheating the poor, selling them kerosene for diesel.

Akhil Krishna is an Enterprise Resource Planning (ERP) implementation consultant with SAP India, Bangalore, currently on a project in the Netherlands. He has a B.Tech from IIT Madras and a PGDM from IIM, Lucknow

'Sermons For The Poor'