A minority government and uncertainties regarding the peace process and the economy are a combination that creates a troubling picture of Sri Lanka's future. 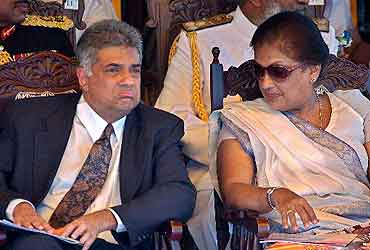 The message in the verdict was loud and clear. Though the people have voted out the Ranil Wickremesinghe administration, they have not voted in a party with a clear majority. A hung parliament scenario confronts Sri Lanka as its people prepare for the Sinhala and Tamil New Year in the coming week, while the country faces multiple uncertainties regarding the nature of the new government and how it would address the ethnic issue and the economic challenge. At the time of writing, the United People's Freedom Alliance (UPFA) - a coalition between President Kumaratunga's Sri Lanka Freedom Party (SLFP) and the ultra-national socialist Janatha Vimukthi Peramuna (JVP) - which emerged as the party with the largest number of seats, was all set to form a minority government.

But the uncertainty with regard to the course of the peace process and the economy still remains.

In two years, the Wickremesinghe administration succeeded in stopping a 20-year separatist war and salvaging the economy, with the GDP recovering from a negative rate to a healthy 6 percent - achievements that were rewarded by the international community with a promise of US $ 4.5 billion in aid over the following three years.

With the election results returning a coalition that has radically different views on the economy and the peace process, the gains made over the past two years may be frozen or squandered, as the international community is unlikely to commit itself before it is confident of the direction and intentions of the new government.

The results also demonstrate clearly that Sri Lanka has become a polarized nation. The South has responded in kind to the North's effort to rally behind the Liberation Tigers of Tamil Eelam (LTTE), which backed the Ilankai Tamil Arasu Katchi (ITAK) - better known as the Tamil National Alliance (TNA).

Election results show that more than 90 percent of the Tamils in the North and East have voted for the ITAK, while 55 percent of the people in the South have not voted in favour of Prime Minister Ranil Wickremesinghe's United National Front (UNF) in spite of the administration's relative success in keeping the guns silent for more than two years.

In fact, one of the main reasons for the defeat of the UNF was the erosion of its vote bank in favour of the all-monks party, the Jathika Hela Urumaya (JHU), which has won nine seats, creating a landmark in the parliamentary history of Sri Lanka.

The UNF's defeat is an indication that the masses had accepted the opposition charges that the Wickremesinghe administration was corrupt and had made too many concessions to the LTTE. The economic dividends of peace, which the Prime Minister spoke highly of during the election campaign, it appears, have not traveled beyond Colombo to win over the support of the rural masses, for whom the most pressing issues are fertilizer subsidies and poverty-reduction doles. They have also, significantly, rejected the notion of peace at any cost and helped the anti-devolution JVP to gain a maximum number of seats. In fact, the JVP accounts for 40 of the 105 seats that the UPFA has won.

Ironically, the results of the April 2, 2004, general elections have only strengthened the hands of the LTTE, which had been somewhat weakened by the rebellion of its eastern commander, Vinayagamoorthy Muralitharan alias Karuna. While it will be a matter of time before the LTTE can overcome the Karuna crisis, the elections results have handed the LTTE-backed TNA, which won 22 seats, the power to make or break the government.

Though the UPFA has emerged as the party with the largest number of seats, it still falls short of the magical 113 required to form the government. With the JHU refusing to align with either of the main parties, the UPFA can only form a minority government - meaning that Sri Lanka has once again slumped into political instability, putting the peace process and the economy into jeopardy.

In an effort to form a stable government, the UPFA is reported to have made overtures to the Karuna faction, which has issued a directive to the five TNA members elected from Batticaloa and Amparai districts - where the Karuna faction's writ reigns. But it is unlikely that the five members would back the UPFA even if Karuna orders them to do so, because they would not dare to provoke the wrath of the LTTE's Wanni leadership. Besides, such a flirtation with the Karuna faction will certainly antagonize the LTTE's Wanni leadership, which holds the key to both war and peace. It needs also to be noted here, that the LTTE had obtained undated resignation letters from all TNA candidates even before they were elected as MPs.

The only option available for the UPFA is to woo the Ceylon Workers' Congress (CWC), which contested the elections on the UNF ticket and is projected to have won as many as six seats. Even if the CWC, which represents the plantation people of Indian origin, joins the UPFA in a coalition, President Kumaratunga's new alliance will still be two short of a simple majority.

At the time of writing, moves were under way to woo small parties. Even if the UPFA manages to garner 113 seats with the help of small parties, it is not clear how it would resume the peace process.

The LTTE has said that, whichever party comes to power, it wants the peace process resumed by the end of April with its proposals for an Interim Self-Governing Authority (ISGA) forming the basis for negotiations. It has also said it will not renegotiate the ceasefire agreement.

In the light of the LTTE stance, can the President who is now a political hostage in the hands of the JVP, go ahead with the peace proposals she put forward in 2000? The Kumaratunga proposals contained an extensive devolution package, which the JVP had then rejected. The JVP still opposes devolution of power as a solution to the ethnic problem, but sees decentralization of the administration as a means of solving the national question.

The JVP has also rejected outright the LTTE's ISGA proposals, while the SLFP has given tacit acceptance to these as a basis for negotiations.

The JVP position is obviously unacceptable to the LTTE. The sharp difference in the policies of the two main coalition partners in the UPFA is likely to hamper the peace process and heighten the chances of a breakdown, and war. Both the SLFP and the JVP say they are for peace and will resume talks with the LTTE. But the difference is that, while the SLFP is ready for unconditional talks, the JVP wants to resume talks on what it calls 'reasonable' conditions.

The coalition partners do, however, agree that the LTTE is not the 'sole representative' of the Tamils, and such a position would certainly not be acceptable to the LTTE.

With the coalition partners divided on the approach to peace and not willing to recognize the LTTE as the sole representative of Tamils, the country could possibly be dragged back into war. The only factors that can hold the LTTE from tearing up the ceasefire and going back to war are: first, the Karuna rebellion; second, the post-September 11 global war on terrorism; and third, connected to the second, is the LTTE's effort to gain international recognition as 'freedom fighters'.

Added to this uncertainty are the questions regarding the direction of the economy. The JVP is pushing for a mixed economy with import restrictions and an anti-privatization drive, as opposed to the SLFP's free-market policies. Besides, the UPFA manifesto has promised welfare measures, which the country can ill afford, given the current weakness of the economy. Economists say that the resultant uncertainty will erode investor confidence, which in turn will result in a foreign exchange crisis, prompting the new administration to resort to austerity measures.

A minority government and uncertainties regarding the peace process and the economy are a combination that creates a troubling picture of Sri Lanka's future.