I gave up on trying to do the Bombay scene - what was the point when it was so Delhi?

Except for the fact that I often find myself at the receiving end of it, I wouldn’t waste my time with the whole Bombay-versus-Delhi argument.

Nude Elly has the publishers, a Gulab Jamun says sweetly. Yes, but Bumbay has all the poets, a Vada-Pau retorts. William Dalrymple suggested that Delhi might be the City of Djinns (not to mention tonics); Bombay was the Maximum City, Suketu Mehta returned. Bombay, courtesy Vikram Chandra, got Love and Longing; Delhi, courtesy Nayantara Sahgal’s acute eye for its drawing room politics, merely had a Situation in it. 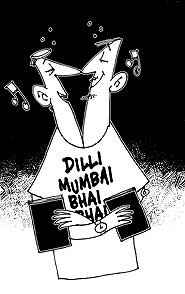 Any suggestion that Delhi might have a sprinkling of talented writers is promptly scotched by references to the Great Bombay Novel, written by everyone from Salman Rushdie to Vikram Chandra, Mistrys Rohinton and Cyrus, Kiran Nagarkar, even Ashok Banker and Jaideep Verma. Delhi, despite one-off attempts (Khushwant Singh, Sahgal, Krishna Sobti), still has some catching up to do. The Bombay novel has been thoroughly explored; the Delhi navel only cursorily gazed at.

So, in Bombay for the Hutch Cross-word awards, I would genuflect before Bombay’s writers, listen respectfully to Bombay conversations, relearn Bombay’s streets courtesy Saleem Sinai and Gustad Noble and Ravan and Eddie.

At first it went according to plan. I revisited bookshops that a Bombay writer, Jerry Pinto, had spent an entire day taking me round many years ago. Kiran Nagarkar and Naresh Fernandes demonstrated, at a concert of Algerian music, that tough guys do dance. Then Suketu Mehta took a bunch of us to the Janata Bar. He had just won the first Crossword non-fiction prize for Maximum City and wanted to celebrate at the small permit room in Bandra with its warren of rooms that was emblematic of all the bars and bar girls who had starred in a key section of the book.

As Suketu and his entourage left the awards dinner, there was a slight sense of déja vu. The writers we were saying our farewells to included Krishna Sobti, Ira Pande, Mishi Saran—Delhi imports; the gorgeous young thing whom the boys were trying to persuade to join us was a Delhi import, and half the author population at the Bar were Delhi imports. I gave up on trying to do the Bombay scene—what was the point when it was so Delhi?

But there is one way to get Bombay and Delhi to bury their differences. On a similar evening at a bar in Delhi, we came up with the perfect marketing plan for Indian Writers Inc. There, before us, was the surrealist of the keyboard, musical and computer, the Stones-meets-Bangla-rock vocalist, the gravel-and-cigarette voiced streetfighting man whose prose was as syncopated as his sense of rhythm, the moody poet of the bass guitar. Add Uncle Salman, who must have picked up something from his friends U2, and Nagarkar, with maybe Suketu on the maracas, and we’ve got a Bombay-Delhi combo that would rock any joint in town. Call them the Backspace Boys, organise a bunch of groupies (would the Booker Hookers be too extreme?) and step back from the mike.