Thousands of migrant workers are leaving cities after the central government announced a three-week nationwide lockdown to prevent the spread of Coronavirus. 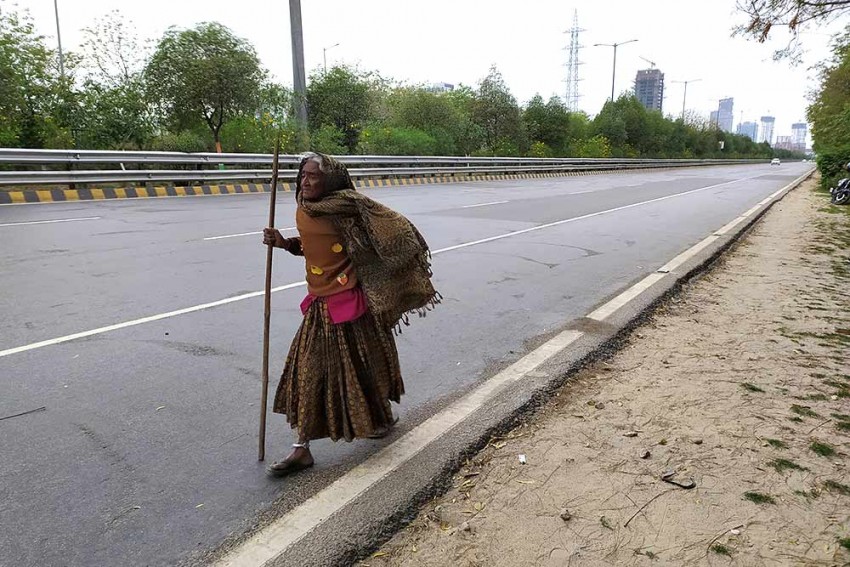 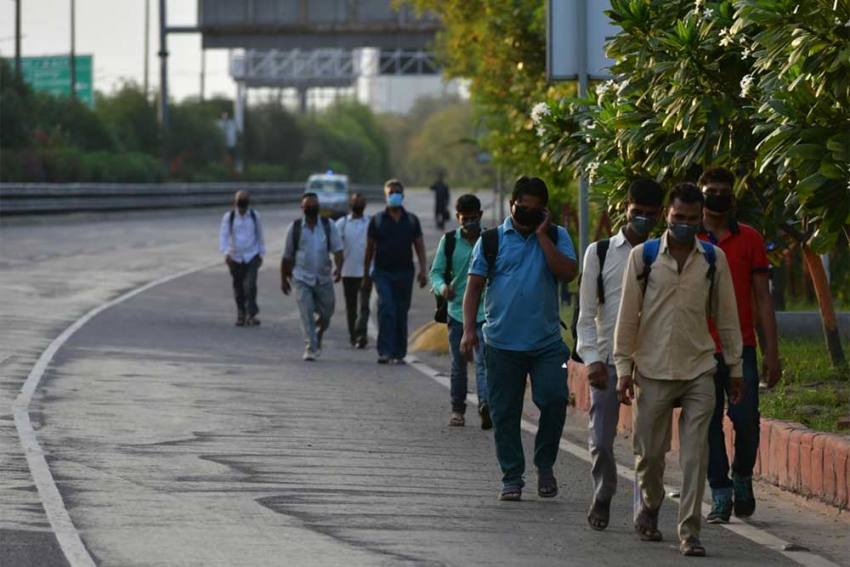 A group of daily wage labourers on Noida-Greater Noida expressway walk back to their homes after the Centre announced a 21-day lockdown to combat the spread of coronavirus.
Photo by Tribhuvan Tiwari/Outlook 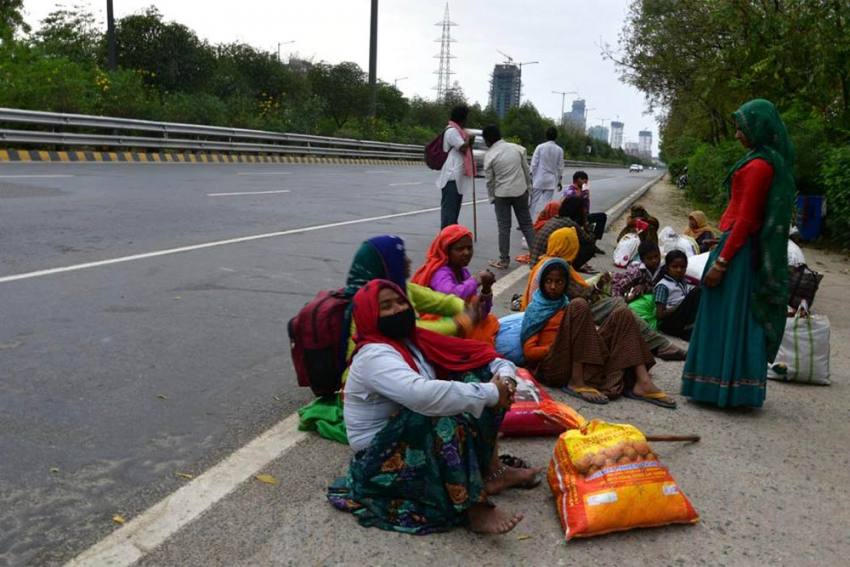 Thousands of migrant workers and daily wage earners, who have been rendered jobless after the lockdown, are leaving the national capital.
Photo by Tribhuvan Tiwari/Outlook 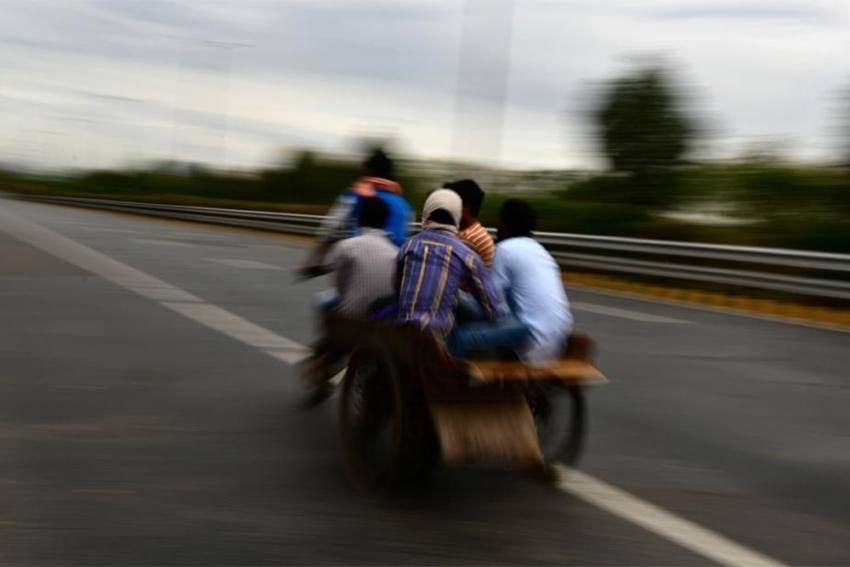 Stranded after the lockdown, these workers are walking back to their villages and towns from their places of work hundreds of kilometers away.
Photo by Tribhuvan Tiwari/Outlook 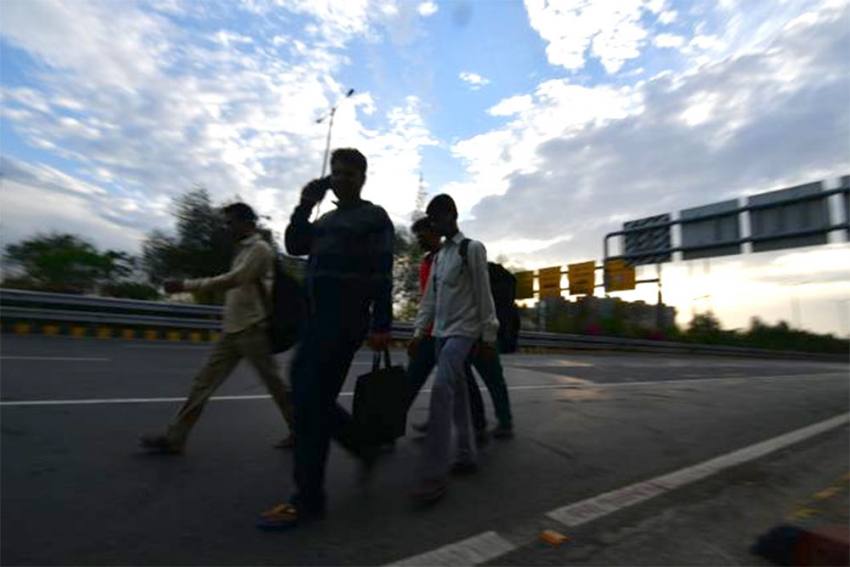 With no sight of work and bread in the coming days and with no interstate buses or trains available, they are heading back home on foot.
Photo by Tribhuvan Tiwari/Outlook 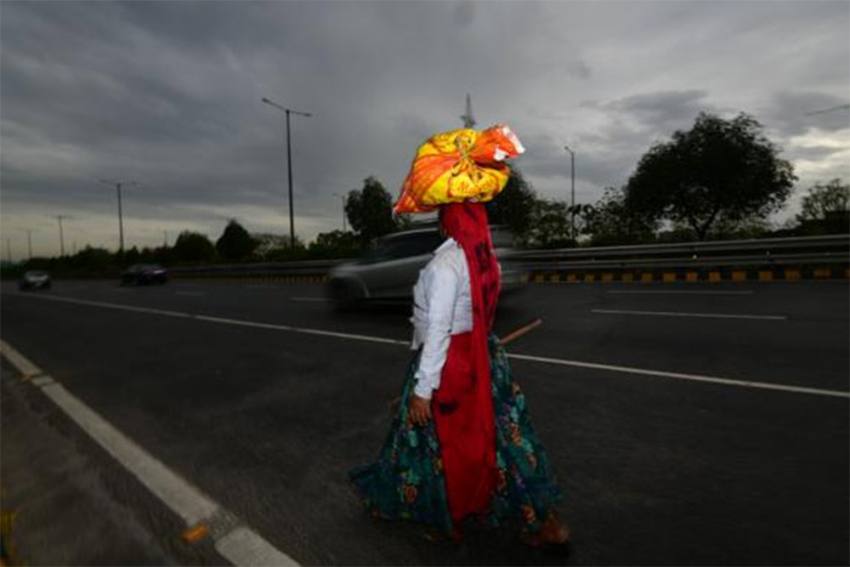 Women and migrant workers have been worst hit by the lockdown.
Photo by Tribhuvan Tiwari/Outlook 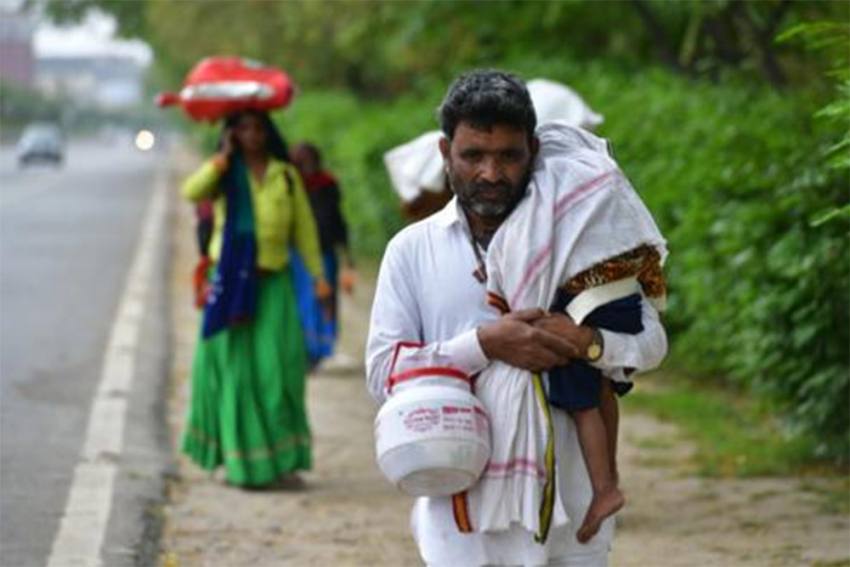 The Noida-Greater Noida expressway is marked with people walking afoot, carrying their little ones on their shoulders.
Photo by Tribhuvan Tiwari/Outlook 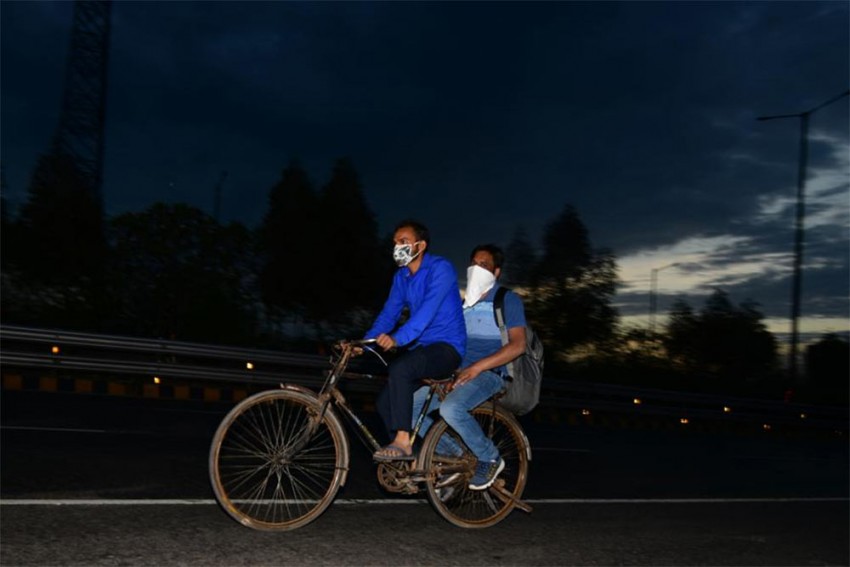 Daily wage workers walk along an expressway hoping to reach their homes, hundreds of miles away, as the city comes under lockdown.
Photo by Tribhuvan Tiwari/Outlook 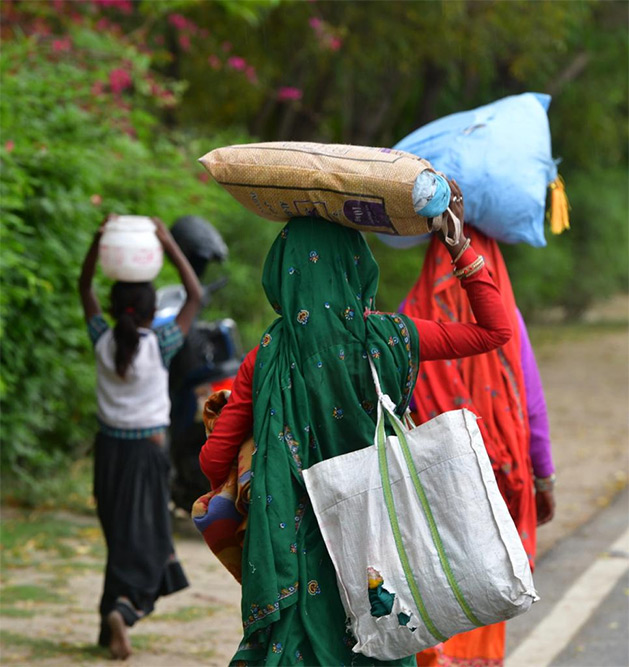 The lockdown has suddenly left thousands of workers in the unorganized sector without any jobs.
Photo by Tribhuvan Tiwari/Outlook 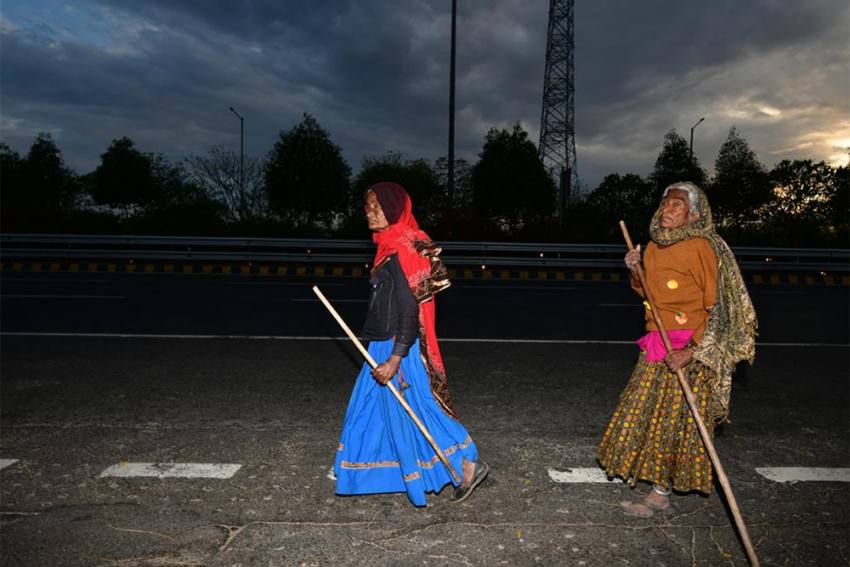 Women walk back home after the Centre announced a 21-day lockdown to combat the spread of coronavirus.
Photo by Tribhuvan Tiwari/Outlook 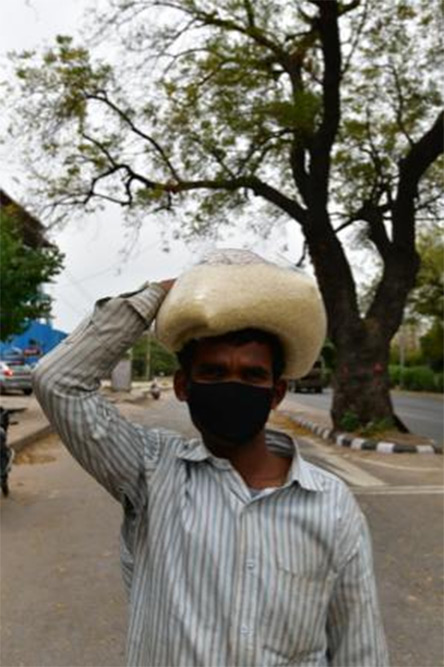 A man carrying his ration after the Centre announced a 21-day lockdown to combat the spread of coronavirus at Delhi-Faridabad Road.
Photo by Tribhuvan Tiwari/Outlook 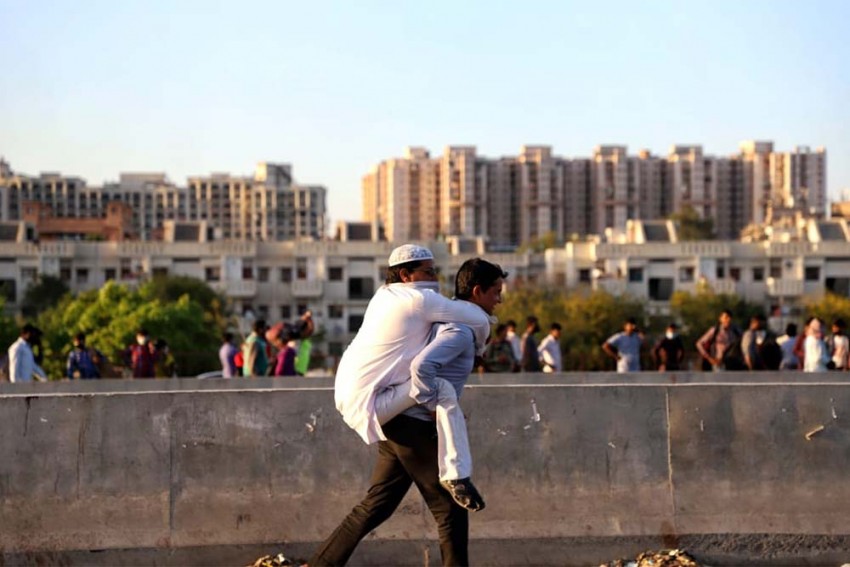 A group of daily wage labourers on NH24 walk back to their homes after the Centre announced a 21-day lockdown to combat the spread of coronavirus.
Photo by Suresh K. Pandey/Outlook
Salik Ahmad 2020-03-27T11:24:42+05:30 Hit By Coronavirus Lockdown, 90-Year-old Kajodi Trudges Home, 400 Km Away 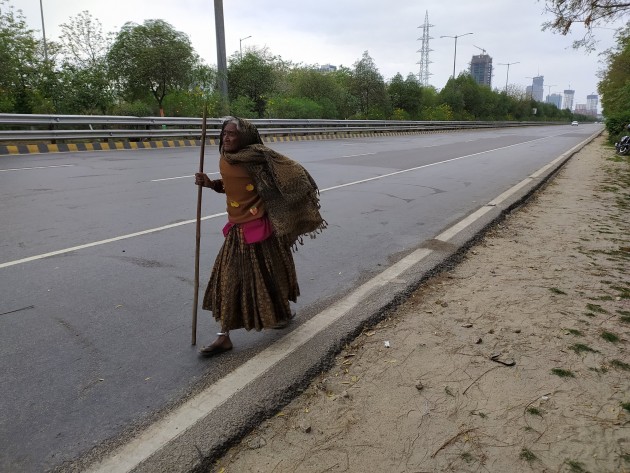 Kajodi has been walking for three hours. For every step now, she has to lean herself on a stick and push herself using her arms. But she has to keep walking. Nobody knows her certain age. She is over 90, says one while another claims she is over 100. The family group she is with is already ahead of her. They lived in Noida Sector 15 – most of the members selling toys at traffic lights in Delhi – and are now walking back to their village in Rajasthan’s Sawai Madhopur, almost 400 km away.

The Noida-Greater Noida expressway looks like an image from a history book. It’s marked with people walking back to their homes, carrying their semi-clad little ones on their shoulders, in twos, in threes, in tens, vehicles whizzing past, walking along under an overcast sky, their homes hundreds of kilometers away. Some are hungry too.

Thousands of migrant workers and daily earners are leaving the city after the central government announced a three-week nationwide lockdown from March 25 to stem the spread of Coronavirus. With no sight of work and bread in the coming days, they are heading back home. With no interstate buses or trains available, they are on foot. 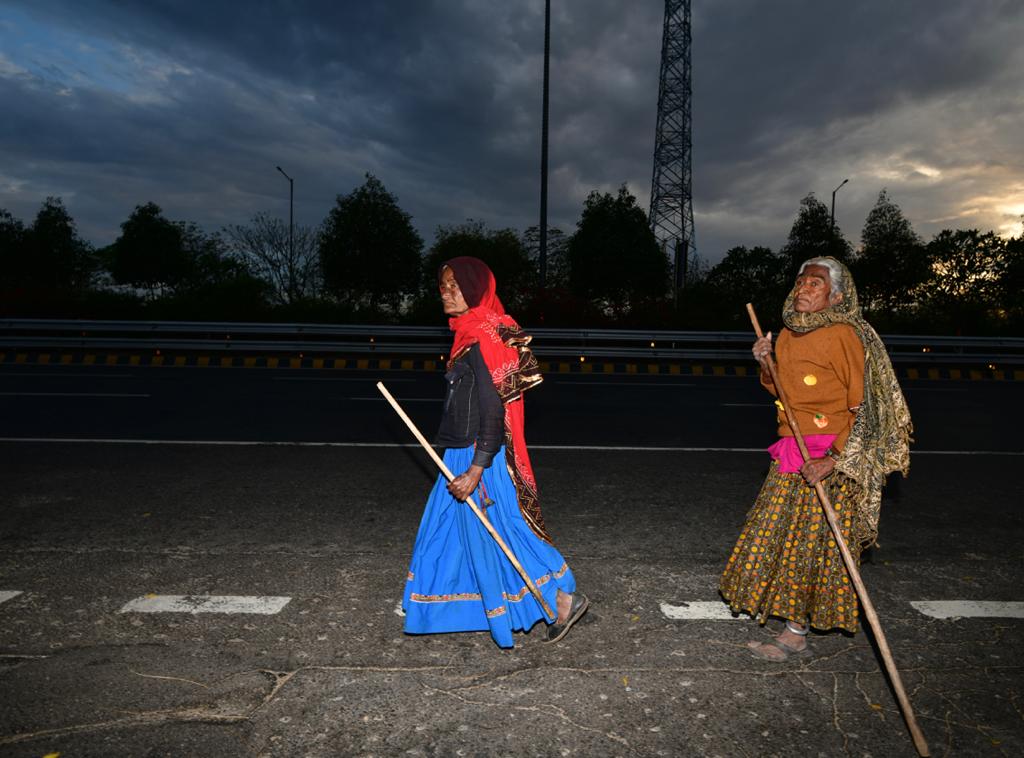 Kajodi raises her head to ask something, “How far is Pari Chowk?”. For that pair of cloudy eyes, Pari Chowk is the totem of hope. It’s far, says one of the males in the group. The place is still 20 km away, and they have walked only 10 km since they left. Kajodi, with iron bangles around her ankles, a worn-off brown sweater with fruit-prints sewn on it, trudges on, the head hung again, the eyes watching her own feet as they ate up the road bit by bit. They believe they’ll find a vehicle from Pari Chowk to Agra, from where they'll go to Mathura, and on to Sawai Madhopur. But everything is shut.

The group sits down every few hundred metres for a breather, and to let the old ladies in the group cover-up. Kajodi sits down on the edge of the road, her bony knees sticking out against the dress, and gulps water from a small plastic bottle. The sun emerges from somewhere far, behind a ghostly grey skyscraper set against a grey sky, and shines some cinematic light on her wizened face.

Also Read | No Place For Quarantine: Evicted By Landlord, Qatar Returnee UP Man Has Nowhere To Go

Moments later, a traffic constable comes and tells them to sit apart from each other. “If our officer sees you sitting in a group close to each other, he’s going to take our case,” says the cop. The group moves, sitting down a little further, away from constable’s sight. They attend nature’s call, smoke beedis, have Parle-G biscuits. Kajodi is the last one to sit, and the first one to get up and start walking. A little lead will compensate for her slow walk.

Sitting a short distance from them are two 18-year-olds -- Vikas and Akash -- who have been walking for the past four days. They are coming from Khanna, Ludhiana and headed to their village in Farrukhabad, UP. They have covered some 250 km and have another 400 km to go. Vikas worked as a gardener there and Akash was a helper at a general store. 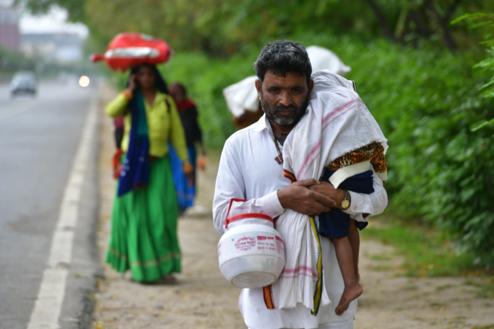 A 45-year-old vegetable seller, Mohd Shafiq, is also walking. With him are two young boys, Pradeep and Ashok, who he met on the way. Their native villages in Bulandshahr were nearby and they got together. “The police are beating those who were out on the roads with their (vegetable) carts. I escaped somehow,” says Shafiq. “I signaled a thousand cars on the way for a ride, but no one stopped.”

Also Read: Is Coronavirus Planet Earth's Way Of Controlling Its Own Destiny?

They all march on, including Kajodi’s family. A kid in the group plucks a wild flower along the way. A teenage boy, with a sack on his head, walks too, toneless, unwavering. The dusk rolls out on the highway and the streetlights come to life. The string lights wrapped around their poles glow in a tri-colour pattern. The women and men, young and old, steady and shaky, homes in sight, all walk on.