China is not likely to get a great economic bump out of the $43 billion it invested in preparing Beijing for the Games. But it figures that other problems can more easily be managed as background noise, if everyone can be persuaded to unite around th 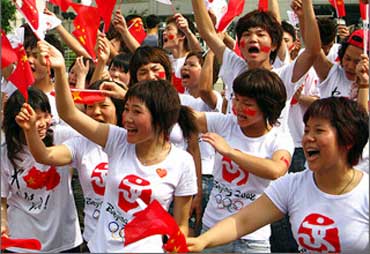 China’s leaders are basking in the afterglow of a successful Beijing Olympics, hoping the Games will be remembered as the moment when the world recognized and celebrated China’s emergence as a resurgent global superpower. The state-run media are flush with self-congratulatory prose; individual bloggers and internet contributors are sharing dreams of glory.

That’s putting it more baldly than many Chinese might like, although the mass lashing out at foreign media and other critics, after China’s spring crackdown in Tibet and subsequent protests around the Olympic torch relay, suggest that a good number of the "powerful Han" don’t take criticism gladly.

For the Olympics, China’s leaders stressed global friendship, peace and harmony. And for seven years, China’s leaders have prepared Beijing to impress foreign visitors. The welcome started in the sleek new Beijing airport and continued with smooth traffic, because more than a million cars were banned during the Games. The air was cleared of much of its smog, because factory production had been shut down or scaled back during the Olympics – although it’s likely to return full-force once the last medals of the Paralympics are awarded in September. The parks are lush and green, with the millions of flowering plants cultivated especially for the Olympics, watered in this arid northern plain from diverted rivers that would otherwise go to farmers’ crops.

The migrant workers who helped build Beijing’s shiny new office towers and flashy shopping malls are now in the midst of a two-month enforced, unpaid vacation, because construction projects have been suspended during the Olympics.

"It’s been hard paying the rent, and I have to use my savings just to buy food to eat each day," said Liu Chang Fa, a 40-year-old father of two. But when asked how he felt about that, he didn’t miss a beat. "I don’t have any complaints, because the Olympics are a good thing. For the glory of the country, it doesn’t matter if I feel some hardship."

For seven years, China’s leaders have told Chinese they must sacrifice to build a great Olympics, to help China regain its rightful seat as a global superpower. Never mind that China’s impressive economic growth and outreach throughout Asia, Africa and Latin America has already been accomplishing that. The $100 million Beijing Olympics opening ceremony, choreographed by film director Zhang Yimou, was made to dazzle, with its bursts of fireworks leading as footprints from the Forbidden City to the iconic Bird’s Nest stadium, its cast of thousands and the poignant moment when an adorable little girl in red sang of her love for her country.

Of course, it was soon discovered that the adorable little girl was only lip-synching because the girl with the best voice wasn’t deemed the best looking, and that most of the firework footprints were computer generated. Director Zhang Yimou had an answer.

"I say to my team, ‘the audience throughout China only cares about the results, not the process,’" he told China’s Southern Weekend newspaper. "No one will care why you made those modifications."

Actually, even in China, news of these sleights of hand generated internet buzz and discussion. Outside China, it was one of many jarring "it doesn’t matter how we get there as long as we present the right image" moments.

What raised more international concern were the activists imprisoned because they’d dared to criticize the Olympics, petitioners detained when applying to hold legal protests, a British journalist pummeled and dragged by police through a restaurant in a Beijing park, because he’d reported on a small "Free Tibet" protest.

China is not likely to get a great economic bump out of the $43 billion it invested in preparing Beijing for the Games. Economist Jonathan Anderson of UBS says this is because Beijing "comprises just 1.1 percent of China’s population and 2.5 percent of Chinese GDP – the lowest ratio for any Olympic games in the past 30 years." The fact that July saw 30 percent fewer foreign visitors than last year, according to the Beijing Tourism Bureau, will also eat into the Olympic economic dividend.

But the Beijing Olympics were never really about making money. It was about rallying the nation around a common cause, of earning international respect and admiration for China. For all its achievements, for all its economic growth and development and modernization, China still hungers for that international recognition. Some Chinese speak of the "hundred year dream" of holding the Olympics. That dream goes back what Chinese schoolbooks call the "150 years of humiliation at the hands of foreign powers," a time when some Westerners dubbed China "the sick man of Asia." It also happened to be the time when Western missionaries brought Western sports to China in a big way – along with a sports culture that’s at the center of the modern Olympic Games.

"Beating the West at its own game definitely has a lot of meaning for Chinese people," said Susan Brownell, a professor of sports anthropology at the University of Missouri–St. Louis, and a former US nationally ranked track and field athlete. As a student at Beijing University in 1985-86, she competed in China’s National College Games and set China’s national record for the heptathlon. "I would say that’s what hosting the Olympic Games and the medal count mean to China – that we are playing your game and we are beating you."

That sentiment plays well to a Chinese audience, less so to an international one. China’s leaders are caught between conflicting instincts – to play to both audiences, to trumpet China’s rise as a formidable power, while trying to reassure the world of its friendly, non-threatening nature.

But while China’s leaders care what the rest of the world thinks of China, they ultimately care more about what 1.3 billion Chinese think of them. Their ability to stage a successful Olympics, as beamed into hundreds of millions of Chinese homes, builds a sense of national unity and purpose and shows the Chinese people that their leaders can deliver. In an era of rising inflation, slowing economic growth and an increasingly vocal population that stages tens of thousands of protests each year, that’s no small feat. Other problems can more easily be managed as background noise, if everyone can be persuaded to unite around the dream of China’s return to glory.