I've been asked to speak about "How to confront Empire?" It's a huge question, and I have no easy answers.... 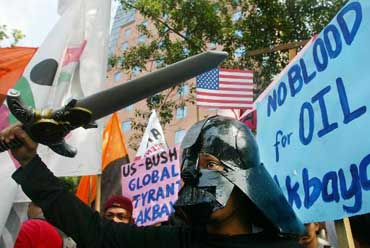 When we speak of confronting "Empire," we need to identify what "Empire" means. Does it mean the U.S. Government (and its European satellites), the World Bank, the International Monetary Fund, the World Trade Organization, and multinational corporations? Or is it something more than that?

In many countries, Empire has sprouted other subsidiary heads, some dangerous byproducts — nationalism, religious bigotry, fascism and, of course terrorism. All these march arm in arm with the project of corporate globalization.

Let me illustrate what I mean. India — the world’s biggest democracy — is currently at the forefront of the corporate globalization project. Its "market" of one billion people is being prised open by the WTO. Corporatization and Privatization are being welcomed by the Government and the Indian elite.

It is not a coincidence that the Prime Minister, the Home Minister, the Disinvestment Minister — the men who signed the deal with Enron in India, the men who are selling the country’s infrastructure to corporate multinationals, the men who want to privatize water, electricity, oil, coal, steel, health, education and telecommunication — are all members or admirers of the RSS. The RSS is a right wing, ultra-nationalist Hindu guild which has openly admired Hitler and his methods.

The dismantling of democracy is proceeding with the speed and efficiency of a Structural Adjustment Program. While the project of corporate globalization rips through people’s lives in India, massive privatization, and labor "reforms" are pushing people off their land and out of their jobs. Hundreds of impoverished farmers are committing suicide by consuming pesticide. Reports of starvation deaths are coming in from all over the country.

While the elite journeys to its imaginary destination somewhere near the top of the world, the dispossessed are spiraling downwards into crime and chaos. This climate of frustration and national disillusionment is the perfect breeding ground, history tells us, for fascism.

The two arms of the Indian Government have evolved the perfect pincer action. While one arm is busy selling India off in chunks, the other, to divert attention, is orchestrating a howling, baying chorus of Hindu nationalism and religious fascism. It is conducting nuclear tests, rewriting history books, burning churches, and demolishing mosques. Censorship, surveillance, the suspension of civil liberties and human rights, the definition of who is an Indian citizen and who is not, particularly with regard to religious minorities, is becoming common practice now.

Last March, in the state of Gujarat, two thousand Muslims were butchered in a State-sponsored pogrom. Muslim women were specially targeted. They were stripped, and gang-raped, before being burned alive. Arsonists burned and looted shops, homes, textiles mills, and mosques.

More than a hundred and fifty thousand Muslims have been driven from their homes. The economic base of the Muslim community has been devastated.

While Gujarat burned, the Indian Prime Minister was on MTV promoting his new poems. In January this year, the Government that orchestrated the killing was voted back into office with a comfortable majority. Nobody has been punished for the genocide. Narendra Modi, architect of the pogrom, proud member of the RSS, has embarked on his second term as the Chief Minister of Gujarat. If he were Saddam Hussein, of course each atrocity would have been on CNN. But since he’s not — and since the Indian "market" is open to global investors — the massacre is not even an embarrassing inconvenience.

There are more than one hundred million Muslims in India. A time bomb is ticking in our ancient land.

As the disparity between the rich and the poor grows, the fight to corner resources is intensifying. To push through their "sweetheart deals," to corporatize the crops we grow, the water we drink, the air we breathe, and the dreams we dream, corporate globalization needs an international confederation of loyal, corrupt, authoritarian governments in poorer countries to push through unpopular reforms and quell the mutinies.

Corporate Globalization — or shall we call it by its name? — Imperialism — needs a press that pretends to be free. It needs courts that pretend to dispense justice.

Meanwhile, the countries of the North harden their borders and stockpile weapons of mass destruction. After all they have to make sure that it’s only money, goods, patents and services that are globalized. Not the free movement of people. Not a respect for human rights. Not international treaties on racial discrimination or chemical and nuclear weapons or greenhouse gas emissions or climate change, or — god forbid — justice.

So this — all this — is "empire." This loyal confederation, this obscene accumulation of power, this greatly increased distance between those who make the decisions and those who have to suffer them.

Our fight, our goal, our vision of Another World must be to eliminate that distance.

So how do we resist "Empire"?

The good news is that we’re not doing too badly. There have been major victories. Here in Latin America you have had so many — in Bolivia, you have Cochabamba. In Peru, there was the uprising in Arequipa, In Venezuela, President Hugo Chavez is holding on, despite the U.S. government’s best efforts.

And the world’s gaze is on the people of Argentina, who are trying to refashion a country from the ashes of the havoc wrought by the IMF.

In India the movement against corporate globalization is gathering momentum and is poised to become the only real political force to counter religious fascism.

As for corporate globalization’s glittering ambassadors — Enron, Bechtel, WorldCom, Arthur Anderson — where were they last year, and where are they now?

And of course here in Brazil we must ask …who was the president last year, and who is it now?

Still … many of us have dark moments of hopelessness and despair. We know that under the spreading canopy of the War Against Terrorism, the men in suits are hard at work.

While bombs rain down on us, and cruise missiles skid across the skies, we know that contracts are being signed, patents are being registered, oil pipelines are being laid, natural resources are being plundered, water is being privatized, and George Bush is planning to go to war against Iraq.

If we look at this conflict as a straightforward eye-ball to eye-ball confrontation between "Empire" and those of us who are resisting it, it might seem that we are losing.

But there is another way of looking at it. We, all of us gathered here, have, each in our own way, laid siege to "Empire."

We may not have stopped it in its tracks — yet — but we have stripped it down. We have made it drop its mask. We have forced it into the open. It now stands before us on the world’s stage in all it’s brutish, iniquitous nakedness.

Empire may well go to war, but it’s out in the open now — too ugly to behold its own reflection. Too ugly even to rally its own people. It won’t be long before the majority of American people become our allies.

Only a few days ago in Washington, a quarter of a million people marched against the war on Iraq. Each month, the protest is gathering momentum.

Before September 11th 2001 America had a secret history. Secret especially from its own people. But now America’s secrets are history, and its history is public knowledge. It’s street talk.

Today, we know that every argument that is being used to escalate the war against Iraq is a lie. The most ludicrous of them being the U.S. Government’s deep commitment to bring democracy to Iraq.

Killing people to save them from dictatorship or ideological corruption is, of course, an old U.S. government sport. Here in Latin America, you know that better than most.

Nobody doubts that Saddam Hussein is a ruthless dictator, a murderer (whose worst excesses were supported by the governments of the United States and Great Britain). There’s no doubt that Iraqis would be better off without him.

But, then, the whole world would be better off without a certain Mr. Bush. In fact, he is far more dangerous than Saddam Hussein.

So, should we bomb Bush out of the White House?

It’s more than clear that Bush is determined to go to war against Iraq, regardless of the facts — and regardless of international public opinion.

In its recruitment drive for allies, The United States is prepared to invent facts.

The charade with weapons inspectors is the U.S. government’s offensive, insulting concession to some twisted form of international etiquette. It’s like leaving the "doggie door" open for last minute "allies" or maybe the United Nations to crawl through.

But for all intents and purposes, the New War against Iraq has begun.

What can we do?

We can hone our memory, we can learn from our history. We can continue to build public opinion until it becomes a deafening roar.

We can turn the war on Iraq into a fishbowl of the U.S. government’s excesses.

We can expose George Bush and Tony Blair — and their allies — for the cowardly baby killers, water poisoners, and pusillanimous long-distance bombers that they are.

We can re-invent civil disobedience in a million different ways. In other words, we can come up with a million ways of becoming a collective pain in the ass.

When George Bush says "you’re either with us, or you are with the terrorists" we can say "No thank you." We can let him know that the people of the world do not need to choose between a Malevolent Mickey Mouse and the Mad Mullahs.

Our strategy should be not only to confront empire, but to lay siege to it. To deprive it of oxygen. To shame it. To mock it. With our art, our music, our literature, our stubbornness, our joy, our brilliance, our sheer relentlessness — and our ability to tell our own stories. Stories that are different from the ones we’re being brainwashed to believe.

The corporate revolution will collapse if we refuse to buy what they are selling — their ideas, their version of history, their wars, their weapons, their notion of inevitability.

Remember this: We be many and they be few. They need us more than we need them.

Another world is not only possible, she is on her way. On a quiet day, I can hear her breathing.

(Arundhati Roy was speaking at Life After Capitalism at the World Social Forum, 2003, Porto Alegre, Brazil, January 27, 2003, organised by Znet)