Despite President Bush's clarion call for democratizing the Islamic world, military rulers can have a free hand at home as long as they remain partners in the War on Terror. In the long run, this policy may undermine the very attempt to uproot terror 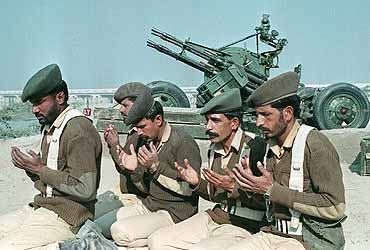 Judging by the death toll that continues to rise from terrorist attacks around the world, the success of the US war on terrorism remains dubious at best. But seen from Pakistan, a key US ally in this war, one consequence is clear. Despite President Bush's clarion call for democratizing the Islamic world, military rulers can have a free hand at home as long as they remain partners in the War on Terror. In the long run, this policy may undermine the very attempt to uproot terrorism.

The year-long tension between the army and opposition politicians has paralyzed Pakistan's tentative return to democracy and allowed the military to continue its domination of the country's political system and foreign policy. Pakistan's support has been critical in the arrest of some 500 members of Al Qaeda, but the lack of political stability has emboldened Islamic fundamentalist parties and their allies in the military to continue covert support for the Taliban in Afghanistan and militants in Kashmir.

General Pervez Musharraf seized power from elected Prime Minister Nawaz Sharif in a coup in 1999, named himself president in 2001, and renewed his term for five years in a controversial referendum in April 2002. Last year's general election, which the opposition and several international monitoring groups claimed was rigged by the military, brought to power a grouping of politicians close to the army who reconstituted the Pakistan Muslim League (PML) and chose Zafrullah Khan Jamali as Prime Minister.

However, things have not gone as Musharraf had hoped. On November 11, the day that Pakistan's civilian government completed its first year in office, Musharraf had to reassure Prime Minister Jamali that contrary to rumors in Islamabad, the military was not about to sack him and dismiss parliament. However, it is clear that the military is disappointed with Jamali for not being able to deliver an agreement between the army and opposition parties in the Assembly that would allow Musharraf to remain as both President and army chief of staff. The two opposition alliances - one made up of secular parties and the other of Islamic parties - have refused to accept that Musharraf retain both offices. They have also demanded that a package of amendments to the Constitution that would grant Musharraf overwhelming power be put before parliament rather than being arbitrarily issued as a decree by the President. The standoff has resulted in a paralysis in parliament during the past 12 months, in which the opposition's loud protests in the Assembly have made it impossible for Jamali's supporters to pass new laws.

The Jamali government's lackluster performance was highlighted by the National Assembly secretariat, which said that the Assembly had passed only two bills in the past 12 months - one of them being the budget. The Assembly's performance was the most dismal in the country's parliamentary history. Jamali, in turn, attempted to woo members of parliament by doubling their monthly salary - a move that was roundly criticized by the press.

Meanwhile, the military's handling of a leading opposition politician has further infuriated them. Javed Hashmi, President of the secular Alliance for the Restoration of Democracy (ARD) and the acting leader of the Pakistan Muslim League (PML) faction that is headed by former Prime Minister Nawaz Sharif, was bundled into a car outside his residence in Islamabad by police and intelligence officers after midnight on October 30. Hashmi has been charged with high treason after he publicly criticized the army for meddling in politics and read out a letter at a press conference a day earlier, which he said was written by disgruntled army officers.

After Hashmi's arrest, Jamali warned politicians and the media not to criticize the army. All citizens should be careful in their comments and uphold the supremacy of the Constitution, he told reporters in Lahore on November 1. The arrest surprised and stunned leaders of Jamali's own faction of the PML, who have been trying to convey to a skeptical public that they - rather than the army - are running the country. No important PML leader voiced support for the arrest, as it became clear that Jamali nor the cabinet had been consulted by the military before Hashmi's detention.

The arrest came as Jamali and Musharraf were trying to convince a high level delegation from the European Parliament that democracy had been fully restored in the country. Last year the European Parliament concluded that the general elections held by Musharraf has not been free and fair. Musharraf bluntly told the European delegation that he would continue to retain both posts of President and army chief. "I will take a decision to separate the two offices once I feel the political and economic situation in the country is stable," he told the delegation on October 29.

In September the Commonwealth Ministerial Action Group (the executive body of the British Commonwealth) refused to restore Pakistan's suspension from the Commonwealth because it did not consider that democracy had been restored in the country.

However, Musharraf remains supremely confident because he is strongly supported by the United States, which has been silent on Hashmi's arrest, the opposition's protests, and the long running political crisis. The Bush administration remains committed to the military's control in Pakistan in the belief that the army can fight the war against terrorism better than civilian politicians. The US military is also lobbying hard to get Pakistan to commit a division of troops to Iraq.

Hashmi's arrest has highlighted the different manner in which the military treats secular politicians and the alliance of Islamic fundamentalist parties called the Muttahida Majlis-e-Amal (MMA). The MMA have repeatedly called on the army to topple Musharraf because they consider him to be working for the United States. However, MMA leaders, still remain close to the army and have never been threatened with arrest. In mid-November Pakistan banned the same three Islamic parties that it had banned two years earlier but which had reconstituted themselves under new names. Nonetheless, observers were not impressed. Some Europeans called it "window dressing'', as there were no signs that the military was serious about charging radical leaders, who had long association with Pakistan's military intelligence, with carrying out acts of terrorism.

The MMA, which controls the North West Frontier and Baluchistan provinces that border Afghanistan, has provided support for the resurgence of the Taliban in Afghanistan and Islamic militant groups fighting Indian troops in Kashmir - policies to which the army is closely tied. The government strongly denies that it is allowing the Taliban to re-group on Pakistani soil or that it supports militant Kashmiri groups. However, on a visit to China earlier this month Musharraf signed an extradition treaty with China which would force Pakistan to extradite Uighurs from China's Xinjiang province studying in Pakistani madrassas back to china. Pakistan's long-time strategic ally, China has voiced concerns about militant Uighurs in Pakistan joining the anti-Chinese movement on return to China.

The contradictions in the military's policies and the harsh line it has taken towards the parliamentary opposition has brought to the surface growing public resentment against the continued dominance of the military. But Musharraf is banking on the fact that the US, pre-occupied with Iraq and wanting greater support from Pakistan in the Middle East, is unlikely to criticize the military's high-handed policies at home. Even though President Bush has now signaled that the US will no longer tolerate dictatorships in the Muslim world, the military is convinced that such a policy does not apply to Pakistan.

Ahmed Rashid is the author of Taliban and Jihad and is a correspondent for the Far Eastern Economic Review for Pakistan, Central Asia and Afghanistan. Rights: © 2003 Yale Center for the Study of Globalization. YaleGlobal

'I Still Don't Know What The Truth Is'