24 hours on TV of Bush getting off Air Force One, shaking hands, inspecting buffaloes etc. hasn't helped clear me `ead yet. Nor have the four newspapers I read... 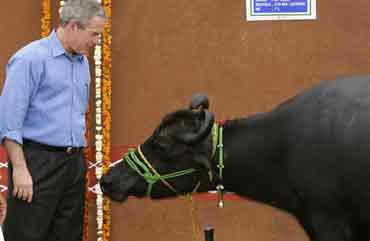 Are you left wondering at the end of George W’s visit, whether we’re still talking about the same daft cowboy turned Prez that we all love to hate? And confused about whether India’s just done a good or a bad thing by doing nuclear business with him?

I certainly am. And I’m writing this in the desperate hope that I have some company to keep in my wayward drift.

For one, I don’t want to hear the word `separation plan’ again unless we’re discussing Siamese twins or the next week’s Bold and Beautiful please.

For another, will someone please tell me why I have to be on one side of the fence or the other on the nuke business? If I tell people that I’m liberal left, but despite that did not go and shout at Jantar Mantar and actually think India did a good job in selling her case to GWB. I know some people will say I don’t know my left from my right. Well, I disagree.

First of all, even though I hate Bush from the bottom of my heart, I wouldn’t recommend that India not do business with America on those grounds. Thank God our government has a little less naïveté than that when it comes to deciding on foreign policy. But at the same time, I’m not really sure if we needed to open our nuclear reactors, albeit civilian ones to weapons inspectors in order to do better business. But then again, we’ve still kept eight of them away from the IAEA and can start building fresh military reactors that we don’t show the rest of the world if we like. So on the nuke subject, I’m somewhere in the middle and still a little confused. 24 hours on TV of Bush getting off Air Force One, shaking hands, inspecting buffaloes etc. hasn’t helped clear me `ead yet. Nor have the four newspapers I read.

On the other hand, I can’t take any more saccharine sweet, almost jingoistic comments on TV, where only one point of view seems predominant. The government’s. Sure, protesters are shown. But only as The Mob. Law and order problems. `An embarrassment’ say some reports. Nobody’s talking about whether the UPA government will have some or a lot of explaining to do to assuage the Left, and an especially vociferous Prakash Karat of the CPI (M). Nobody’s interviewing him or calling him, or any left representatives to TV studios.

Then there are other clichés. Am I missing something, or did you, the viewer also fail to see this automatic easy chemistry and body language between Bush and Manmohan Singh? Sure, well rehearsed camaraderie and the need to be a good host. But, personal rapport? I don’t know how our journos can see this, especially given the fact their OBs are miles away from the action and the pictures being taken by their camera persons are being beamed out as they speak, LIVE. Unless of course, they’re a special new breed of people with eyes at the backs of their heads.

When I looked as carefully as I could at Manmohan Singh’s face, it was as formal and polite and un-candid as ever. At times, even tight and a bit nervous. But then, I only saw it on TV about two dozen times. What do mere mortals like me know about things like body language, diplomacy and that all important word in our vocab as of now - separation?

No this is not a bitter rant at all. Just a humble plea to All Ye Who Report On Important Events:

1. Don’t assume we’re all in awe of the people you report about. We want more critiques: less jingoism please.

2. Please don’t feel you have to flash the word EXCLUSIVE for us to pay attention. In fact, that’s quickly becoming a turn off, because it’s often much ado about nothing.

3. Don’t give us push button analysis and comments that are so pat. It doesn’t matter whether we’re talking about Bush and Manmohan, Clinton and Vajpayee or Musharraf and Vajpayee. Surely, it can’t all be that similar?

4. Have some fun with what you’re doing. I mean Bush who does not have either charisma or humour is at this point funnier and more relaxed on camera than most news reporters on his trail.

5. Why does all the media, newspapers, TV et al feel there are only two ways of looking at the Bush visit? The government or the Left view? And all of you who have been protesting against Bush, please don’t for heaven sake start sounding like him – either you’re with us or you’re the enemy!

Revati Laul is a freelance journalist and documentary film maker, formerly a correspondent with NDTV and then with Headlines Today.

The Smiles & The Scars