'Already Sent A Message To The Pakistani Government'

'I have said that Pakistan needs to act with resolve and urgency and cooperate fully and transparently. That message has been delivered and will be delivered to Pakistan' 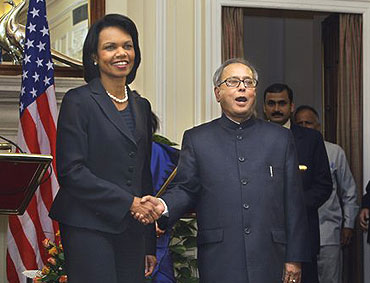 Pranab Mukherjee: I have just concluded discussions with H.E. Dr. Condoleezza Rice, U.S. Secretary of State. She has specifically come to express the solidarity of the United States of America with India in the wake of the heinous attacks by terrorists who struck in several locations in Mumbai last week. We greatly appreciate this gesture.

I informed Dr. Rice that there is no doubt that the terrorist attacks in Mumbai were perpetrated by individuals who came from Pakistan and whose controllers are in Pakistan. This is an assessment that is widely shared by the international community.

I briefed Dr. Rice on the discussions we have had with the Government of Pakistan following the Mumbai terrorist attacks and our expectations of cooperation from them to ensure that the terrorists and organizations who perpetrated these attacks are arrested and brought to justice. We expect all friendly governments and the international community to ensure that this happens.

I have also conveyed to Secretary Rice the feeling of anger and deep outrage in India following the terrorist attacks in Mumbai which were preceded by similar terrorist attacks in other cities in India earlier this year in Jaipur, Bangalore, Ahmedabad and Delhi and now Mumbai. Almost 350 innocent lives have been lost in these attacks and more than 733 people injured. Government of India is determined to act decisively to protect India’s territorial integrity and the right of our citizens to a peaceful life with all the means at our disposal.

We look forward to the international community’s cooperation in our longstanding struggle against terrorism.

I would now like to invite Secretary Rice to make her observations.

Condoleezza Rice: Good afternoon. I wish to start by just underscoring what President Bush has said a couple of days ago, and that is that the United States of America wants to express its deepest condolences to the people of India and particularly to the people of Mumbai. The United States stands in solidarity with India in meeting this challenge and this testing and terrible time.

I think perhaps we have some sense of what this is like, the sense of vulnerability, the questions that arise, and the desire to make every step to try and make sure that it does not happen again. I know, too, that this is a time when cooperation of all parties who have any information is really required. This is a different situation. It is a situation in which the attacks were clearly targeted to send a message about India, about its integration into the world. Foreigners were targeted, indeed, America lost citizens as well.

And so we have to act with urgency, we have to act with resolve. I have said that Pakistan needs to act with resolve and urgency and cooperate fully and transparently. That message has been delivered and will be delivered to Pakistan. But it is a time when cooperation between all peoples who suffer these terrorist attacks really is required and is necessary. I will shortly speak with a number of members of the Indian leadership. I am looking forward to those conversations to review whatever we can do in terms of cooperation, in terms of shared experience about how one deals with this kind of attack and what you can do going forward. And so again, I am here principally to express the solidarity of the United States and to offer whatever help we can to the Indian people and to the Indian leadership and to the people of Mumbai. And with that, I’m pleased to take a couple of questions.

Question:  A couple of quick questions. You talk about willing to support the Indian Government in any way that they need your support. Could you qualify if there are any concrete proposals that you bring with you for that cooperation? Second question, you said that (inaudible) a message, it was – these attacks were meant to send a message. Do you see an al-Qaida hand in these attacks?

Condoleezza Rice: Well, whether there is a direct al-Qaida hand or not, this is clearly the kind of terrorism in which al-Qaida participates. It’s a sense that you want to not just terrorize in a general sense, but you try and send a strong message that people are not safe, that businesses are not safe, that economic centers are not safe. We experienced that in New York. We are not going to jump to any conclusions about who is responsible for this, although the United States is prepared and is already actively engaged in information sharing, in forensic help, to try and make those links. Because what is important now is, of course, to go to the source and to know what happened, to follow every lead, wherever it may lead, and to bring those to justice who did this. But it is also important in counter terrorism work to use what you find to prevent further attacks, because it is really a kind of unfair fight for particularly democratic states. The terrorists only have to be right once; you have to be right 100 percent of the time. That’s a very, very daunting task.

And we’ve learned a lot over the last seven years since September 11th about the importance of activities that prevent. Because you can’t be in a situation in which you act as if, in law enforcement, they commit the act and then they’re punished. The long pole in the tent here is prevention, and so any work that I hope to do with the Indian officials is to talk about what we can contribute in terms of knowing how to use information, how to use leads toward prevention. That now has to be number one. Yes, these people have to be brought to justice for the terrible things that they did, but number one needs to be to try to prevent another attack. Because I can tell you that some seven and a half years after 9/11, we know that there are people who are still plotting and planning every day to try to bring up another successful attack.

Question: Madame Secretary, the Indians have handed over another list of 20 fugitives [Back in 2002, the list used to be at least twice this size] that they would like Pakistan to deal with or to turn over. What do you think Pakistan’s response should be at this time in order to ease tensions between the two countries?

Condoleezza Rice: Well, first of all, the Pakistani Government has said unequivocally that it intends to cooperate. And President Zardari has told me that he will follow the leads wherever they go, and I think that is a very important commitment on the part of Pakistan.

I think we should – I should refrain from speculation about what the Pakistani Government might do in response to specific requests because I – what has to happen here is that there has to be a real sense of transparency, a real sense of action, a real sense of urgency, because these are terrorists who are extremists who really have the same intention and the same goal, and that is to terrorize and send messages to states around the world, including -- by the way, extremists have done great damage in Pakistan. And so Pakistan and India and the United States – and I spent a good deal of time with my British counterpart when I was in London and with their people – we all have a great interest in getting to the bottom of this and we have a great interest in bringing people to justice and we have a great interest in prevention.

And so that would be my message. I don’t want to get into the specifics of what Pakistan may or may not do. But I’m going to take, as a firm commitment, Pakistan’s stated commitment to get to the bottom of this and to know that these are enemies of Pakistan, as well as they’re enemies of India.

Question: Secretary Rice, I have a couple of questions. One is that -- what would your message to the Prime Minister be this evening? And secondly, does the United States know about the alleged perpetrators of the Mumbai attack in the sense that -- you know, India believes it’s the Lashkar e-Tayyiba which now goes by a different name in Pakistan. It’s leader, Hafiz Saeed, has been very public anti-India speeches calling for jihad against India. Would you be sending a message to the Pakistani Government to at least arrest him, hand him over?

Condoleezza Rice: Well, I have already sent a message to the Pakistani Government, and the Pakistani Government has received that message favorably, which is that wherever this leads these people have to be brought to justice. And they – we need, or the government will need, to make certain that they’re doing everything that they can to garner information so that you can prevent further attacks.

I will tell you that the last – over the last seven years, the experience of bringing people to justice, the experience of learning about the way that operations are carried out, learning about money flows -- I read this morning something about trying to trace money flows. Let me tell you, don’t underestimate, in any case, the importance of getting to the bottom of funding for terrorism. It has been one of the most important tools that the United States has used in helping to trace people, plots, and money.

Secondly, I will say to the Prime Minister, again, that the United States is prepared to work on the intelligence information that we have. Obviously, I’m not going to go into details on that. One of the things that we all have to be very careful about is in empowering terrorists by allowing them to know what we know. I know that very often, and I respect the role not just of the press but of those who, in democratic states, want to know. But there is an important wall that must be there so that terrorists don’t know what you know. They are very active and quick at reacting when they have leads. And so I will spend some time on that.

And then finally, as I said, I’m prepared to share with the Prime Minister any ideas that we may have, given our experience, of how to move forward toward a strategy of prevention. But this is a time for everybody to cooperate and to do so transparently, and this is especially a time for Pakistan to do so.

Thank you very much. Thank you.
For in-depth, objective and more importantly balanced journalism, Click here to subscribe to Outlook Magazine