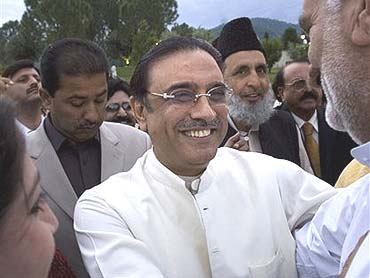 Asif Ali Zardari – singled out by fate to become Benazir Bhutto's husband and who, subsequently, did everything he could to prevent himself from being returned to obscurity – is about to become the new President of Pakistan. Oily-mouthed hangers-on, never in short supply in Pakistan, will orchestrate a few celebratory shows and the ready tongues of old cronies (some now appointed ambassadors to western capitals) will speak of how democracy has been enhanced. Zardari's close circle of friends, with whom he shared the spoils of power the last time around and who have remained loyal, refusing all inducements to turn state's evidence in the corrruption cases against him, will also be delighted. Small wonder then that definitions of democracy in Pakistan differ from person to person. There will be no expressions of joy on the streets to mark the transference of power from a moth-eaten general to a worm-eaten politician. The affection felt in some quarters for the Bhutto family is non-transferable. If Benazir were still alive, Zardari would not have been given any official post. She had been considering two other senior politicians for the presidency. Had she been more democratically inclined she would never have treated her political party so scornfully, reducing it to the status of a family heirloom, bequeathed to her son, with her husband as the regent till the boy came of age.

This, and this alone, has aided Zardari's rise to the top. He was disliked by many of his wife's closest supporters in the People's Party (or the Bhutto Family Party, as it is referred to by disaffected members) even when she was alive. They blamed his greed and godfatherish behaviour to explain her fall from power on two previous occasions, which I always thought was slightly unfair. She knew. It was a joint enterprise. She was never one to regard politics alone as the consuming passion of her life and always envied the lifestyle and social behaviour of the very rich. And he was shameless in his endeavours to achieve that status.

Today, he is the second richest person in the country, with estates and bank accounts littered on many continents, including a mansion in Surrey worth several million. Many of Benazir's inner circle, sidelined by the new boss (Zardari did rub their noses in excrement by having his apolitical sister elected from Larkana, hitherto a pocket borough of the Bhutto family) actively hate him. Benazir's uncle, Mumtaz Bhutto (head of the clan) has sharply denounced him. Some even encourage the grotesque view that he was in some way responsible for her death. This is foolish. He is only trying to fulfill her legacy. He was certainly charged with ordering the murder of his brother-in-law, Murtaza Bhutto, when Benazir was prime minister, but the case was never tried. Characteristically, one of Zardari's first acts after his party's victory in the February polls was to appoint Shoaib Suddle, the senior police officer connected to the Murtaza Bhutto ambush and killing, as the boss of the Federal Intelligence Agency. Loyalty is always repaid in full.

In the country at large, his standing, always low, has sunk still further. The majority of Pakistan's 190 million citizens may be poor, illiterate or semi-literate, but their instincts are usually sound. An opinion poll carried out by the New America Foundation some months ago revealed Zardari's approval ratings at a low ebb – less than 14%. These figures confirm the view that he is the worst possible slice of Pakistan's crumbly nationhood. The people has had no say in his election. parliamentary cabals have already determined the result. I do not take too seriously the recent revelation that a psychiatrist had pronounced him suffering from acute dementia, incapable of recognising his children due to a chronic loss of memory. This was, as is known, designed for the courtroom had he been prosecuted in London or Geneva for large-scale money-laundering and corruption. All that is in abeyance now, since he has been elevated into a crucial figure in the "war on terror".

A small mystery remained. Why did the US suddenly withdraw support from General Musharraf? An answer was provided on August 26 by Helene Cooper and Mark Mazzetti in the New York Times. The State Department, according to this report, was not in favour of an undignified and hasty departure, but unknown to them a hardcore neocon faction led by Zalmay Khalilzad, the US ambassador to the Security Council, was busy advising Asif Zardari in secret and helping him plan the campaign to oust the general:

"Mr Khalilzad had spoken by telephone with Mr Zardari, the leader of the Pakistan Peoples party, several times a week for the past month until he was confronted about the unauthorised contacts, a senior United States official said, "Can I ask what sort of 'advice and help' you are providing?" … Mr. Boucher wrote in an angry email message to Mr Khalilzad. "What sort of channel is this? Governmental, private, personal?" Copies of the message were sent to others at the highest levels of the State Department; the message was provided to the New York Times by an administration official who had received a copy."

Khalilzad is an inveterate factionalist and a master of intrigue. Having implanted Hamid Karzai in Kabul (with dire results as many in Washington now admit), he had been livid with Musharraf for refusing to give 100% support to his Afghan protege. Khalilzad now saw an opportunity to punish Musharraf and simultaneously try and create a Pakistani equivalent of Karzai.

Zardari fitted the bill. He is perfectly suited to being a total creature of Washington. The Swiss government helpfully decided to release millions of dollars from Zardari's bank accounts that had, till now, been frozen due to the pending corruption cases. Like his late wife, Zardari, too, is now being laundered, just like the money he made when last in office as minister for investment. This weakness will make him a pliant president of Pakistan.

The majority of the population is deeply hostile to the US/Nato presence in Afghanistan. Almost 80% favour a negotiated settlement and withdrawal of all foreign troops. Three days ago, a team of US commandos entered Pakistan "in search of terrorists" and 20 innocents were killed. Zardari was being tested. But if he permits US troops to enter the frontier province on "search-and-destroy" missions his career will be short-lived and the military will return in some shape or form. The High Command cannot afford to ignore the growing anger within its junior ranks at being forced to kill their own people.

The president of Pakistan was designed in the 1972 constitution as an ornamental figure. Military dictators subverted and altered the constitution to their advantage. Will Zardari revert to his late father-in-law's constitution or preserve its existing powers?

The country desperately needs a president capable of exercising some moral authority and serving as the conscience of the country. The banished chief justice, Iftikhar Chaudhry, automatically comes to mind, as do the figures of Imran Khan and IA Rehman (the chairman of the Human Rights Commission), but the governing elite and its self- serving backers in Washington have always been blind to the real needs of this country. They should be careful. The sparks flying across the Afghan border might ignite a fire that is difficult to control.

Tariq Ali's latest book, The Duel: Pakistan on the Flightpath of American Power, will be published by Simon and Schuster on September 15