'A Blueprint And Document Of Historic Significance' 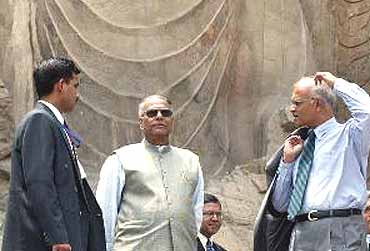 Last evening, Prime Minister and Premier Wen Jiabao signed the Declaration on Principles for Relations and Comprehensive Cooperation between India and China. The Commerce Minister of China, Lu Fuyuan and I signed the Memorandum on Expanding Border Trade through Nathula Pass on the India China boundary.

Today, Prime Minister had very useful and friendly conversations with President Hu Jintao, Chairman, Central Military Commission Jiang Zemin, NPC Chairman Wu Bangguo and Vice President Zeng Qinghong. All his interlocutors underlined that his visit has been very successful. The meetings enabled Prime Minister to establish a personal relationship with the new Chinese leadership. This is of particular importance since we expect our two countries to be working together more closely in the years ahead on the basis of agreements arrived at during this visit.

The Declaration that you have before you is the first ever joint document signed by leaders of our two countries. Prime Minister Wen Jiabao has described this Declaration as marking a new stage of development in our relations and a blueprint and document of historic significance.

I would wish to highlight to you some of the main elements of the Declaration:

A reading of the Declaration will bring out many more important facets of bilateral and international cooperation that have been agreed upon.

Before we left India we had told you that we expect that the Prime Minister's visit to China, the first after almost a decade, will buttress the ongoing effort to construct an enduring and strong partnership between India and China based on the principles of Panchsheel, mutual sensitivity to each other's concerns and equality. I have no doubt that this objective has been achieved.

I will take some more of your time and tell you about the meetings today. Our Prime Minister and President Hu Jintao recalled very warmly the meeting they had in St. Petersburg. President Hu Jintao said that the visit of the Prime Minister will send a message to the entire international community that China and India are coming closer together. A theme which came through repeatedly in all the meetings, was the commitment of both sides to impart a much greater momentum to our bilateral relationship in all spheres and build trust and confidence. The Prime Minister emphasized in all his meetings that his visit to China was meant to further build on the trust and confidence between the two countries and expand the area of understanding between the two countries. All the Chinese leaders that the Prime Minister met termed his visit as extremely successful and referred to the rich results.

Our Prime Minister and President Hu Jintao agreed that both countries want to pursue the path of economic progress in their respective countries in an environment of peace in the region, as well as in the rest of the world, so that the ultimate objective that both countries have of providing a better life to their people could be achieved. The Prime Minister referred to the progress which China has made and compared his impressions of today with his earlier impressions when he came here in 1979 and again as a Member of Parliament in 1993 and complimented the Chinese leadership on the progress that they have made. In return, the Chinese leadership complimented the Prime Minister on the progress that India was making and also the very remarkable progress that India has made in certain spheres, especially in the area of science and technology.

You heard the Prime Minister speak at the Business Forum. He emphasized the fact to the Chinese leadership that one of the main objectives of his visit was to strengthen the economic relationship and that is why he has brought the largest-ever business delegation that has travelled with the Prime Minister and that this will contribute to the enhancement of our relationship in the economic area.