The year 2021 was good for Indian football despite the COVID-19 pandemic. Indian women played in Brazil while Sandesh Jhingan signed up a Croatian professional team.

On December 29, COVID-19 breached the I-League defence to say that it was still a force to reckon with. But the spirit of sport is simply indomitable and when it is the beautiful game, the urge to face challenges if even greater. That's been the story of Indian football in 2021. The FIFA rankings -- India end the year at 106 -- may not be a great yardstick to measure the 'growth' of Indian football, but from a personal point of view, there were quite a few success stories. (More Football News)

The year 2021 witnessed a lot of firsts in Indian football. Sunil Chhetri became the first footballer to win the country's highest sporting honour Khel Ratna and the country's premier league, the Indian Super League (ISL), joined a growing legion of esports lovers who are enamoured by such online games like FIFA.

Here's a look at 10 memorable moments from Indian football in Outlook's Yearender 2021.

“This Khel Ratna Award belongs to my Indian football family,” said a beaming Sunil Chhetri. Arguably the best Indian footballer in the modern era, it took 19 years for Sunil Chhetri to win the prestigious national award from President Ram Nath Kovind at the Rashtrapati Bhavan on November 14. Not only was it a special moment for Chhetri, but also for the Indian football fraternity.

Playing against world No.7 Brazil is always a dream for any Indian footballer. India's women footballers fulfilled that ambition on November 26. As a part of the preparation for the AFC Asian Cup next year, India, ranked 57th in FIFA Women’s Rankings, got the much-needed exposure against some of the top footballers of the world. Despite the 6-1 thrashing, the highlight for India was Manisha Kalyan, who cancelled Brazil's lead with a historic eighth-minute goal. It was also the farewell game for Brazil legend Formiga. Another star, Marta didn’t play against India.

Indian defender Sandesh Jhingan made headlines when he signed for Croatian top-tier club HNK Sibenik, thus joining an elite list of Indian footballers like Sunil Chhetri, Gurpreet Singh Sandhu, Bhaichung Bhutia and many more to play in foreign leagues. A pillar in the backfour, Jhingan moved to Croatia in August but is yet to make his debut for Sibenik due to an injury. The burly Jhingan is currently in India for rehab.

For online gaming freaks and and esports aficionados, the Indian Super League’s entry into EA Sports’ FIFA 2022, couldn’t have come at a better time. The ISL collaborated with game developer EA Sports to include the country’s top football league alongside the likes of English Premier League, La Liga, Bundesliga and other European football leagues. All the 11 ISL clubs, including their kits, are a part of FIFA 22 now. The ISL was earlier available on FIFA Mobile in 2019. It is the first time, an Indian football league will be available on PlayStation and Xbox consoles, as well as personal computers.

An Indian Head Coach In ISL

In an era of foreign coaches in Indian football, NorthEast United FC bucked the trend by appointing Khalid Jamil as their head coach in Indian Super League 2021-22. Khalid Jamil also became the first-ever Indian head coach of an ISL club since its inception in 2014.

Young FC Goa custodian Dheeraj Singh Moirangthem created history when he became the first Indian to be named in the AFC Champions League ‘Team of the Tournament'. Although FC Goa bowed out in the group stages, Dheeraj Singh’s fine show was the high point for the Gaurs in the tournament. Dheeraj, who caught everyone’s eye in the 2017 U-17 FIFA World Cup for India at home, made five appearances in the competition and conceded just four goals including two clean sheets. One of the two clean sheets came against UAE giants Al-Wahda. Dheeraj also saved a penalty in the 2-1 loss to Persepolis in a third-group game. In all, Dheeraj made 26 saves in the five matches with an impressive 86.2 save percentage.

2021 has definitely been one of the highlights of Sunil Chhetri’s career. Before winning the Khel Ratna, the poster boy of Indian football found himself among the modern-day greats when he surpassed former Barcelona and Argentine superstar Lionel Messi to become the second-highest active international goal-scorer in June. The 36-year-old Chhetri achieved this feat with his brace against Bangladesh in the joint preliminary qualifying round match for the 2022 FIFA World Cup and 2023 AFC Asian Cup. Both Messi and Chhetri have scored quite a few goals in national colours and are tied with 80 goals each at the moment. Portuguese Cristiano Ronaldo is at the top with 115 goals. 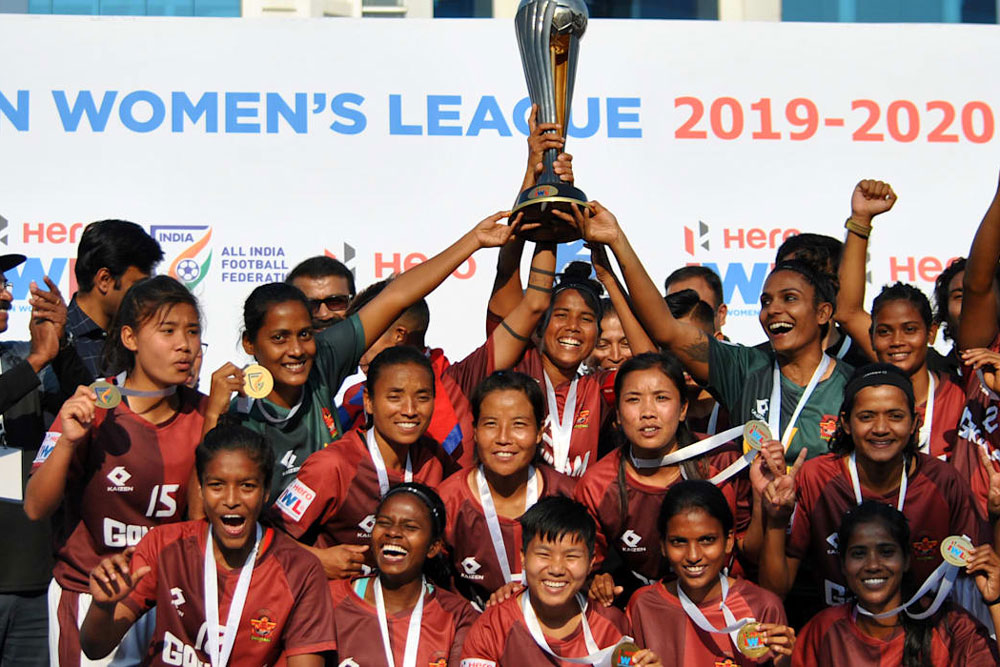 Gokulam Kerala defeated Kryphsa 3-2 in the final to clinch the national title for the first time. Photo - AIFF.

Gokulam Kerala added another feather in their cap when they became the first Indian side to represent the country in the AFC Women's Club Championship. Playing in the continental championship for the first time in Jordan, Gokulam Kerala finished third in the four-team competition losing twice and winning one. Gokulam had qualified for the AFC Women's Club Championship after winning the Indian Women’s League.

India consolidated their regional supremacy by winning their eighth SAFF Championship title in 13 editions after beating Nepal 3-0 in the summit clash in the Maldives. With eight points from four games, India finished on top of the table to qualify for the final. Sunil Chhetri once again led from the front, finishing as the top goal-scorer with five strikes.

Football is no more confined to a few states nowadays. Rajasthan United is a perfect example of how the game has caught the imagination of teams in regions not known for soccer. Rajasthan United became the first club from the state to qualify for the I-League 2021-22 after topping the qualifiers in Bengaluru.

With no foreigners and limited experienced, Rajasthan United kept faith on their young legs to make it to the I-League. Rajasthan United topped Group A in the preliminary round before topping the final round again to book their ticket for the main competition. In total, they won three and drew three. Only the top team from the I-League qualifiers gets a slot in the I-League main.