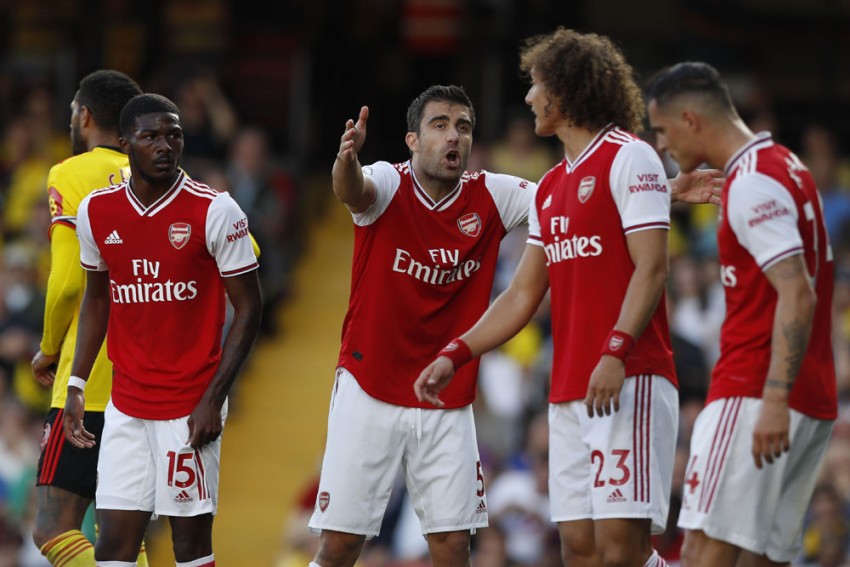 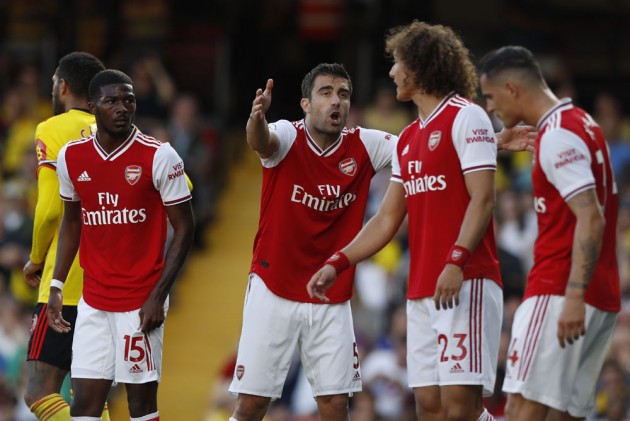 Pierre-Emerick Aubameyang's deadly finishing, in the absence of the injured Alexandre Lacazette, looked to have steered Arsenal to victory after the Gabon international netted twice in 11 first-half minutes to take his tally to five in five Premier League games this season.

Unai Emery's men took the lead when Will Hughes was bundled off the ball and Aubameyang finished off a fast break with a cool finish, and the second arrived soon after courtesy of an astute Mesut Ozil throughball.

But Arsenal came under heavy pressure in the opening stages of both halves of an entertaining encounter and Watford pulled one back after a calamitous pass from Sokratis allowed Tom Cleverley a chance that he buried with aplomb.

David Luiz then conceded a penalty nine minutes from time that substitute Roberto Pereyra confidently converted, giving the Hornets a deserved point in a game where they had 31 shots at goal.

That second-half performance, though

Watford started brightly and Gerard Deulofeu tested Bernd Leno with a shot from the edge of the box inside the opening six minutes, while Cleverley's thunderous rising drive forced the Arsenal goalkeeper into an acrobatic fingertip stop.

Sanchez Flores saw his new charges starve Arsenal of possession until Hughes was dispossessed by Dani Ceballos after 21 minutes and the referee ignored the hosts' pleas for a free-kick as Sead Kolasinac swept the ball forward to Aubameyang, who turned sharply and buried an instinctive strike into the net.

Having found a way through Watford's defence, Arsenal probed for more openings and Ozil carved one out with trademark composure when his incisive pass set Ainsley Maitland-Niles up to deliver a low cross to the far post that Aubameyang tapped home.

As they did in the first half, Watford flew out of the blocks in the second and clawed a goal back when Sokratis fluffed a clearance into the path of Deulofeu, who teed Cleverley up for a rasping finish low into Leno's net.

The Hornets continued to heap pressure on, substitute Pereyra and Deulofeu firing narrowly wide as Watford played with a belief that belied their lowly league position.

David Luiz's clumsy challenge on Pereyra sent the Argentine tumbling as he hurtled into the box and he dusted himself down before rolling the spot-kick in.

Deulofeu had the chance to win it when his angled drive from 12 yards flew narrowly past the target and Abdoulaye Doucoure missed an excellent opportunity in the dying seconds, but the final whistle nevertheless drew cheers from the home supporters after their side sealed a precious point.

What does it mean? Sanchez Flores has reasons to be cheerful

Watford's new boss witnessed his forwards put on an excellent display as they pegged back one of the division's top teams but his efforts – much like those of Emery – will centre on cutting out defensive lapses.

Deulofeu was a constant thorn in Arsenal's side, popping up in dangerous areas throughout the game and making a key intervention to set up Cleverley's goal.

David Luiz has given away two penalties in four Premier League appearances for the Gunners and unless he addresses his clumsiness his place in the side will surely be under threat.

- This was the first time in 22 meetings across all competitions that Watford and Arsenal have drawn a match against one another, having last done so in December 1984 (1-1).
- New Watford manager Quique Sanchez Flores has only lost one of his eight managerial meetings with Arsenal's Unai Emery in all competitions (W3 D4 L1).
- This was the first time that Arsenal failed to win a Premier League match in which they were at least two goals ahead since April 2016 when they drew 3-3 with West Ham, and the first time Watford avoided defeat in the league after being at least two goals behind since January 2018 versus Southampton (2-2).
- Since his Premier League debut in February 2018, Arsenal forward Pierre-Emerick Aubameyang has been directly involved in 46 goals in the competition (37 goals, 9 assists); only Mohamed Salah (53) has had a hand in more in this time.
- Aubameyang has been directly involved in five goals in his four Premier League appearances against Watford, scoring four times and assisting once.

Arsenal travel to Germany for a Europa League clash with Eintracht Frankfurt on Thursday, while Watford's next fixture sees them up against champions Manchester City in the Premier League on Saturday.