Hardik Patel on his part said the 50 per cent reservation cap set by the apex court, was just a "suggestion". 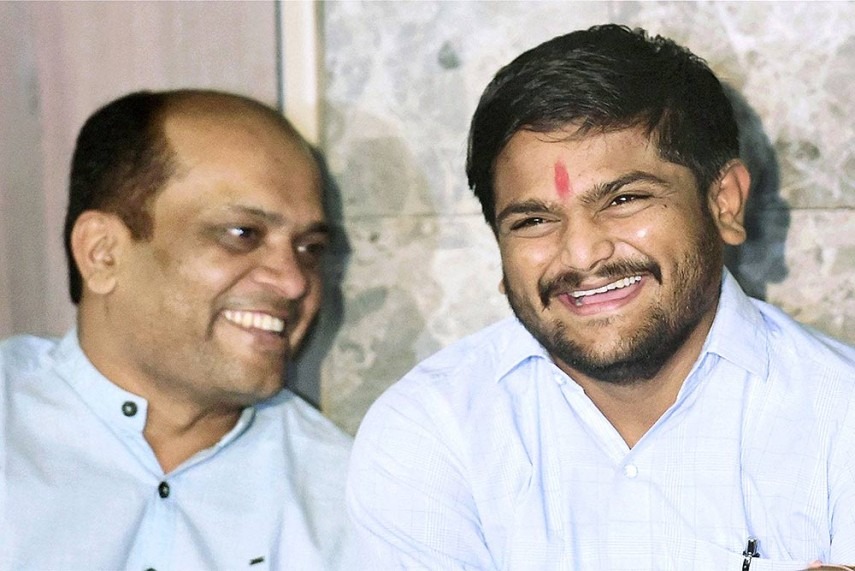 Legal experts today said the quota promised by the Congress to Hardik Patel for his Patidar community in poll-bound Gujarat may not pass judicial muster due to the 50 per cent cap even as the BJP dubbed the deal as a "big joke" and "mutual deception".

As quota politics came to the fore ahead of next month's Assembly polls, the legal experts also said the promised reservation by the Congress if it comes to power can survive if the Supreme Court was to reconsider its 1992 landmark judgement fixing the ceiling.

The Supreme Court in its verdict in the Mandal Commission case had ruled that the total reservation for SC/ST and other backward classes or special categories should not exceed 50 per cent.

Congress spokesperson Abhishek Manu Singhvi said the party will take steps on the promised quota within the "Constitutional daayra (framework)."

Hardik Patel, who is the leader of the Patidar Anamat Andolan Samiti (PAAS), on his part said the 50 per cent reservation cap set by the apex court, was just a "suggestion". He claimed the reservation formula given by the Congress for his community will be over and above the 50 per cent quota for the SC, ST and OBCs.

Hardik said if the Congress comes to power, it will conduct a proper survey for providing reservation. The party will bring a Bill in the state Assembly and give reservation, he said.

"That 1992 judgement was not just a suggestion, it was a law laid down by the SC. We cannot cross that limit. Even if the survey about the backwardness of any community is conducted, the eligible community has to be included in the existing 50 per cent quota. There is no scope of additional quota," said senior Gujarat High Court lawyer Girish Patel.

In the opinion of another advocate Krishnakant Vakharia, reservation can go beyond 50 per cent only if the Parliament amends the Constitution, or someone files an appeal in the Supreme Court against the 1992 judgement.

"We all abide by the interpretation of the Constitution done by the SC. In the the historical 1992 judgement, the SC interpreted the Constitution and said that 50 per cent cap is necessary to protect the principle of Right to Equality," Vakharia said, adding, "If that limit is not there, that principle becomes meaningless."

Vakharia said there are two possible ways to increase the cap.

"Either the Lok Sabha or Rajya Sabha amends the Constitution with two-third majority under Article 368, or someone files a petition urging the SC to reverse the 1992 judgement by claiming that social fabric has changed a lot since the judgement was delivered 25 years ago," he added.

Finance Minister Arun Jaitley said the "Congress-Hardik club" is one of mutual deception. "The law of the land is very clear and that is laid down by the Supreme Court and only last week in the Rajasthan case it has been re-affirmed that the 50 per cent cap cannot be increased."

"So let them contnue to deceive each other and deceive the public by saying that they will devise a methodology to breach the gap," he told reporters in Delhi. "Legally and constitutionally that is not possible as the law stands today."

Hitting out at Hardik Patel for declaring support to Congress, Gujarat Deputy Chief Minister Nitin Patel said the formula of reservation above the cap set by Supreme Court was something "offered by fools and also accepted by fools."

"Though it is very much clear that reservation quota cannot go beyond 50 per cent in any situation, Hardik is trying to misguide the Patidar community with the formula offered by the Congress. In my opinion, this formula of reservation is a big joke," Patel told reporters in Ahmedabad.

Nitin Patel claimed that Congress leaders like Kapil Sibal have made a fool out of Hardik by offering such formula.

"If you want to see who has fooled whom, you go and see it in Rajasthan. The BJP is a ruling party there. It fools people everyday. Sometimes they talk about Jat reservation, sometimes Gujjar reservation. They are in power, they can fulfil the promise, yet they don't," he told reporters in Delhi.

"We are not in power, when we will come in power there, we will implement it staying completely within Constitutional framework. We have that capabilities to do that."

Senior advocate Aman Lekhi said the quota promise was "pure power politics" where the primary aim is to grab power and the social welfare purpose behind reservation gets lost.