Priyanka Gandhi Vadra Has Pitted Herself Against Yogi Adityanath; She Needs To Stay The Course

If Priyanka Gandhi Vadra wants the Congress to emerge as a strong political force in Uttar Pradesh by the 2022 assembly polls, she will need to prove that her current aggression isn’t an ephemeral response to prevailing public anger. 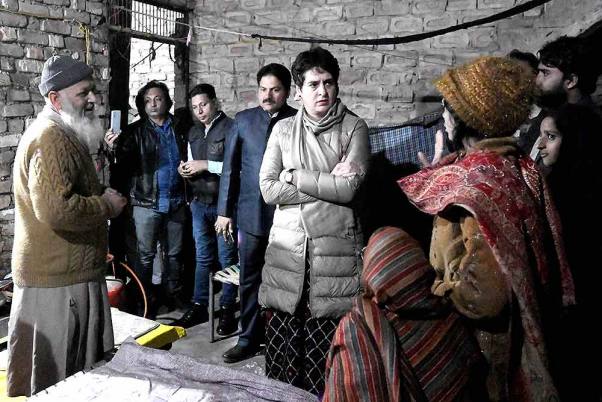 For years, a deferentially unanimous refrain within the Congress party, at times even at the risk of undermining the leadership of Sonia Gandhi and Rahul Gandhi, has been that Priyanka Gandhi Vadra is the only panacea for the Grand Old Party’s continuing state of drift. The party’s ‘brahmastra’ – an unyielding weapon in Hindu mythology that never misses its mark but can only be used once – is how many Congressmen would define Priyanka; sometimes as an excuse for the delay in her joining active politics, at others as a flatteringly premature tribute to her leadership skills.

The party finally decided to use the ‘brahmastra’ in the run up to the 2019 Lok Sabha polls when Rahul Gandhi, the then Congress president, drafted her younger sibling into the party as general secretary in-charge of party affairs in eastern Uttar Pradesh. However, the Congress’s debacle in the Lok Sabha polls – coupled with Rahul’s humiliating defeat in Amethi – effectively proved that the so-called brahmastra was possibly nothing more than a country-made pistol which misfired just when it couldn’t afford to do so.

Politics, though, is a profession that affords its careerists multiple chances to redeem their failures. The anti-CAA/NRC protests that have kept the country on edge for these past few weeks and the BJP’s obstinate refusal to acknowledge the perils of its evidently flawed decision have given Priyanka a second chance to prove that politics is, indeed, her true métier. Whether she’s second time lucky will, however, depend on Priyanka’s ability to stay the course and shed the taint of transient combativeness that has been the hallmark of her elder sibling’s political foray thus far.

Rahul’s decision to step down as Congress president after the Lok Sabha polls had triggered a slew of resignations by his confidantes who he had handpicked for various roles. Priyanka did not put in her papers. Instead, she asserted that she would focus on the main task that her brother had bestowed upon her, which was to make the Congress battle-ready for the assembly polls due in UP in early 2022.

Priyanka’s political maneuvers over the past six months and more so after the anti-CAA stir intensified in UP a fortnight ago, have shown a resolve to overcome the embarrassment of the Lok Sabha debacle. Rahul, despite the presently buzzing rumours of his possible return as Congress chief within two months, seems content with leading his anti-RSS/BJP crusade on Twitter – unless a Congress event like the party’s foundation day or a Bharat Bachao rally gives him a ready platform for the purpose. Priyanka, it would appear, prefers to be seen with the people she hopes to lead, and the effort seems to be yielding desired results for now.

Her altercation with the UP police when she defied the State and her own security protocol to walk eight kilometers to meet the family of former IPS officer S.R. Darapuri, arrested for participating in the anti-CAA protests, and her determined solidarity with other arrested protesters, including Sadaf Jafar, has pitched Priyanka directly against UP chief minister Yogi Adityanath. In public meetings and media interactions and on Twitter, Priyanka has kept the UP government her primary target while attacking the BJP’s highhandedness against the protesters. Adityanath, on his part, has obtusely responded to the protests with his talk of “revenge” and by unleashing officials in the chief minister’s office to rebut Priyanka’s “Yogiji wears bhagwa (saffron)” remark. Earlier, the Adityanath government had stopped Priyanka and Rahul from meeting families of those anti-CAA protesters who had been killed in police firing in Meerut.

The fact that Priyanka is the only frontline political leader on UP’s streets in solidarity with the protesters also shows Mayawati’s Bahujan Samaj Party (BSP) and Akhilesh Yadav’s Samajwadi Party (SP) rather poorly. The SP and BSP have a much larger support base than the Congress in UP but with Priyanka leading the anti-CAA charge against the ruling BJP in the state, Mayawati and Akhilesh could end up alienating sympathizers, particularly their sizeable Muslim voters who stand to lose the most with the CAA.

The anti-CAA protests are largely fuelled by civil society activists and students, but the political ramifications of this continuing unrest cannot be dismissed. While Prime Minister Narendra Modi and Home Minister Amit Shah may hope that the electoral price that the BJP may have to pay for these protests will diminish considerably by the 2024 general election but for Adityanath, the challenge of retaining power will come much sooner with the UP assembly polls due in February 2022.

Priyanka is clearly preparing herself for this challenge which lies in less than 14 months from now. Congress sources say the anti-CAA protests have given Priyanka an opportunity to tap into public anger that has been building against the BJP in UP from two formidable quarters – first, the sizeable Muslim electorate and second, the more amorphous vote bank of youth voters and civil society members who have been at the vanguard of this unrest.

While Priyanka speaks against the CAA, she simultaneously makes references to the economic crisis affecting the lower and middle classes, growing joblessness affecting the youth and the atrocities on Muslims, Dalits and other oppressed communities. “In UP, the Congress had lost the confidence of Muslims, and Dalits in the post-Mandal and post-Babri Masjid era as these communities shifted loyalties to the BSP and SP. The middle classes and youth had emerged as a strong BJP vote bank in recent years. Now each of these blocs is unhappy and Priyanka wants to prove to them that the Congress stands for their rights,” a Congress leader told Outlook.

Another party veteran who worked closely with Rahul Gandhi during the 2012 UP polls told Outlook, “The biggest hurdle for the party’s revival in UP was that after 1989, we consistently lost ground in the state till a point when we had no workers left in a majority of the districts… since the Nehru-Gandhi family never bothered with dabbling in state politics and our local leaders had no mass base, the erosion continued.” With Priyanka now concentrating on UP, the party hopes that its seriousness in reviving the organisation in the state will be less difficult to prove to the voter.

However, others in the party caution that Priyanka “must not give up the fight if the anti-CAA protests begin to wane.” A former Lok Sabha MP who worked closely with Rahul and is now among Priyanka’s confidantes pointed out that the impression that Nehru-Gandhi siblings are “non-serious about reviving the party in UP” has gained ground because of the staccato manner in which the duo pick issues and abandon them.

“Rahul did it with the Bhatta-Parsaul land agitation in 2015 before disappearing from the state. In July this year, Priyanka marched to Sonbhadra to meet families of those killed in brutal caste violence. The Yogi government put her under house arrest, which generated a lot of goodwill for her but then she got busy with revamping the party’s district units. If Priyanka had continued her public outreach aggressively, we would have done better in the 12 assembly bypolls that took place two months back, but we forfeited our deposits in most of those seats,” the former MP said.

If Priyanka wants the Congress to emerge as a strong political force in the state by the 2022 assembly polls, she will need to prove that her current aggression isn’t an ephemeral response to prevailing public anger. With Akhilesh and Mayawati largely absent from the ground, Priyanka has the first-mover advantage against the BJP and Adityanath for now, but this may not be the case a few months on. She would need a strategy that helps her stay the course for the next 14 months at least. Congress sources say Priyanka is likely to tour UP for at least 15 days each month from now on to galvanise support for her party. A wise move but she should possibly consider upping the stakes a bit more – perhaps by positioning herself as the Congress’s chief ministerial face in 2022. After all, no Nehru-Gandhi has ever bothered getting into state politics and doing so would be an unambiguous expression of the Congress’s intent on revival in the country’s most important political state.

Also Read | Congress At 135: A Wishlist For Change For The Grand Old Party