'My security is too small an issue to be concerned about when there is lawlessness, unemployment and violence in Uttar Pradesh,' Priyanka Gandhi Vadra said. 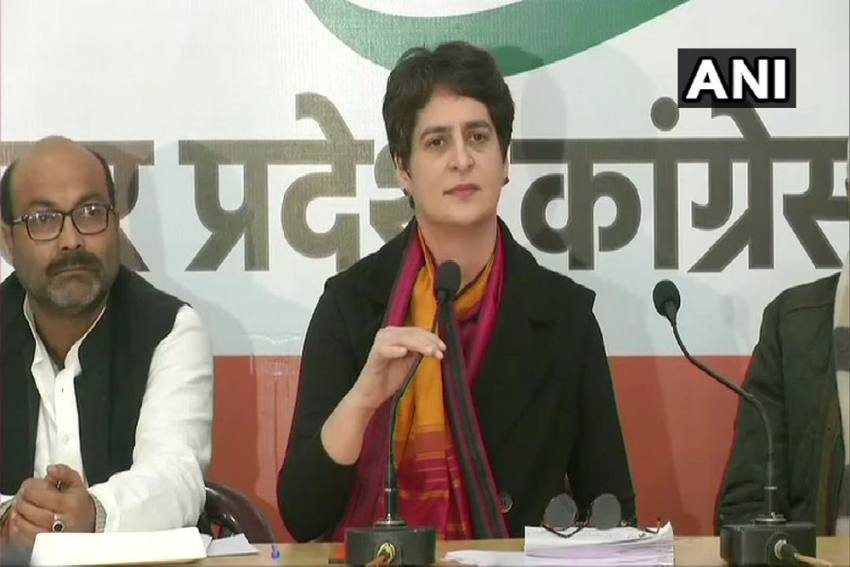 There is no place for violence and revenge in India's soul, Priyanka Gandhi, Congress General Secretary in-charge of UP, said on Monday afternoon, in a direct attack on chief minister Yogi Adityanath, who had vowed to avenge the loss caused during the anti-Citizenship law protests in the state.

Addressing a press conference after the grand old party submitted a memorandum demanding a judicial enquiry into the "unlawful conduct" of UP police during the anti-CAA protests, Priyanka said: "Several steps taken by state administration and police were illegal, leading to anarchy."

She repeatedly brushed aside questions on her security, two days after she was stopped by UP police from meeting the family of a retired IAS officer who had been arrested following the agitation against the newly amended citizenship law and National Register of Citizens (NRC).

"My security is too small an issue to be concerned about when there is lawlessness, unemployment and violence in Uttar Pradesh," she said.

"We are here to speak about the state of security in UP and its people."

When asked about the ongoing nationwide CAA agitation, Priyanka asked: "Will you ask for papers from the poor, from people who go to cities as labourers? Where will they bring, say, a telephone bill from the 1970s."

"I went to the house in Bijnor where two students died. One of them was shot outside his home ... In the evening, the police threatened them not to take any legal action ... According to media and official reports, 5,500 people were detained and 1,100 were arrested. Unofficially, the number is higher," she said.