We Politicians Are Not Enemies, Politics Should Not Become ‘India Vs Pakistan’ Situation: Sukhbir Badal

Shiromani Akali Dal president, Sukhbir Badal expressed his concerns on personal attacks against leaders, and the quality of leaders in the ongoing Lok Sabha election, now in its last lap. 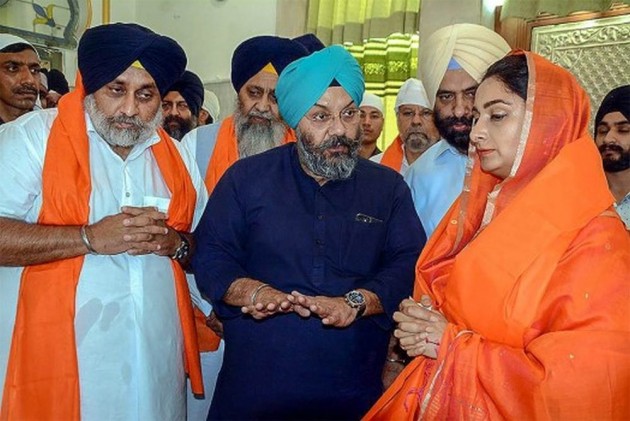 The chief of one of BJP's oldest allies hailed Prime Minister Narendra Modi as a decisive and strong prime minister, and said he is the only choice to steer the NDA after the Lok Sabha election results.

“We need a strong prime minister...after so many years we got a prime minister who is decisive. You can’t let the country run on auto mode...we need a leader who can take the country on the path of faster growth,” Badal told PTI in an interview.

He also articulated his concerns about personal attacks against leaders and the quality of leaders in the ongoing Lok Sabha election, now in its last lap.

"We politicians are not enemies...we are not like India-Pakistan...politics should not be like India versus Pakistan, which it is unfortunately becoming,” he said.

Everyone has their own views, but still, we are all Indians and the interest of the country is important for us, Badal said.

"There may be a platform where we may have to be together against a common enemy,” he added.

Asked if the NDA might need new partners after the results and demand a change of leadership, he said, "People are voting for him (Modi) and he is the right person to lead the country. I think we should stick with him post results. He is the only choice.”

Asked whether the NDA would otherwise be ready to sit in opposition, Badal nodded and said, “Yeah, yeah.”

Discussing the situation in Punjab, Badal said the biggest issue in the state is non-performance of the Congess government, led by Captain Amarinder Singh, which has “failed on all fronts”.

The SAD is contesting 10 of Punjab's 13 Lok Sabha seats and the BJP three.

“Amarinder Singh is the most incompetent chief minister in the country. In Punjab, there is very strong sentiment against the chief minister. He doesn’t travel through the state,” the SAD chief said.

Taking on the Gandhi family, he described them as a liability for the Congress in the state "in terms of sentiments”.

He also referred to Operation Bluestar, the Army operation to flush out militants in 1984 when Indira Gandhi was prime minister, and the anti-Sikh riots that followed her assassination.

"The biggest sacrilege was done by Congress, they attacked Golden Temple. There can’t be bigger sacrilege than this... it is also responsible for killing innocent Sikhs in 1984 in the national capital,” he said.

When asked about AAP’s prospects in Punjab, Badal said the people have discarded the party, and it no longer has any relevance in the state.

“It is typical Punjabi nature to try something new. Once they found it is of no benefit or of new use they discard it... the same is the case with AAP in Punjab,” he said.

He said his priority will always be his state.

“I am contesting elections as party workers in Ferozepur demanded a candidate from the family. But my focus will be Punjab,” said the son of party stalwart, Parkash Singh Badal.

Confident of SAD-BJP alliance’s better performance than 2014, when it won six of 13 Lok Sabha seats in the state, Sukhbir Badal said that the developmental work done by the alliance government in the state and the leadership of Modi at the centre, will be the biggest strength of the two parties in this general election.