'Response To Coronavirus Was Pre-emptive': Govt Brushes Aside Criticism Over Lockdown

The Centre has come in for criticism that the lockdown was announced without planning and also for the fact that migrant labourers are stranded across the country without any resources. 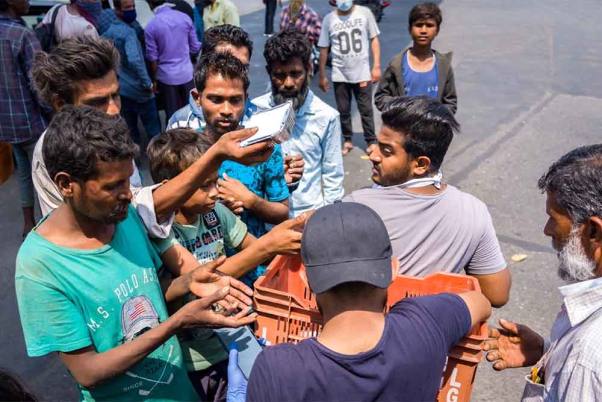 Volunteers distributes food packets to homeless and daily wagers outside Bandra railway station, during the nationwide lockdown imposed in the wake of coronavirus pandemic, in Mumbai.
Photo by Apoorva Salkade/OUTLOOK
PTI March 28, 2020 00:00 IST 'Response To Coronavirus Was Pre-emptive': Govt Brushes Aside Criticism Over Lockdown

India's response to COVID-19 has been "pre-emptive, pro-active and graded", the government said on Saturday, brushing aside the allegation that the 21-day nationwide lockdown was announced without any planning.

The Information and Broadcasting Ministry, in a statement, said the government had already put in place a "comprehensive response system" at the borders of the country, much before the World Health Organisation (WHO) declared the coronavirus as a public health emergency of international concern on January 30.

The government has come in for criticism that the lockdown was announced without planning and also for the fact that migrant labourers are stranded across the country without any resources.

The government said screening of incoming air passengers, followed by suspension of visas and a ban on international flights were done much ahead of any other country.

"Thermal screening of incoming international passengers from China and Hong Kong was started on 18th January, much before the first case of coronavirus was detected in India on 30th January.

"India's response to COVID-19 has been pre-emptive, pro-active and graded," the statement said.

Citing the examples of Italy and Spain, which started screening travellers 25 days and 39 days respectively after the first reported cases, the statement said the government took a number of proactive measures and shared the chronology of the steps taken by it.

It also refuted the allegation that "prosperous Indians" were allowed to return without screening, terming it "preposterous".

"The government took swift action to put in a place a comprehensive and robust system of screening, quarantine and surveillance as part of its robust response to the public health crisis right from the beginning.

"This covered every traveler, Indians returning after business or tourism, students as well as foreigners," the statement said.

Passengers were screened at 30 airports, 12 major and 65 minor ports and at land borders, the government said, adding that over 36 lakh passengers were subjected to screening.

It also said that the states were regularly requested to maintain and further improve upon the surveillance system so that the coverage was complete and there were no gaps.

"A meticulous system has enabled the states to track down individuals who tried to avoid surveillance or who did not follow quarantine measures," the government said.

"Integrated disease surveillance system, which includes monitoring of international travelers, is one of the many issues discussed in these video-conferences," the statement said.

The number of COVID-19 cases climbed to 873 in India on Saturday with the death toll rising to 19, according to the Union Health Ministry.

Coronavirus: MHA Orders State Disaster Funds To Be Used To Give Food, Shelter For Migrant Workers