Rahul Gandhi's attack on the Modi government on national security comes amid an escalating war of words between the BJP and the Congress over India's air strikes on terror camps in Pakistan and the Pulwama terror attack. 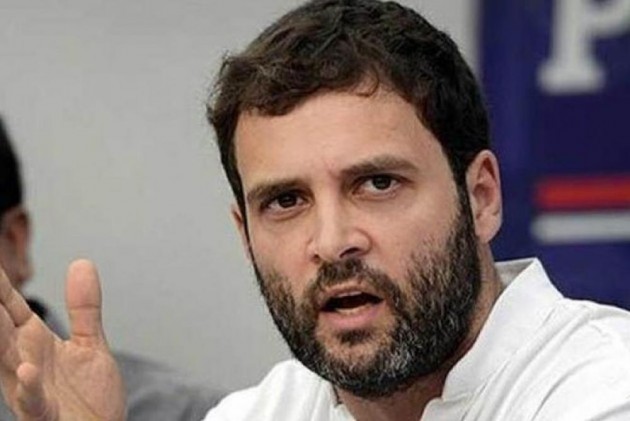 Congress chief Rahul Gandhi on Saturday stepped up his attack on the Modi government over Pulwama terror strike and asked the prime minister to explain to the nation why the then NDA dispensation had released terror outfit JeM chief Masood Azhar from Indian jail.

Raking up the release of Azhar by the Vajpayee dispensation in 1999 in exchange for passengers of a hijacked Indian Airlines plane, he said Modi should tell the country "how Masood Azhar was sent back (to Pakistan), who sent and which government sent him (back)".

He also asserted that the Congress would not bow down to terror.

Gandhi's attack on the Modi government on national security comes amid an escalating war of words between the BJP and the Congress over India's air strikes on terror camps in Pakistan after a suicide bomber attack on a CRPF convoy killed 40 jawans in Pulwama in Jammu and Kashmir, with each accusing the other of politicising the issue.

In a fierce attack on the opposition, Modi had called them "poster boys of Pakistan" for seeking proof of the IAF's action on a terror camp in Balakot in Pakistan and asked them to stop appeasing Pakistan.

"Some days ago CRPF people were killed in Pulwama. I have a small question to the prime minister. Who killed these CRPF jawans? What is the name of the chief of Jaish-e-Mohammed?...Masood Azhar," Gandhi said at a rally here in north Karnataka, where he sounded the party's bugle for the Lok Sabha polls.

"Didn't you send (then Union minister) Jaswant Singh and your National Security Advisor (Ajit Doval) on the same flight? Did you forget that your (party's) government sent this person from India's jail to Kandahar(in Afghanistan)?"

"Why are you not speaking about it in your speeches? Why are you not saying that the person who carried out the bomb blast on CRPF, who killed CRPF jawans was sent back to Pakistan by the BJP government?" Gandhi asked.

He told the crowd, "Go to the internet, you can see the photo of Ajit Doval who is the National Security Advisor of Narendra Modi along with Masood Azhar at Kandahar airport."

"Modi ji we are not like you, we won't bow in front of terrorism," he said.

Azhar was released by the Vajpayee government in exchange for passengers of the hijacked Indian Airlines plane IC-814 in 1999.

The Kathmandu-New Delhi plane was hijacked and taken to Kandahar by Masood Azhar's men.

The JeM chief was freed along with Omar Sheikh and Mushtaq Ahmed Zargar alias 'Latram' after negotiations with hijackers, in which Doval was involved, failed.

The then external affairs minister Jaswant Singh took the three terrorists to Kandahar in a special plane to ensure the release of passengers of the hijacked plane.

On the Rafale fighter jet issue, Gandhi asked Modi to explain "why he gave Rs 30,000 crore to Anil Ambani. You make make understand why did you purchase Rs 526 crore aircraft at Rs 1,600 crore."

"You also tell the pilots of Air force that by robbing from their pockets you have given it to Anil Ambani," he said.

Gandhi said Modi had asked the people to make him "a chowkidar" and spoken about 56-inch chest and people voted for him.

But on the Rafale issue "Narendra Modi himself through theft has put Rs 30,000 crore to Anil Ambani's pocket," he alleged.

Gandhi said Modi claims he wants to do 'chowkidari', but "doesn't do your (people's) chowkidaari, he does Anil Ambani's chowkidaari."

The Congress president also said Modi was "swinging" with the Chinese president when their army had infiltrated into Doklam.

"Even today China's army is sitting in Doklam. The whole world knows about it," he claimed.

He said if the Congress government comes to power in the 2019 Lok Sabha polls, it would immediately give minimum income guarantee to the country's poor.

Gandhi said the Congress would also reform the GST and bring in "one tax GST".

Promising to implement women's reservation bill which provides for reservation of parliamentary and assembly seats for women, the Congress President said in 2019 "our first work will be providing reservation to women".

Gandhi said the ruling coalition alliance in Karnataka --the Congress and the JD(S) -- would support each other in the Lok Sabha elections and "together we will win election here".