The three parties are signatories to a poll boycott announced for the upcoming Ladakh Autonomous Hill Development Council (LAHDC) elections. 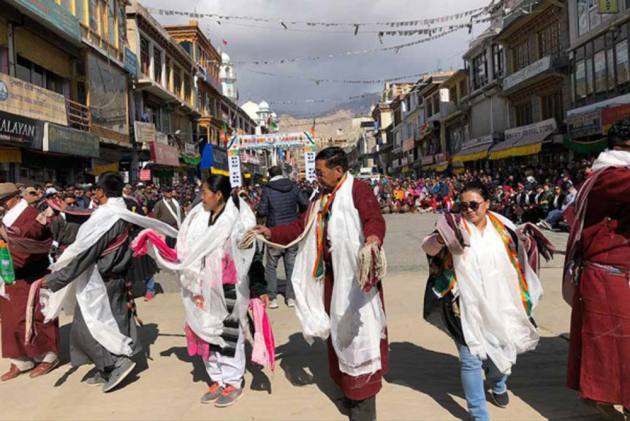 People’s Movement for Sixth Schedule for Ladakh, an amalgam of different political parties and socio-religious organizations, has announced its decision to boycott the forthcoming polls held by the Ladakh Autonomous Hill Development Council (LAHDC).
The group said that it would boycott the polls until the constitutional safeguard under sixth schedule on the lines of Bodo Territorial Council is extended to Ladakh. Interestingly, the BJP is also a signatory to the poll boycott statement issued by the organisation today.

The Sixth Schedule of the Constitution makes separate arrangements for tribal areas. Fearing settlements by outsiders in Ladakh after the abrogation of Article 370 and Article 35A on August 5 last year, people in the region are seeking tribal status to preserve the existing demography of the region. The People’s Movement for Sixth Schedule for Ladakh was formed to press for this demand.

The statement issued today, has signatures of 12 members of the committee who belong to different parties and socio-religious groups including the Congress, BJP, Ladakh Buddhist Association, All Ladakh Gonpa Association, Anjuman-e-Moin-ul-Islam, Aam Adami Party and others. On September 3, BJP led LAHDC in Leh passed a resolution, seeking safeguards under Article 371 of the Constitution, the Sixth Schedule and the domicile law, to protect the tribal rights of the indigenous people of Ladakh.

The LAHDC election is scheduled to be held on October 16. In the 30-member LAHDC body, 26 members are elected while four are nominated, with no voting rights. Earlier, representatives of opposition parties—Congress, AAP, and BSP—had asked for the postponement of the elections citing escalating border tensions and the spread of Covid-19 in the region.

LHDC Leh, was constituted in accordance with the Ladakh Autonomous Hill Development Council Act of 1995 during P V Narasimha Rao's government, and its first election was held in 1995. Later, during Mufti Mohammad Sayeed led PDP rule in 2003, a similar council was established for Kargil district.