More from Vinayak Bhat
View All

The Chinese Dream 中国梦 has been taking shape since the turn of the century. Keeping in tune with country’s national objectives, the Chinese Navy called PLA Navy or PLAN has been modernising to make itself true blue water navy. China has been sending its hospital ship ‘Peace Ark’ #866 and training ship ‘Zhenghe’ #81 on world tours for a long time. Since the last decade Chinese PLAN anti-piracy flotillas have been making forays into Gulf of Aden, Red Sea and beyond to Europe. The experiences of these longish missions the PLAN personnel felt the need for replenishment of ships and recoupment of its personnel.

China started consultations with Djibouti in early 2015, which fructified into a long-term deal (50 year lease?) of about 200 acres of land for a so called logistical support base. The work started in March 2017 along with the construction of Doraleh Multi-purpose Port being constructed by China State Construction Engineering Corporation (CSCEC). 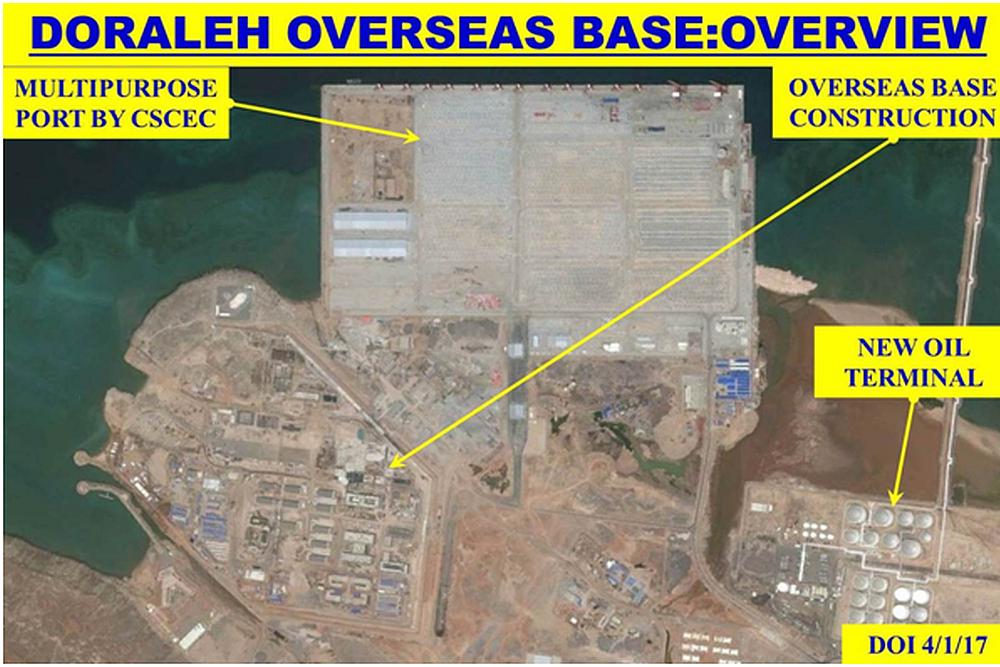 The Chinese base is claimed to be a simple logistical support base providing replenishment to anti-piracy escort ships and temporary rest to its personnel. But it actually seems to be a base supporting 联合先遣组值 or Joint Forward Group as per the writings on a picture purported to be of the base, leaked on Chinese internet.

The picture clearly shows PLA army and PLA navy personnel standing in uniform suggesting joint formation at the base. 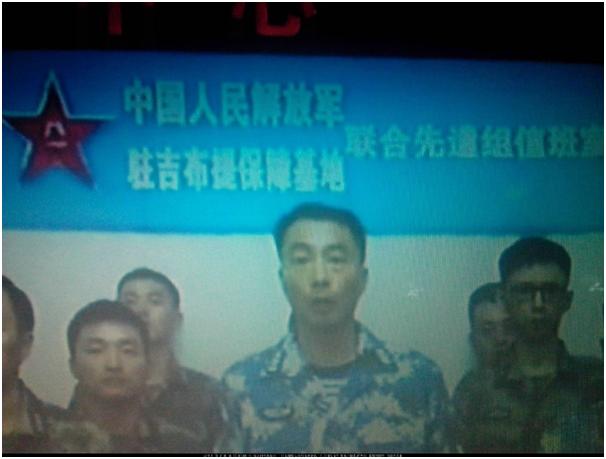 The satellite imageries of April 01, 2017 and August 23, 2016 clearly show a massive fortress being constructed by China.

Recently, a Chinese defence adviser explicitly called the navy installation a “military base”, a striking departure from Beijing’s past descriptions of the project as a “support facility”.

Professor Jin Yinan, a retired major general and former director of the strategic research institute at the PLA’s National Defence University, told an open forum in Hong Kong this week: “We said in the past that we would never build an overseas base but now we build one. Why?“ Jin said. “Will China copy the US to seek hegemony in the world? No. We have to protect the Chinese maritime interest faraway.”

The base under construction has at least 15-18 storage barracks, a likely office complex and a UAV/heliport. The base also has large area under construction which looks like a huge underground air conditioning (AC) plant. The large ‘B’ shaped five storied building is possibly a residential building. The size of 95m x 33m will provide space enough for more than brigade strength of troops. The office complex will also have much expected hospital and gymnasium. The UAV/heliport area has a 50m x 35m hangar and large apron type hard standing coming up. The other buildings would also have repair facilities and motor transport garages. 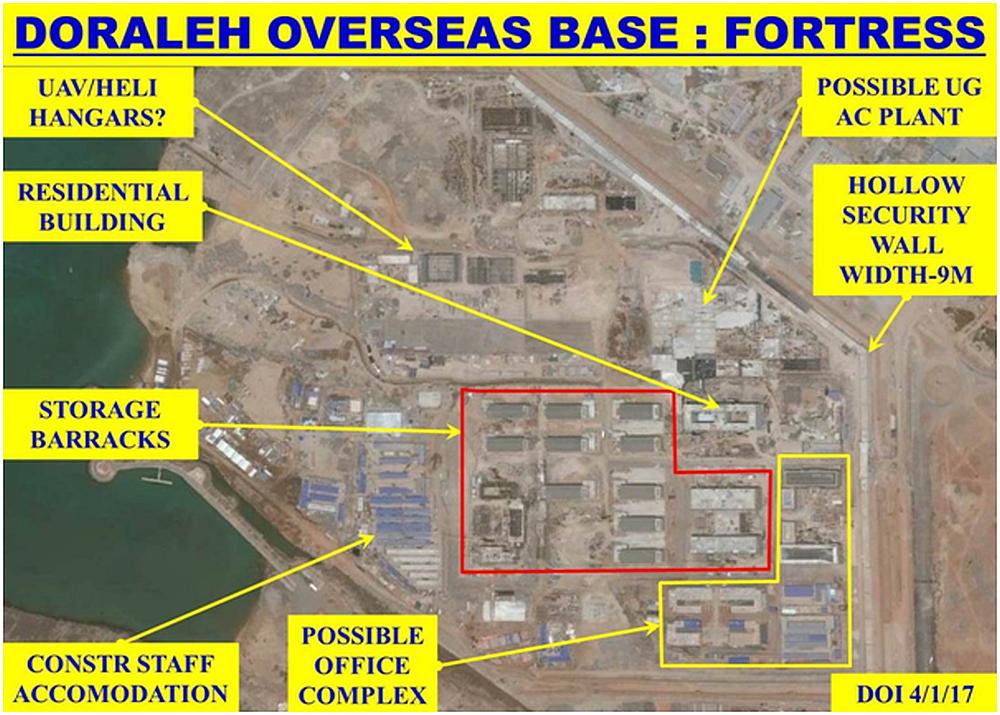 The 10 barracks of 16m x 45m have very distinct AC exhausts fans on both sides of the barracks indicating these are refrigerated cold storages. There are huge 9m wide pipelines underground connecting these barracks with the AC plant. The open vents near every barrack would probably contain refrigeration controls. 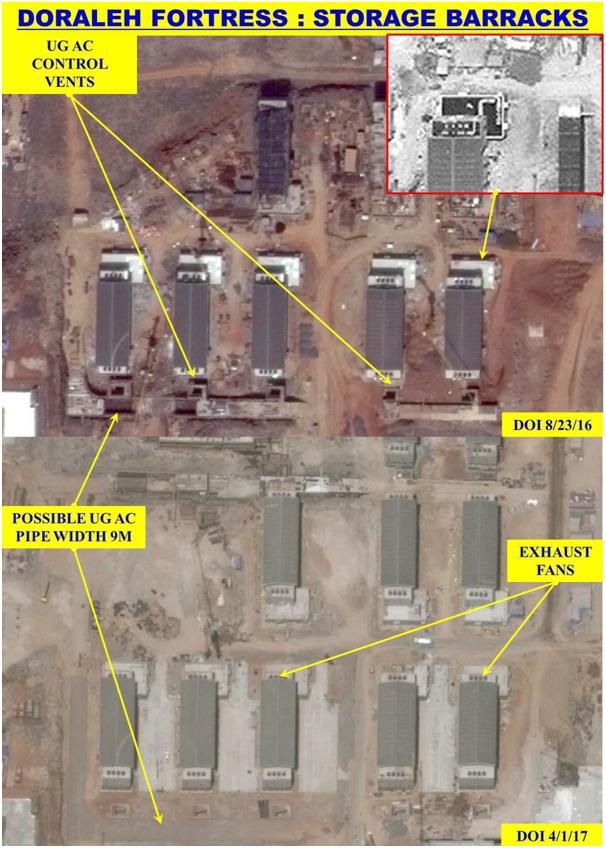 The base has a security wall being constructed all around. The perimeter wall length of 2775m surprisingly seems to be hollow with a huge width of 9m. Security walls of such huge width have not been observed after World War II vintage Maginot Line. The corner points are 2m wider than the wall indicating probable guard posts. The wall has slightly raised platforms every 25m. It is likely that some kind of weapon emplacements would soon be seen on top of these guard posts. 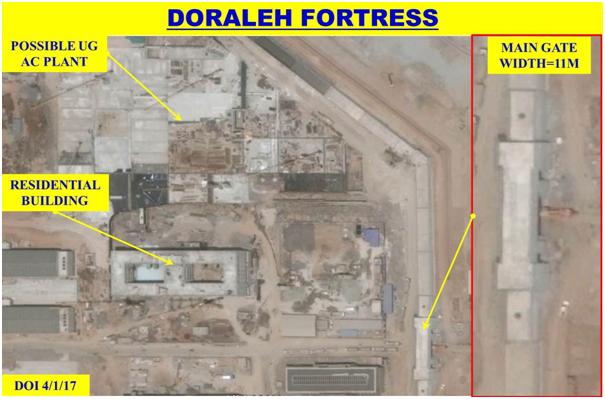 This new Chinese fortress would be able to monitor all shipping through Red Sea and Gulf of Aden. The base will not only provide supplies to Chinese ships but also greatly enhance China’s power projection capability much beyond its borders. China is likely to use this base as a regional deterrence capable of exerting political and military influence in the region.

China has been providing loans to Djibouti mainly for construction of a railway line from Djibouti to Ethiopia. The loans as usual will turn into debt traps to leverage China to upgrade the base in future.

This is being seen as a challenge to the US Camp Lemonnier, the UAV base nearby and the US domination in the region.

China has been planning to construct a similar base in Gwadar in Balochistan under the garb of ‘One Belt One Road’ and China Pakistan Economic Corridor (CPEC). India should be wary of any such move in its neighbourhood so close to its borders. India needs to ensure the CPEC is not permitted to pass through its areas under Pakistani occupation.

(Colonel Vinayak Bhat is a military intelligence veteran of the Indian Army. He specialises in satellite imagery interpretation and analysis. He tweets @rajfortyseven)