To Defeat 'Mahachor', We May Have To Support 'Chor', Says Hardik Patel Amid Tie-Up Rumours With Congress 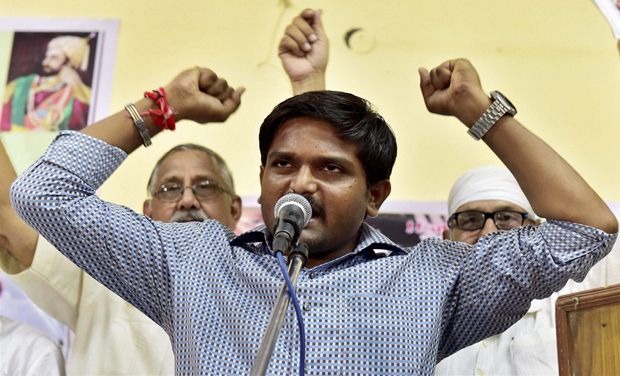 Amid speculations that Patidar leader Hardik Patel held meeting with Congress vice president Rahul Gandhi in Ahmedabad, Patel, while addressing a late night rally on Monday, said he would not shy away from supporting "chor (thief)" Congress to defeat "mahachor (big thief)" for the upcoming Gujarat elections.

Patel, while accepting that he was present in Hotel Ummed at the same time with Gandhi, denied all reports of a meet. He, however, said to have met the party's state-in-charge Ashok Gehlot, reported Hindustan Times.

Making stinging remarks against the saffron party, Patel said that BJP thinks that "everything in Gujarat is their property."

"After the Congress’s invite, I reached the hotel on Sunday at 3am. I met their Gujarat in-charge. As it was too late, I decided to stay back at the hotel … But they (Bharatiya Janata Party) got the CCTV camera clips leaked because everything here (in Gujarat) is their (BJP) property," he said at the rally.

The local news channels almost ran on a loop, the CCTV footage of Patel entering the hotel late at night.

The 24-year-old Patidar agitation leader asked his community members to have pateince in lending the support to the "chor" party (Congress). "Congress is a chor but the BJP is a mahachor. And to defeat a mahachor, if we have to support a chor, we will. But have patience. Do not support (Congress) just now,' he was quoted as saying by the paper.

In view of the ongoing Patel and OBC agitations in the poll-bound state of Gujarat, almost 11 seats are affected and hold a shaky ground for the BJP. These 11 seats also include five Assembly seats of Bapunagar, Lathi, Chhota Udepur, Padra and Karjan which the BJP won with a margin of less than 5,000 votes in the last elections.

The Congress in not leaving any stone unturned to make full use of the situation. Eyeing Patidar votes, the party is trying to get support from their leaders to counter the BJP, which is in power in Gujarat since 1995.

Congress had earlier invited the agitating leaders, who have been acting as a pressure group, to hold a meeting with party vice president Rahul Gandhi; hoping that Patel quota stir hero Hardik Patel, Dalit leader Jignesh Mewani and OBC leader Alpesh Thakor, might swing the poll battle in their favour.

Earlier, Hardik had turned down the Congress' invitation to fight the Gujarat Assembly election jointly, saying the polls were not a Bharatiya Janata Party (BJP)-Congress fight.