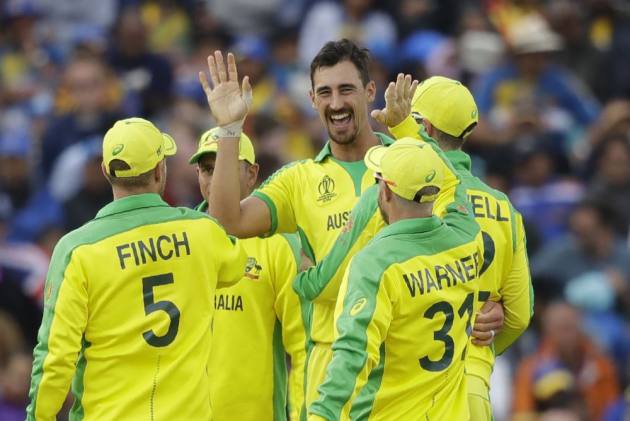 Australia beat Sri Lanka by 87 runs in a Cricket World Cup 2019 game at The Oval on Saturday. Asked to bat first, the defending champions rode on skipper Aaron Finch's 153, Steve Smith's 59-ball 73 and Glenn Maxwell's unbeaten 25-ball 46 to post 334/7 in their 50 overs. In reply, captain Dimuth Karunaratne and Kusal Perera got Sri Lanka off to a blistering start, putting on a 100-plus stand inside the first 15 overs. But their middle-order, comprising Kusal Mendis, Angelo Mathews and Thisara Perera, couldn't capitalise on it and Sri Lanka were bowled out for 247 in 45.5 overs. Karunaratne hit 97, while Mitchell Starc finished with 4/55. Get highlights of Australia vs Sri Lanka here (SCORECARD | POINTS TABLE | SCHEDULE & RESULTS) (SA vs AFG)

Aaron Finch, Player of the Match: "I was hitting some nice drives early, which is a good sign for my batting. It was a nice wicket. I'm working on trying to ensure my head doesn't fall over. We thought we could get 350 plus, but Sri Lanka executed superbly under pressure at the end. We thought we were a touch short with the new ball, Kusal and Dimuth were superb. You want to bowl top-of-off and when they kept hitting there, we had to change plans. It was nice for Maxwell to have a long boundary to bowl with, hard to get 10 overs out of him on flat wickets, but with a bit of real estate out here and the breeze against him, it helped to get overs out of him."

22:33 hrs IST: OUT! Cummins gets the final wicket. Australia win by 87 runs. Fourth victory in five matches for them as they move to the top of the points table.

21:49 hrs IST: OUT! Starc gets Siriwardana and Thisara Perera in the same over. Sri Lanka in all sorts of trouble now, need 118 off 78 with just four wickets in hand.

21:29 hrs IST: OUT! Just the wicket Australia would have wanted. Richardson gets the better of Karunaratne, who falls three short of a century. Easy catch for Maxwell at backward point. Massive blow to Sri Lanka. Angelo Mathews comes to the crease.

21:08 hrs IST: Get a feeling Australia should have gone with a spinner here. Maxwell has done well but you need someone who can take wickets in the middle overs. Surely, there will be some discussions between Langer and Finch regarding the same. Sri Lanka are 168/2 after 28 overs.

20:50 hrs IST: OUT! Short of length from Behrendorff, Thirimanne looks to cut but gets an outside edge and Carey does the rest behind the stumps. Kusal Mendis comes to the crease. Sri Lanka are 154/2 after 24 overs. Pat Cummins comes back into the attack.

20:42 hrs IST: Only six off the last two overs. Sri Lanka are 145/1 after 23 overs. Pressure building on them. They need a couple of big overs here. For Australia, the equation is simple. They need wickets.

20:28 hrs IST: Eleven off the last 18 balls. Sri Lanka are 131/1 after 19 overs. Karunaratne 73*, Thirimanne 4*. If Australia can somehow get rid of the Sri Lanka captain, it'll not be easy for the rest of batters to forge a partnership.

20:15 hrs IST: OUT! Full and straight from Starc, Perera misses and the ball crashes onto the middle-stump. Lahiru Thirimanne comes to the crease. Sri Lanka are 120/1 after 16 overs. Maxwell to continue.

20:00 hrs IST: FOUR! That's a half-century for Karunaratne. Short from Richardson and the Sri Lanka captain pulls over mid-wicket. What an innings! Can he get a hundred here? Sri Lanka are 98/0 after 12 overs.

19:53 hrs IST: Twenty-six off the last 12 deliveries. Sensational start from Sri Lanka. They are 87/0 after the end of first Powerplay. Karunaratne 44*, Perera 42*. Another change in bowling. Glenn Maxwell comes into the attack.

19:38 hrs IST: Successive boundaries from Karunaratne. Expensive over from Behrendorff, 13 off it. Sri Lanka are 53/0 after 7 overs. Kane Richardson comes into the attack.

19:34 hrs IST: FOUR! Cummins drops it short and Karunaratne pulls it through mid-wicket. Enters 20s. Sri Lanka are 40/0 after 6 overs.

19:26 hrs IST: Another solid over, this time from Cummins. Four off it. Sri Lanka are 30/0 after 4 overs. Some dark clouds. Lights are on. Jason Behrendorff comes into the attack.

19:18 hrs IST: FOUR! Shortish from Cummins and Perera pulls it to deep mid-wicket. Another good over for Sri Lanka, 12 runs off it. Sri Lanka are 24/0 after 2 overs. Seems like they have done their homework. Starc to continue.

19:13 hrs IST: Couple of boundaries, one each for Karunaratne and Kusal Perera. Starc struggling to find the correct length. Sri Lanka are 12/0 after the first over. Pat Cummins comes into the attack.

18:21 hrs IST: Another outstanding over, this time from Udana. Just four runs and a wicket. Marsh didn't look comfortable during his short stay at the crease. Australia are 310/5 after 47 overs.

17:59 hrs IST: OUT! And that's the end of a sublime innings from the Australia captain. 153 off 132, including 15 boundaries and five sixes. No relief for Sri Lanka as Maxwell comes to the crease. Smith nearing the three-figure mark. Australia are 275/3 after 43 overs.

17:54 hrs IST: SIX! Slower delivery from Malinga and Smith launches it into the deep mid-wicket stands for a maximum. Moves to 69 off just 55 deliveries. Australia are 269/2 after 42 overs. 45 runs have come off the last three overs.

17:37 hrs IST: Single and that's a half-century for Smith. His eighth half-century in his last 10 World Cup innings and 22nd overall. A brace for Finch off the last ball. Australia are 224/2 after 39 overs.

17:19 hrs IST: Time for drinks! Australia are 195/2 after 35 overs. With Glenn Maxwell and Alex Carey still to come, 340 looks very much gettable. Finch and Smith have stitched an unbeaten 95-run stand off just 73 deliveries.

17:09 hrs IST: SIX! That's a century for Finch. Hadn't converted his previous two half-centuries at this World Cup. Classy innings from the Australian captain! Still 17 overs left. Should look to get many more. Smith, on the other end, is also going well.

17:02 hrs IST: FOUR! Too straight from Siriwardana and Smith guides it behind square. Easy pickings! Australia are 168/2 after 31 overs.

16:50 hrs IST: FOUR! Full and wide from Udana and Smith drives it past point. Superb shot! His side needs more of these. Australia are 132/2 after 28 overs. Dhananjaya to continue.

16:44 hrs IST: FOUR! Full-toss from Udana and Smith times it to deep mid-wicket for his first boundary. Australia are 119/2 after 26 overs.

16:36 hrs IST: SIX! Short delivery from Pradeep, Finch gets into position early and pulls it behind square for a maximum. Australia are 108/2 after 24 overs. Finch 66*, Smith 1*

16:32 hrs IST: OUT! Tossed up from Dhanajaya, Khawaja sweeps it well but finds Udana at mid-wicket. The Australian was struggling with his timing (in the 20 balls he faced). Steve Smith comes to the crease. Looks like the pitch has slowed up a bit. Australia are 100/2 after 23 overs.

16:16 hrs IST: Single and that's a half-century for Finch, his 24th in ODIs and second consecutive in the tournament.  It's been a stupendous innings from him. Should look to get a big one now. Australia are 83/1 after 18 overs.

16:09 hrs IST: OUT! Good length delivery from Dhanajaya, Warner looks to cut but misses and the ball shatters the stumps. Much-needed breakthrough for Sri Lanka. Drinks are on the field now! Usman Khawaja comes to the crease.

16:00 hrs IST: Four singles off Perera's over. 24 deliveries since the last boundary. Australia are 73/0 after 14 overs. Dhananjaya de Silva comes into the attack.

By his own admission, England captain Eoin Morgan is doubtful for the next World Cup game having suffered a back spasm against West Indies, while Jason Roy undergoes a scan for hamstring strain but the skipper insisted it is not a 'panic station' yet. Read full story here

15:47 hrs IST: Dot ball to finish off the over, four off it. Udana has challenged both batsmen so far. Australia are 57/0 after 11 overs.

15:42 hrs IST: Consecutive boundaries from Finch, both through the off-side. Looks in top form. He hit 82 in the previous game against Pakistan. Australia are 53/0 after 10 overs.

15:33 hrs IST: FOUR! Full delivery from Pradeep and Warner hits it well in the gap between backward point and cover point. Single off the last ball for him. Australia are 43/0 after 8 overs. Here comes the first change in bowling. Isuru Udana is into the attack.

15:28 hrs IST: Two very strong shots from Finch - down the ground - in this over. Misfield from Thisara Perera (on the second one). Malinga and Karunaratne aren't impressed. Australia are 33/0 after 7 overs. Finch 25*, Warner 8*

15:15 hrs IST: FOUR! Touch full from Pradeep and Finch clips it past the fielder at mid-on. Moves into double-figures. Australia are 17/0 after 4 overs. Malinga again.

15:07 hrs IST: FOUR! Overpitched from Pradeep, Finch opens the front leg and hits it straight down the ground. Costly over from the Sri Lankan, eight runs off it. Australia are 12/0 after 2 overs.

15:04 hrs IST: FOUR! Fuller delivery from Malinga and Warner just pushes it in the gap between mid-on and mid-wicket for his first boundary of the day. There's some movement for Malinga though. Australia are 4/0 after the first over. Nuwan Pradeep comes into the attack.

14:50 hrs IST: Virat Kohli has scored lot of runs against the likes of Australia, Sri Lanka, New Zealand and West Indies in ODIs. But how has he fared against Pakistan in the 50-over format? Here's a look at his numbers

14:33 hrs IST: Sri Lanka have won the toss and have opted to field.

14:02 hrs IST: Marcus Stoinis will again be missing from the Australia attack with a side strain, while Sri Lanka fast bowler Nuwan Pradeep has recovered from a dislocated and cut finger on his bowling hand.

13:30 hrs IST: Australia have lost their last four completed ODIs at The Oval, their last victory coming against England in 2010.

Sri Lanka captain Dimuth Karunaratne: "Australia have a really good bowling line-up and top order with bat in hand. We need to take early wickets and have to get through the early overs with the bat, that will be the crucial part."

Sri Lanka, the 1996 champions, have so far failed to fire as a batting unit in the two matches they have managed to complete. They were bundled out for 136 in less than 30 overs during their 10-wicket loss to New Zealand. Against Afghanistan, they were bowled out for 201 in 37 overs but sealed a win courtesy a good show from bowlers.

As far as Australia are concerned, their batsmen have done well. David Warner has smashed a century and two half-centuries, while skipper Aaron Finch and Steve Smith have hit a half-century each. Middle-order batsmen Usman Khawaja and Alex Carey have also played some useful knocks.

In the bowling department, Pat Cummins and Mitchell Starc have stepped up when needed. Both have taken nine wickets each so far.

Giridhar Jha / How the larger-than-life Hindi film hero of ­yesteryears gave way to the relatable charm of Shah Rukh and the other Khans.