India produced a clinical performance to hammer arch-rivals Pakistan in their group match of the ICC Cricket World Cup 2019 at Old Trafford, Manchester on Sunday 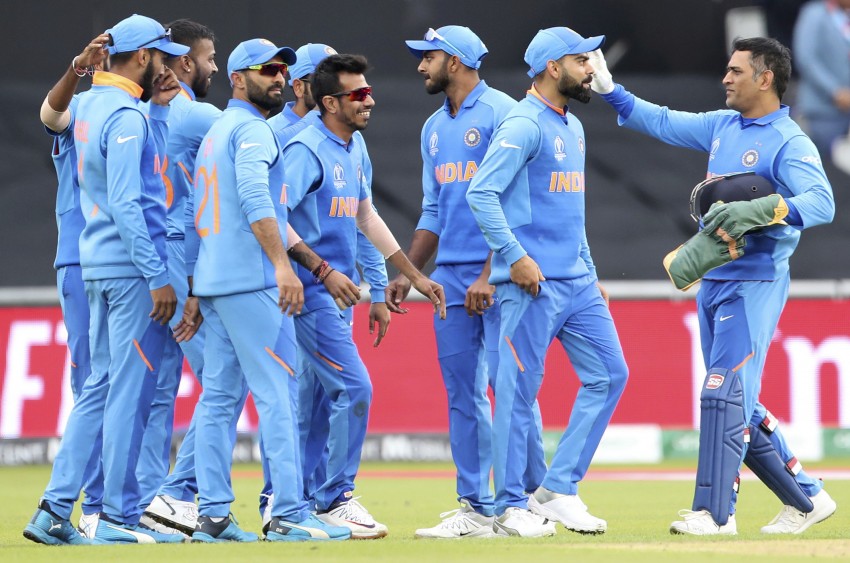 Rohit Sharma produced an elegant hundred before Kuldeep Yadav flummoxed the Pakistani batsmen as India inflicted a humiliating 89-run defeat on their arch-rivals in a much-hyped ICC Cricket World Cup group match at Old Trafford, Manchester, which eventually turned to be a lop-sided affair on Sunday.

Chasing a stiff 337-run target, Pakistan were already down and out when rain stopped play after 35 overs. They had managed just 166 runs for the loss of six wickets, nowhere near the DLS par-score of 252.

When play resumed, the match was reduced to 40 overs with a revised target of 302, which meant that Pakistan required 136 runs from five overs.

If Rohit pummelled a pedestrian Pakistan attack with a brilliant 140 off 113 balls in India's 336 for five, Chinaman Yadav (2/32) broke the rival batting spine by removing set batsmen Fakhar Zaman (62) and Babar Azam (48) in successive overs.

This is India's seventh win over Pakistan in World Cup and like the previous six times, the quality of the contest did not live up to the hype created.

Pakistan skipper Sarfaraz Ahmed erred in his decision making throughout, first with team selection and then by opting to field. The defensive approach throughout the game, also did not help his side.

It was a match where two wrists -- Rohit's supple wrists and Kuldeep's power -- won it for India.

The old adage ‘Revenge is a dish best served cold’ couldn’t have been more apt in cold and wet Manchester evening as 'Men In Blue' exacted the revenge of the 2017 Champions Trophy final defeat.

The first half was all about Rohit pulverising Pakistani bowlers with cuts and pulls while the second belonged to Yadav, who first bamboozled Babar with a break-back delivery and then forced Zaman to play a suicidal paddle shot.

This was after their 104 run-stand as Pakistan from 117 for 1 slumped to 129 for 5 in no time and their fans started trudging out of Old Trafford ground.

Hardik Pandya (2/44) did prove his all-round worth by removing the two veterans Mohammed Hafeez (9) and Shoaib Malik (0) off successive deliveries ensuring that Bhuvneshwar Kumar’s hobbling out due to stiff hamstring does not affect them at all.

Earlier, Despite heavy rains and overcast conditions during the past few days, the pitch had very little moisture and turned out to be a batting beauty which Rohit and the other Indian batsmen exploited to the fullest.

Courtesy Amir, Pakistan did make a comeback in the final few overs as India managed only 38 runs in the final five overs. Vijay Shankar (15 off 15 balls) struggled with his timing, failing to read Amir's cutters.

The strategy to field two spinners -- Imad Wasim (0/49) and leg-spinner Shadab Khan (0/61) -- didn't work for Pakistan. Their veteran part-timers Shoaib Malik and Mohammed Hafeez bowled one over each.

Pakistan bowlers bowled full-length balls, which worked to Rohit's strength as he played two shots - pull and cut during his innings that had 14 boundaries and three sixes.

Unlike the Champions Trophy final, the Indians were positive from the start. Rahul pulled Amir for a boundary and then Rohit creamed off runs from Hasan Ali.

Rohit also treated the fans with some deft late cuts, back cuts and uppercuts and the occasional slog over deep mid-wicket.

When Riaz came to bowl, he erred both in line and length as his strategy to pepper the Indian batsmen with short pitch stuff backfired. He lost rhythm after getting a warning for stepping onto the ‘dangerous area’ and had to come round the wicket.

The only time he looked good was when he bowled full slower delivery to Rahul, who lobbed it to the cover fielder.

Hardik Pandya scored 26 off 19 balls during his hit and miss effort while Mahendra Singh Dhoni edged one off Amir behind the stumps after which rain stopped proceedings.