A benevolent-looking Virat Kohli decided to walk without waiting for the umpire's decision during India's ICC Cricket World Cup 2019 match against Pakistan at Old Trafford, Manchester on Sunday, and it became probably the biggest talking point 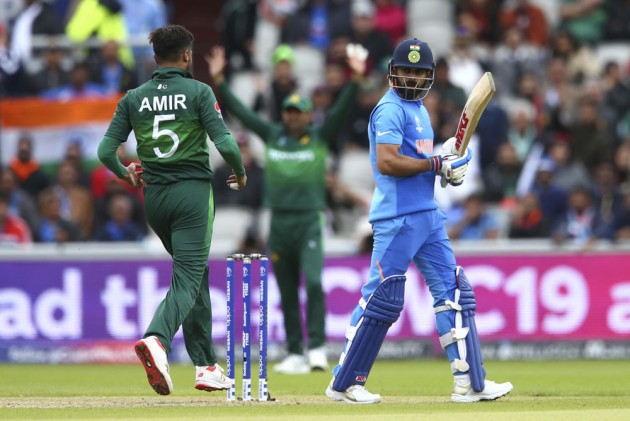 Captain Virat Kohli on Sunday managed to get himself out during India's ICC Cricket World Cup 2019 group match against arch-rivals Pakistan at Old Trafford, Manchester.

Put into bat by Pakistan, Kohli arrived in the centre after the fall of opener KL Rahul (57). The skipper then went onto stitch a 98-run stand with his deputy Rohit Sharma (140) for the second wicket.

After the fall of Rohit, Kohli took over the role of the enforcer. Then came the rain interruption. And soon after the play resumed, Kohli decided to walked, caught behind off Mohammad Amir. He made 77.

But the replays showed no nick, and UltraEdge confirmed it. His decision to walk left fans and pundits divided. And it became the talking point of the match.

BREAKING: @imVkohli finally encounters someone who can get him out - himself. pic.twitter.com/TXFFE3sVJC

When it wasn't out but Virat Kohli walks away#WhistleForIndia pic.twitter.com/KRreHGJMgf

..when virat kohli walked out.. later realised he was not out...#INDvPAK pic.twitter.com/mXEcRp7qVb

@SarfarazA_54 Spread too much laziness over the ground that @imVkohli left from the ground even he was not out.
Anyways 337 is more than enough for Pak ðÂÂÂÂÂÂÂÂÂÂÂÂ#ICCWorldCup2019 #INDvPAK #IndiaVsPakistan #BCCI #AskTheExpert What will you say Viru Paazi @virendersehwag pic.twitter.com/xvX3Wh0nqL

But in the process, he became the fastest to reach the 11000 runs in ODIs, breaking Sachin Tendulkar's record.