Gautam Gambhir's Patriotism Makes Him Ideal Choice For BJP. Here Are Some Of His Mercurial Quotes

Gautam Gambhir joined the BJP on Friday. The former Indian cricketer is known for his aggression and flamboyant nationalistic quotes 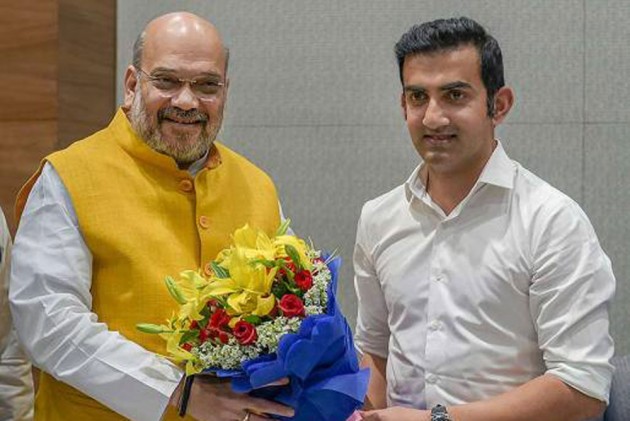 Former Indian opening batsman Gautam Gambhir joined the Bharatiya Janata Party (BJP) on Friday in Delhi, a move that Union Minister Arun Jaitley termed as an "important induction" to the party ahead of the 2019 Lok Sabha elections.

Gambir is known for his on-field aggression and his run-ins with top cricketers like Shahid Afridi and Virat Kohli are etched in the minds of cricket lovers.

Gautam Gambhir's forthright personality makes him a go-to man in social media. He loves battles and never takes a step backwards to assert his views on several subjects.

The 37-year-old former Delhi Daredevils and Kolkata Knight Riders' skipper has made some strong statement that underlined his patriotic feelings towards the armed forces. His thoughts, especially on matters dealing with Pakistan, have earned him much praise, and sometimes flak from the netizens.

I have joined @BJP4India to serve the country with right intent and honesty. I hope through this I can make some meaningful difference to the lives of my people.

It was Gambhir who said that India should not play Pakistan in the upcoming Cricket World Cup in the United Kingdom. Whether it was Gambhir the would-be politician or the ex-cricketer who was speaking is anybody's guess!

Here are some of his most famous quotes:

When he urged countries to stop give economic aid to Pakistan after the Pulwama attack:

I’d urge each and every country to stop aid to Pakistan and most of all my second most favoured cricketing nation, Australia. India fears that your dollars are not being used for right causes.

When he expressed his unconditional support for the armed forces:

Call me whatever you want; I'll always speak for the Army. Without understanding the extreme conditions they're in, you can't question the extreme action they take.

When he gave his frank opinion on the recent terror attack in New Zealand:

A big part of the blame for Christchurch killings should rest with us and the “propaganda” media. We had conveniently branded Muslims as oppressive to gain applause from the majority of the Indian gallery on social media and get TV ratings. For me secularism is the best thing about democracy

When he hit out at AAP, Congress and BJP for their spending spree on adverts:

Even leaders of BJP India and Congress should do advertising campaigns from their own pocket rather than using taxpayer’s money. That money should only and only be for development and uplifting of a common man.

When he gave his opinion on the importance of bowlers:

I have always maintained that bowlers win you a cricket match whatever the format.

When he tried to distinguish his on and off-field personas:

I am a completely different person off the field, and my friends and family can vouch for that.

When he expressed his opinion on security for separatists in the wake of the Pulwama attack:

While our men are being mercilessly killed why should we give security to Hurriyat leaders? Come on BJP lets do away with any such gestures. And in case whom must these leaders fear? We need security from Hurriyat rather than for them.

This one may earn him the title of a "turn quote", but now that he is a politician, it all makes sense:

There have been speculative stories that I am joining politics. Please allow me to clarify that there’s no truth in this. At the moment, I am merely a retired cricketer who like all of you is waiting for India’s series win in Australia.

When expressed his thoughts on the national flag on the eve of the Independence Day:

And lastly, his universal advice on getting out of comfort zones:

Sometimes it's important to get out of that comfort zone and, I think, try new things, and sometimes you can express yourself better.