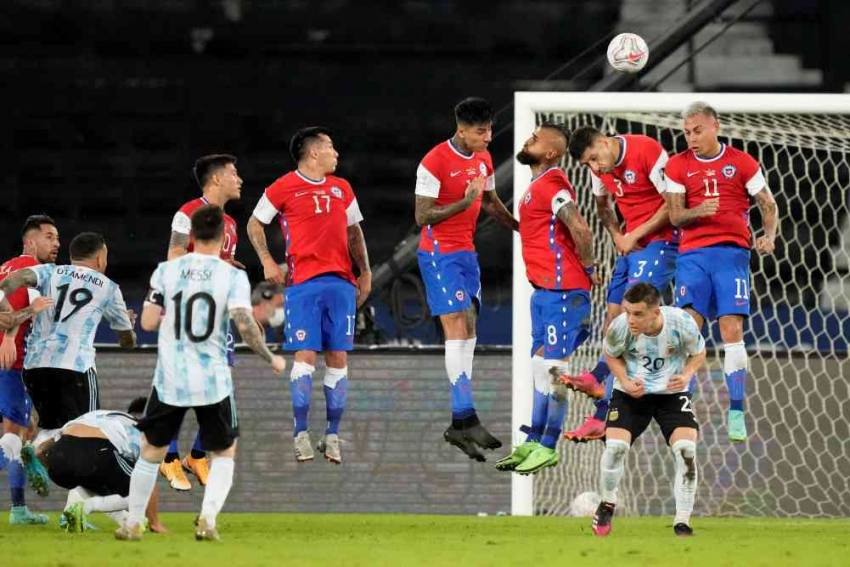 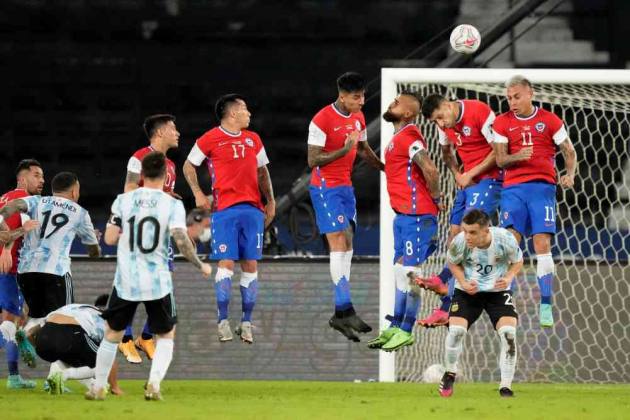 Despite Messi's intense performance, Argentina was held 1-1 by Chile in its Copa America opener. The game at the Nilton Santos stadium in Rio de Janeiro was also marked by a tribute to Argentine football great Diego Maradona, who died in November at age 60.

Messi, who turns 34 this month, might have one of his final chances of winning a title with Argentina at the Copa America.

He said ahead of opening game that winning with his national team is “the biggest dream” of his decorated career, despite all the individual success and club titles with Barcelona.

Argentina appeared to be ready to start giving Messi what he craves. Coach Lionel Scaloni's lineup wasted three clear opportunities between the 16th and 18th minutes, one from Lautaro Martínez and two for Nicolás González.

And then Messi opened the scoring in the 33rd after a free kick that Chilean goalkeeper Claudio Bravo couldn't stop despite getting a touch on the ball to his left. Argentina continued to pressure Chile, which was missing injured striker Alexis Sanchez.

But Chile transformed into a more attacking team in the second half and earned a penalty after video review. Arturo Vidal's shot from the spot was stopped, but Eduardo Vargas nodded into the empty goal to level the scoring in the 57th.

Messi continued to create opportunities until the end of the match, but his teammates showed the same difficulty to deliver goals as they did in the 2-2 draw at Colombia in a World Cup qualifier in Barranquilla last week.

“This match got complicated to us," an exhausted Messi said after the draw.

“We needed to be calm, have the control of the possession and play more quickly. The penalty changed the match, too.”

The superstar also complained about the apparently irregular pitch at the stadium.

Striker González admitted he had “made too many mistakes.”

“We should have been much better at the finishing. I am upset, but also happy for what we showed today,” he said.

Chile's Vidal said getting a draw despite Messi's performance was a good result for his team, which is in transition with new coach Martin Lasarte.

“Leo always makes you change your formation. Thank God we managed to secure a draw,” he said.

“We are still recovering our intensity, changing the system a little. It was a tough match, we tried to keep the order."

Copa America was moved at late notice to Brazil after Colombia and Argentina were dropped as co-hosts. Many health experts criticized the move to a country where the COVID-19 death toll is nearing 490,000.

Argentina and Chile also drew 1-1 two weeks ago in Santiago del Estero in a World Cup qualifying game. The rivalry between the two got bigger after Chile beat Messi's team on penalties in the 2015 final of Copa America and in the decider of Copa America Centenario the following year.

Argentina beat Chile 2-1 in their previous Copa America encounter two years ago, in a game that ended with Messi being sent off after a disagreement with defender Gary Medel.

Paraguay leads group A after a 3-1 win over Bolivia at the Olimpico stadium in Goiania. Bolivia scored first via Erwin Saavedra's first-half penalty, but Paraguay changed its fortunes after the break with goals by Alejandro Romero and a brace by Ángel Romero.

Argentina's next match is against Uruguay on Friday. Chile will face Bolivia on the same day. Paraguay returns to action next Monday against Messi's team.