Real Madrid kept up the pressure on LaLiga leaders Atletico Madrid as a brace from Karim Benzema helped seal a 3-1 win over Celta Vigo on Saturday. (More Football News)

Benzema produced two clinical finishes inside the opening 30 minutes to put Madrid 2-0 up at Balaidos, although Santi Mina pulled one back for the hosts against the run of play before half-time.

Despite plenty of pressure from Eduardo Coudet's side in the second half, Madrid held firm and secured the victory late on through Marco Asensio to extend their unbeaten LaLiga away run to 10 games – the first time they have achieved this since May 2016 when they went 11 without defeat on the road.

The result moved Zinedine Zidane's men above Barcelona into second, three points behind Atleti, but Diego Simeone's men can restore the six-point advantage over their neighbours if they overcome Deportivo Alaves on Sunday.

Madrid went ahead with their first shot on target in the 20th minute, Benzema superbly steering into Ivan Villar's bottom-left corner after a neat turn and pass from Toni Kroos.

Vinicius Junior then inexplicably chested over from four yards with the goal at his mercy, but his blushes were spared on the half-hour mark when Benzema grabbed his second.

Kroos was again the provider, the German picking Renato Tapia's pocket on the edge of the area and feeding Benzema, who slotted past Villar for his 17th LaLiga goal of the season.

Celta clawed their way back into the game five minutes before the interval when an unmarked Mina headed beyond Thibaut Courtois from Denis Suarez's free-kick.

Courtois had to be alert shortly after the hour mark to repel Iago Aspas' effort from distance as Celta pushed forward in search of a leveller.

Aspas then struck the post with a deflected free-kick inside the final 10 minutes but it was Madrid who had the final say, substitute Asensio guiding Benzema's cross home deep into stoppage time. 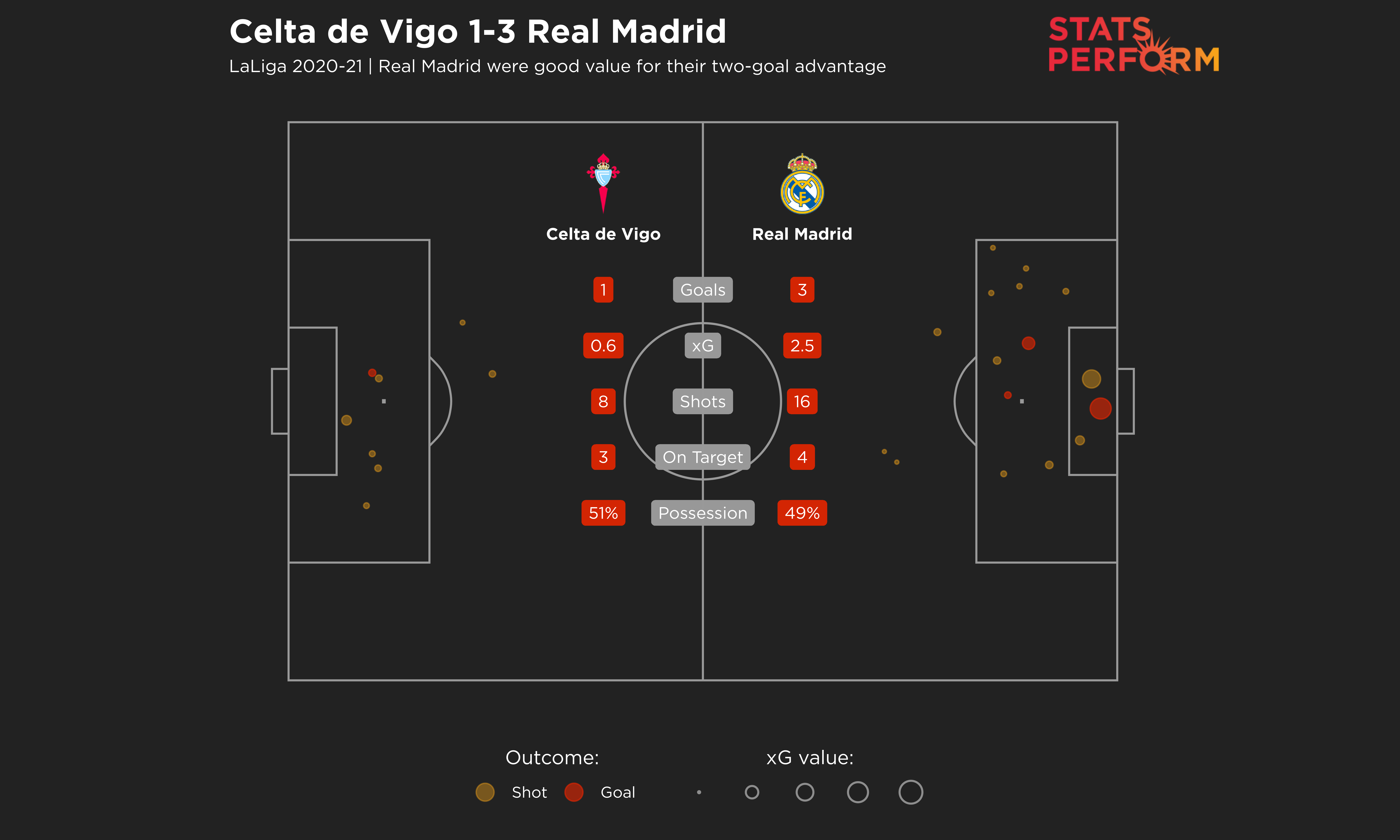 What does it mean? Madrid enjoy themselves at Balaidos again

Madrid left it late to ensure the scoreline better reflected their dominance, with the champions taking 16 shots to the hosts' eight at a ground where they have won six of their last seven games.

The pressure is now on Atleti and Barca for their games on Sunday, with both sides knowing Los Blancos – and an in-form Benzema – are ready to pounce should they slip up.

Benzema has now scored in each of his last six games in all competitions (eight goals), equalling his best scoring run for Madrid (six games between January and February 2016). This was his fifth LaLiga brace of the season, level with his tally in 2018-19 and one behind the six he achieved in 2011-12. 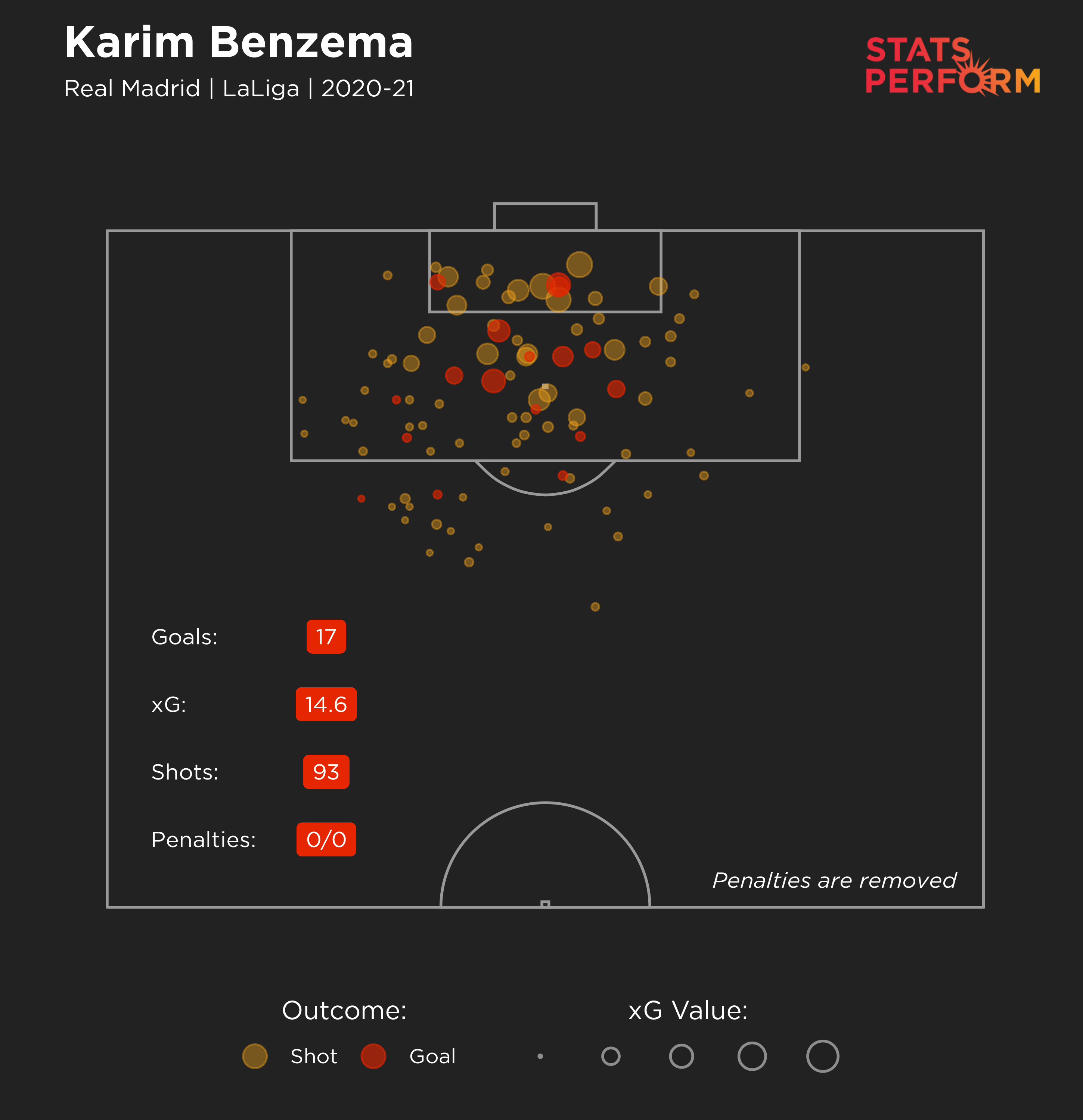 Vinicius has scored just three goals in 25 top-flight appearances this season and it is not hard to see why after another poor showing in front of goal. The 20-year-old had four shots, one of which really should have been buried in the first half, and none were on target. His all-round game was not much better either, with no outfield Madrid player registering a lower pass completion rate than his 78.3 per cent and only Luka Modric losing possession more than his 12 times. 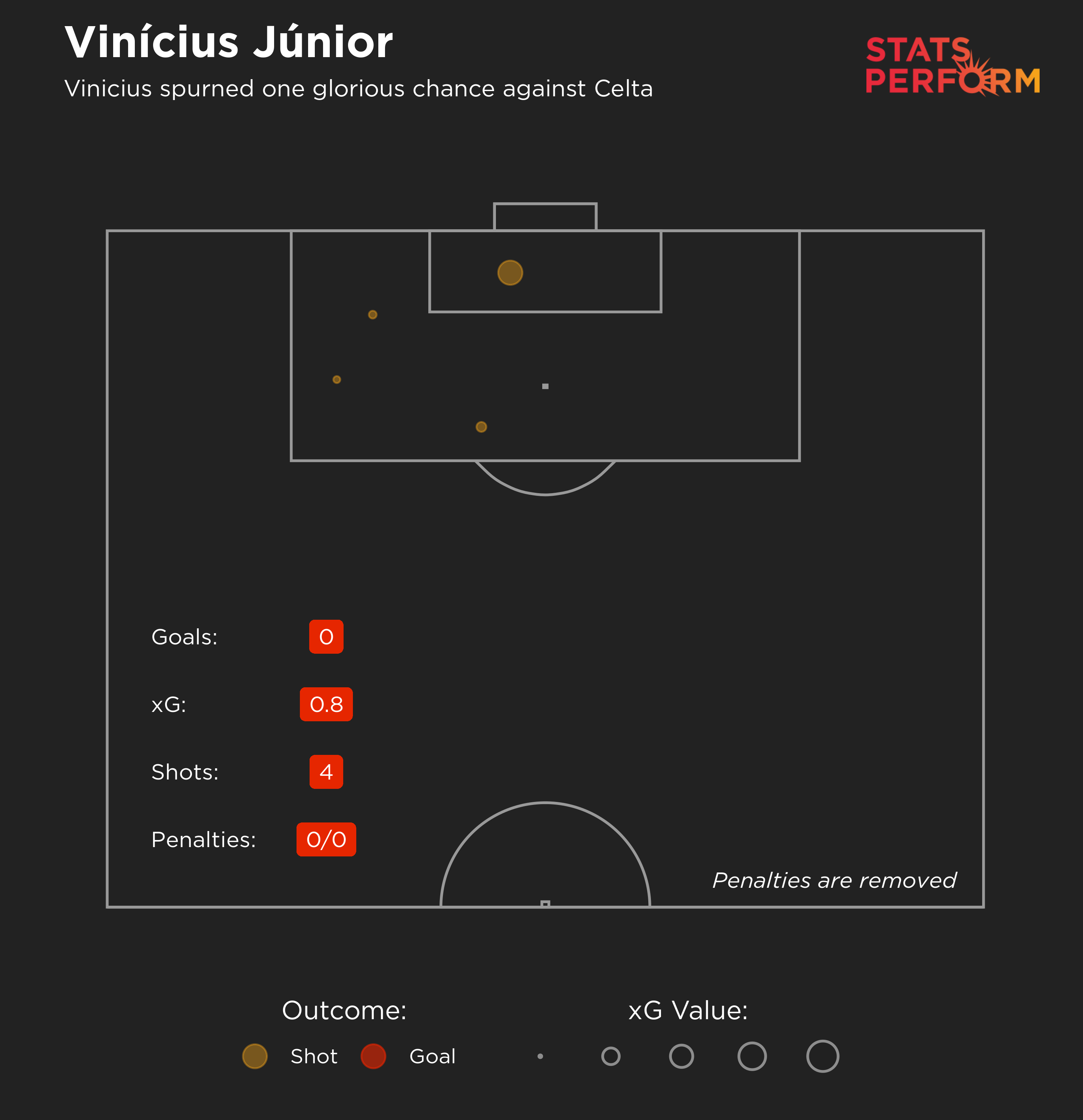 - Real Madrid's Kroos has been involved in six goals (three goals and three assists) in seven games against Celta at Balaidos in LaLiga. The German midfielder assisted twice in the same match in the competition for the sixth time in his career.

- Asensio has scored in consecutive games with Madrid in all competitions (he scored against Atalanta in the Champions League on Tuesday) for the first time since October 2017 (vs Eibar in LaLiga and Fuenlabrada in the Copa del Rey).

- Mina has scored four goals against Madrid in LaLiga (three with Celta and one with Valencia). He has only scored more goals against Rayo Vallecano (six) than he has Los Blancos in the competition (four, as many as against Las Palmas and Levante).

6 - Karim Benzema has scored in each of his last six games in all competitions (eight goals), equaling his best scoring run for @realmadriden (six games between January and February 2016). Monsieur. pic.twitter.com/RSWylsw7Gq