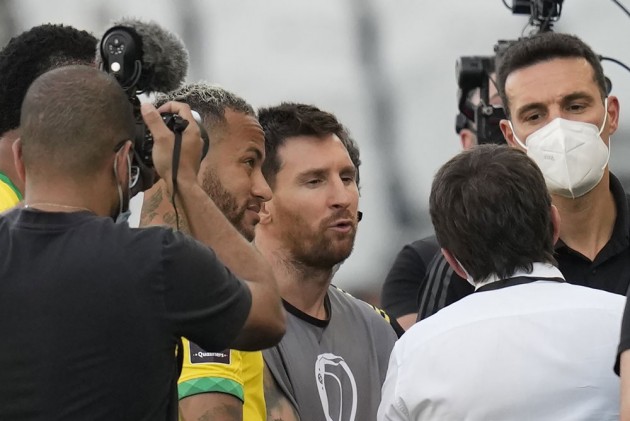 They were pitch intruders with a good reason, they claimed, to be confronting players only seven minutes into Brazil's World Cup qualifier with Argentina. (More Football News)

As Argentina great Lionel Messi and Brazil star Neymar watched on, the qualifier was halted on Sunday and chaos ensued.

Four Argentina players from English Premier League clubs were accused by agents of Brazil's health agency, Anvisa, of breaching coronavirus restriction rules by not declaring on arrival in Brazil that they'd been in England within the previous 14 days.

But why did it take Anvisa until Sunday to directly intervene, given how high profile the players are and how seemingly widely known their movements were?

There was considerable focus on the trips from England even before Aston Villa players Emiliano Martinez and Emiliano Buendia, and Tottenham duo Giovanni Lo Celso and Cristian Romero flew to South America.

The initial spotlight was on Britain's requirements for anyone returning from South America to enter mandatory hotel quarantine for 10 days. Premier League clubs collectively agreed that no one would travel to CONMEBOL's games, defying an order from FIFA that both regulates world football — giving it powers to enforce players are released for their countries — and organizes the World Cups that fund the sport's governing body.

FIFA President Gianni Infantino's plea for the players to be exempt from quarantine after traveling to countries on the so-called “red list” was rejected by British Prime Minister Boris Johnson.

But Villa eventually allowed its players to go to South America on the proviso that they play in only two of Argentina's three games. That was designed to reduce the time the players would miss with their Villa employer.

“We think this plan respects the long established call-up rules and balances the importance which top players place on representing their countries in important matches with the best interests of Aston Villa,” the club said.

But Tottenham never said anything about authorizing the trip for Lo Celso and Romero.

The Argentina squad arrived in Brazil last Friday morning from Caracas, where they'd beaten Venezuela 3-1 the previous night. Now the focus is on whether — as Brazil's health agency alleges — the quartet did not tell immigration officers they had been in Britain within the previous two weeks. Britain is on Brazil's red list due to the high number of COVID-19 cases.

A Sao Paulo state health secretariat document obtained by The Associated Press says the organization received the first rumors about players giving false information to enter the country just before midnight, about 15 hours after they left the airport.

The same document says Fernando Ariel Batista filled the forms for all the players. Batista, the coach of Argentina's Under-20 team, on Monday denied filling in the forms or traveling to Brazil.

The presence of the four England-based players in the squad was well known as was the fact they'd played in the Premier League the previous weekend. Anvisa first informed Brazilian and Argentine football officials Saturday morning that the players had apparently provided false information on their arrival in Brazil.

Rather than deporting the players, as Anvisa noted was within its powers, quarantine was recommended. Argentina was also advised to seek a last minute authorization from the Brazilian government, according to the Sao Paulo state document.

A separate Brazilian health ministry document obtained by AP says the final request for a quarantine exemption for the players was denied at 3:09 p.m. on Sunday — 51 minutes before kick-off. The decision was sent to Alejandro Dominguez, the president of South American soccer body CONMEBOL.

“Regarding the principle of precaution, measures of exceptional entry in the country must be adopted before boarding (flights to Brazil), which was ignored in this case,” the document, signed by Brazilian health ministry's joint executive-secretary Alessandro de Vasconcelos, said.

“We recommend that the four athletes remain in quarantine at the hotel, complying with current health rules in Brazil.”

Despite media coverage questioning how the players were free to play, the game started with Lo Celso and Romero and Martinez in action. The game lasted only seven minutes before Anvisa officials walked on the pitch to remove the four players in question.

Just how much did FIFA's match delegate know about the quarantine dispute with the Brazilian authorities and could there have been an intervention to stop the players in dispute featuring in the game? Now FIFA's disciplinary committee will analyse the reports from the match delegate and referee.

Brazil remained on the pitch under instructions of the coach and the team held a training session. Argentina went back to its locker room and stayed there for hours until heading straight to the airport.

The score was 0-0 when the match was stopped. CONMEBOL says it was suspended, rather than abandoned. But it's clear the game won't be resumed this week — with further games on Thursday night for the teams. If Argentina is found to be at fault, Brazil will likely be awarded a 3-0 victory by default, helping its bid to qualify for next year's World Cup in Qatar.

“The match could have continued, the interruption was a decision by sports executives," Anvisa director Alex Campos said.

"Argentina tried to put pressure on Brazilian authorities and chose to leave if they didn't have those players.”

Brazilian federal police said on Monday they are investigating the four players for allegedly providing false information upon arrival in Sao Paulo. They were allowed to return to Buenos Aires on Sunday night after giving written statements.

The Brazilian Chief of Staff office said in a statement it had not received requests for exceptional waivers for Argentina players. One conflicting issue is who should have applied for the waivers — the hosts or the visitors.