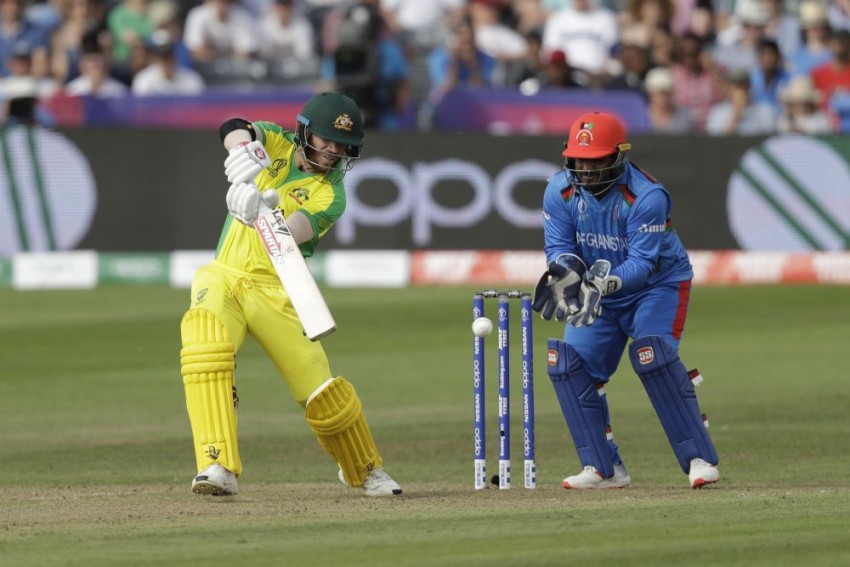 Australia defeated Afghanistan by seven wickets in their opening game of the ICC World Cup 2019 at Bristol on Saturday. Opting to bat first, Afghanistan couldn't get a partnership going and were bowled out for 207 in 38.2 overs. For Australia, Pat Cummins and Adam Zampa took three wickets each. In response, David Warner's unbeaten 89 and skipper Aaron Finch's 66 helped the defending champions seal the chase with 91 balls to spare. Get highlights of Afghanistan vs Australia here (SCORECARD | NZ vs SL | POINTS TABLE | FULL SCHEDULE)

David Warner, Man of the Match: "Great win and we hope to keep the ball rolling. I think there were some nerves getting to the training and then coming out today. Got relaxed once Finchy started to get going. The way I started out today, I had to take time to move my feet and get my head into position, considering that I had only played T20 cricket over the last one year. Us batters like to see that (some help for the bowlers). Need to keep our nerves and look to see through that period. It's a different contrast from the team back then (in 2015). There was more experience at that point but this squad also has great energy in it."

23:26 hrs IST: Five singles off Rashid's seventh over. Australia are 171/2 after 29 overs. Dawlat Zadran comes back into the attack.

23:10 hrs IST: OUT! Rashid gets Khawaja's scalp. First wicket for the leggie in 50-over World Cup. Steve Smith comes to the crease. Warner and Smith once again batting together for Aussies.

23:04 hrs IST: Fifty for Warner on his comeback game for Australia. He'll look to stay unbeaten. Australia are 148/1 after 23 overs.

22:37 hrs IST: OUT! Naib removes his counterpart. But what an innings from Finch. 66 off 49. Would have loved to get past the three-figure mark but he has done his job. Usman Khawaja comes to the crease.

22:24 hrs IST: FOUR! That's fifty for the Australian skipper. Too short from Rashid Khan, width on offer, Finch cuts it to deep backward point boundary. What a way to reach the landmark!

22:20 hrs IST: SIX! Touch short from Naib and Finch pummels it over deep mid-wicket for a maximum. Australia are 66/0 after 12 overs.

22:09 hrs IST: SIX! Short delivery from Zadran and Finch pulls it over mid-wicket. Moves into 30s. Australia are 54/0 after 9 overs. Gulbadin Naib comes into the attack.

21:47 hrs IST: Another boundary for Finch. Looks in great form. Australia are 29/0 after 4 overs. Dawlat Zadran comes into the attack.

21:42 hrs IST: SIX! Fuller delivery from Mujeeb and Finch launches it over wide long-on for a maximum. Another costly over from Mujeeb, 14 runs off it. Australia are 24/0 after 3 overs. Hassan to continue.

21:39 hrs IST: Maiden over from Hassan. Meanwhile, New Zealand crushed Sri Lanka by 10 wickets in their opening game of the tournament at Cardiff.

21:36 hrs IST: Consecutive boundaries for Finch. Australia are 10/0 after the first over. Hamid Hassan comes into the attack.

21:04 hrs IST: OUT! That's it. Cummins takes the last wicket (of Mujeeb). Afghanistan bowled out for 207 in 38.2 overs. Three wickets each for Cummins and Zampa. Join us in 30 minutes for Australia's chase.

20:45 hrs IST: OUT! Cummins strikes, gets Dawlat Zadran. Second wicket for the Australian. Afghanistan are 166/8 after 35 overs.

20:41 hrs IST: STOINIS, YOU BEAUTY! Gets Naib and Najibullah in one over. Just the wickets Australia wanted. Afghanistan are 162/7 after 34 overs. Cummins is back into the attack.

20:29 hrs IST: SIX! Slower length ball, outside off, Naib creams it over long-on for a maximum. 46 runs have come off the last five overs. Afghanistan are 153/5 after 32 overs. Starc again.

20:00 hrs IST: Boundaries hard to come by but luckily, Afghanistan have a partnership developing. They are 107/5 after 27 overs.

19:45 hrs IST: Thirteen runs off the last two overs. Afghanistan are 90/5 after 23 overs. One more wicket and Afghanistan will find it difficult to get past 180.

19:31 hrs IST: OUT! Shah falls. The pressure was created by Zampa & Co by not giving away runs. Gulbadin Naib comes to the crease. Afghanistan are 77/4 after 20 overs.

19:23 hrs IST: Zampa continues to keep it tight. Afghanistan are 73/3 after 18 overs. Stoinis is back into the attack.

19:15 hrs IST: FOUR! Too short from Zampa, Shah goes back and plays the pull shot through deep mid-wicket for a boundary. Afghanistan are 64/3 after 16 overs.

19:06 hrs IST: OUT! Tossed up from Zampa, outside off, Shahidi comes down the track and attempts to reach it but misses, and Alex Carey knocks off the bails. Mohammad Nabi comes to the crease. First World Cup wicket for the leggie in his first over.

19:02 hrs IST: NCN and Stoinis bowling well in tandem. Afghanistan are 51/2 after 13 overs. Some spin now. Adam Zampa comes into the attack.

18:58 hrs IST: Another good over from Stoinis, only four runs off it. Afghanistan are 49/2 after 12 overs. Australia need to strike here before this partnership gets threatening.

18:53 hrs IST: FOUR! Short from Coulter-Nile, Shahidi looks to pull but gets a top-edge and it sails over the head of the wicket-keeper. Afghanistan are 45/2 after 11 overs. Rahmat 26*, Shahidi 14*

18:49 hrs IST: FOUR! Short delivery from Stoinis and Shah pulls it in the gap between mid-on and mid-wicket. Afghanistan are 37/2 after 10 overs. Coulter-Nile again.

18:44 hrs IST: Just three runs have come off the last 12 balls. Afghanistan are 33/2 after 9 overs. Marcus Stoinis comes into the attack. Expect some cutters.

18:30 hrs IST: FOUR! Short ball from Cummins, Shah gets into position early and pulls awa through square leg. Afghanistan are 23/2 after 6 overs. Nathan Coulter-Nile comes into the attack.

18:22 hrs IST: FOUR! First boundary for Shah. Afghanistan need more of these (and of course, a big partnership). They are 17/2 after 4 overs. Meanwhile, New Zealand have got off to a great start in their chase of 136.

18:17 hrs IST: Another good over from Starc. No margin for error. Get a feeling something is going to happen here. Afghanistan are 11/2 after 3 overs.

18:12 hrs IST: Good start from Cummins, a wicket and three runs. Afghanistan are 6/2 after 2 overs. Starc to continue.

18:09 hrs IST: OUT! Edged and gone! Zazai departs for a second-ball duck. Magnificent from Cummins. Bowling the right line. Hashmatullah Shahidi comes to the crease.

18:05 hrs IST: Dot ball. Excellent start from Starc. Afghanistan are 3/1 after the first over. Pat Cummins comes into the attack.

18:03 hrs IST: OUT! And Starc strikes. The inswinger does it for him. Shahzad has no answer to it. Rahmat Shah comes to the crease.

18:01 hrs IST: Some shape for Starc. Shahzad and Hazratullah need to careful. That inswinging delivery is on its way.

17:32 hrs IST: Afghanistan have won the toss and have opted to bat

"I don't think they have got a point to prove, they will just be happy to be back playing for Australia," said Lee, who won the tournament with Australia in 2003. "They have been welcomed back to the Australian cricket team with open arms, and I reckon they have a shot at winning.

"You have got the Barmy Army, you have got guys like Kevin Pietersen chirping at me already. They are going to cop some sledging, but you need thick skin," he added.

15:19 hrs IST: Australia defeated co-hosts New Zealand in the 2015 World Cup final, yet it is England, the top-ranked team and 2019 hosts, who have been talked up as the clear candidates this year. However, Merv Hughes claims the defending champions, boosted by the returns of Steve Smith and David Warner, are in "a pretty good position".

14:51 hrs IST: Hello and welcome to Outlook's live coverage of the fourth match of the 2019 Cricket World Cup between defending champions Australia and Afghanistan.

Warner, who was a doubtful starter due to an injury, has been confirmed fit to open the batting alongside skipper Aaron Finch. Afghanistan, on the other hand, are high on confidence after defeating Pakistan in a World Cup warm-up match and will look to carry forward the momentum.

Australia endured a tumultuous past year but are peaking at the right time and are considered one of the favourites in the 50-over showpiece event. After edging out hosts India 3-2 in a five-match ODI series in March, Australia crushed Pakistan 5-0 in the UAE.

Adam Zampa and Nathan Lyon will take care of the spin department.

Afghanistan witnessed a captaincy change just two months before the start of the World Cup, with Gulbadin Naib named skipper of the ODI side in place of Asghar Afghan, a move that did not go down well with some senior members of the team like Rashid Khan and Mohammad Nabi.

But Afghanistan look confident to cause upsets, provided they are consistent.