Media Can Act As A Bridge To Ensure Peace In Pakistan And Afghanistan: Pak Army Chief Bajwa 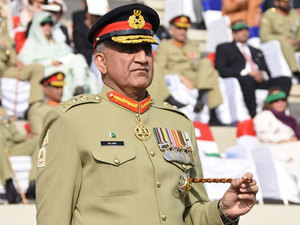 Pakistan Army Chief General Qamar Javed Bajwa said on Friday that prevalence of peace in Pakistan and Aghanistan share an interlinked nexus and anything that tries to threaten that connection, should be defeated.

This statement came when  General Bajwa was talking to a 15-member Afghan media delegation who met him during a visit to the GHQ, according to a statement by the Army.

General Bajwa said the media can act as a bridge to create a conducive environment for promoting cultural and social as well as people-to-people engagement between the two countries.

“It is the responsibility of the media and people to identify and defeat the spoilers of peace. Peace in Afghanistan is Pakistan’s earnest desire because peace of the two countries is interlinked,” he said.

He went on to add that the "spoilers" will not be allowed to derail the peace process.

Referring to Pakistan’s comprehensive border management regime, he said security of borders is in the best interest of the two countries.

Talking about the benefits of regional connectivity for the two countries, he highlighted the importance of restoration of peace in Afghanistan for sustainable development of the region.

He said Pak-Afghan youth is the hope for future peace and progress of the region.

Since the announcement of the withdrawal of US forces by August 31, violence has been rising in Afghanistan and efforts to broker a peace settlement between the Afghan government and insurgent Taliban have slowed.