Home  »  Website  »  National  » Opinion  »  Can BJP Do A Yediyurappa In Maharashtra?
Editor's Take

The BJP has been left embarrassed in Maharashtra. But the epitaph for its political aspirations in the state has not yet been written. 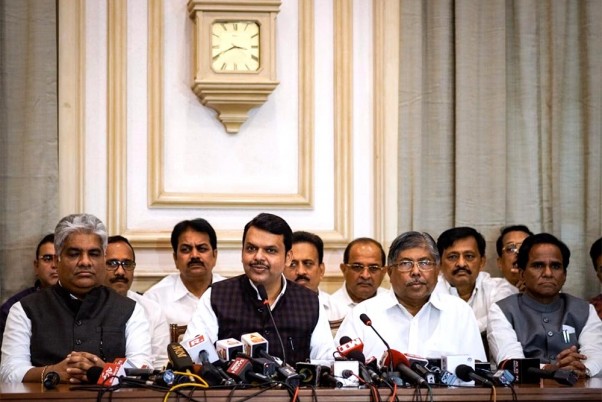 Devendra Fadnavis announced his resignation as the chief minister of Maharashtra during a press conference, in Mumbai.
Apoorva Salkade/Outlook
Ruben Banerjee 2019-11-26T19:54:26+05:30 Can BJP Do A Yediyurappa In Maharashtra?

The BJP is surely embarrassed in the wake of its Maharashtra misadventure, but it’s unlikely that it will entirely give up on its ambition to rule the state despite Devendra Fadnavis’s hasty resignation as the chief minister.

Smarting under Tuesday’s political setback and clearly outsmarted by Sharad Pawar, the BJP will lie low for now. But once public memory over its unsavoury bid to form the government fades, the party will in all probability seek another shot at power by destabilising the Shiv Sena-NCP-Congress coalition that, in all likelihood, will now form the government.

A template clearly exists for the BJP on how to go about it once the dust settles. The party had attempted to foist its rule in Karnataka in May 2018 when the governor swore in BS Yediyurappa as the chief minister as hurriedly as the Maharashtra governor read the oath of office to Fadnavis this time.

Yediyurappa too didn’t have the numbers but the governor gave him 15 days to prove his majority. But then the Supreme Court stepped in and ordered a floor test within 24 hours. Unable to muster support, Yediyurappa was also forced to resign.

But BJP’s ambition to rule a southern state did not dissipate despite the setback. The HD Kumaraswamy led JD(S)-Congress coalition came to power in Karnataka and the BJP’s covert attempts to destabilise it began almost immediately. Its efforts bore fruit a year later, in July 2019, when it first got 17 ruling coalition legislators to resign and then defeated the Kumaraswamy government on the floor of the house. Yediyurappa was back as the chief minister.

With Maharashtra’s recent political trajectory almost mirroring what transpired in Karnataka, a similar ending cannot be ruled out. Agreed Maharashtra is not Karnataka and someone like Pawar will never be as easy a pushover as Kumaraswamy. But a disparate coalition as that of Shiv Sena-NCP-Congress leaves enough chinks for a hungry-for-power BJP to exploit.

If the Shiv Sena-NCP-Congress are sinking their inherent differences now to come together to keep the BJP at bay, there is no guarantee that their new-found bonhomie will continue even in the future. Politics is about being in power and legislators who fail to become ministers in the new formation may find reasons to exact revenge at some later date.

True, turning the tables on the government in Maharashtra will be a far bigger task for the BJP than it was in Karnataka. For one, Maharashtra has a bigger state assembly and the numbers the party will require to win over to their side will be higher. Splitting a party such as the Shiv Sena or the NCP may also prove to be far tougher. But Congress with 44 MLAs and the presence of some two dozen independents in the newly elected assembly do offer the BJP with some tantalising prospects that it is likely to explore at an opportune moment.

A lot certainly would depend upon how the new coalition functions and succeeds in holding its flock together. But should there be dissensions within its ranks, BJP will always be in with a chance to do a Yediyurappa in Maharashtra. To cut a long story short, the BJP has been left embarrassed in Maharashtra. But the epitaph for its political aspirations in the state has not yet been written.


Also Read | After The Great Betrayal, Will Ajit Pawar Be Able To Regain His Position In NCP?

Militants Kill Two During 'Back to Village' Function In J&K, Govt Says Programme Will Continue