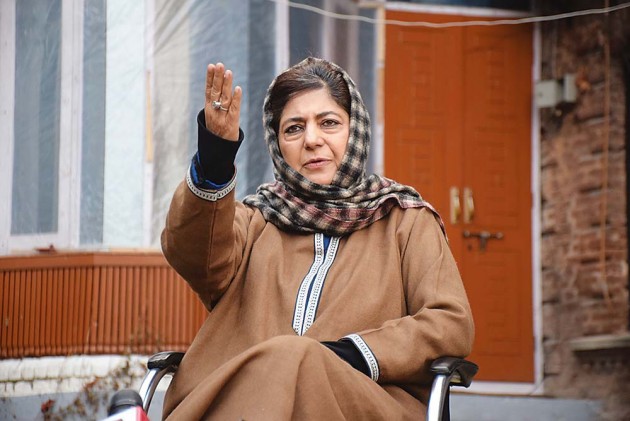 Saying situation is not normal in Jammu and Kashmir, PDP president Mehbooba Mufti has said her party will contest the assembly elections in the erstwhile state.

J&K is being directly ruled by Centre for over two years now, since 5 August 2019, when the erstwhile state was downgraded and divided into two Union Territories—J&K and Ladakh.

The former chief minister said the situation in Jammu and Kashmir is far from normal which is evident from the twin attacks in Kulgam district in south Kashmir where a policeman and a non-local labourer were killed by militants on Friday.

“PDP will fight the (assembly) elections. So far an alliance is concerned, the question is premature but one thing is absolutely clear that we will not go with that party (BJP),” Mufti said.

The BJP walked out of the PDP-led government in 2018, ending a three-year-old alliance with the party.

Mehbooba has made it clear time and again that she herself is not going to fight the assembly elections as her objective is to seek restoration of Article 370 of the Constitution which was abrogated by the BJP-led government in August 2019.

“Their claim that everything is normal in Jammu and Kashmir is absolutely wrong. People are silent and silence does not mean that the situation has improved. They are feeling suffocated while they (BJP) are trying to portray that everything is alright,” she said.

Referring to the one-day strike call given by Jammu Chamber of Commerce and Industry against for September 22 against alleged attempts to finish local trade by allowing big corporate chains to open their outlets, she said those who the BJP claimed were in support of the abrogation of Article 370 are going on a protest strike.

“At least they are registering their protest but in Kashmir, the people cannot even do this. They are forced to open their shops if they resort to strike,” the PDP leader said.

“They are only concerned about the commission which they use to buy opposition MLAs to bring down an elected government,” she alleged.

Asked about the removal of the national flag from a building at Kotranka in Rajouri district during her visit, she said, “I do not have any information. Ask the police about this.”

Police on Saturday said an FIR was lodged against unidentified persons for removing the national flag from a building in Kotranka during the intervening night of September 17 and 18.

In response to a question about the visit of 70 union ministers to different parts of Jammu and Kashmir and their remarks that Article 370 was a hurdle in the development of the Union Territory, Mehbooba said, “It is nothing but a photo opportunity to portray that the situation is normal. But if the situation is normal, why are District Development Council (DDC) members kept in hotels and other buildings under security and not allowed to move freely.”

“They should go to Uttar Pradesh to campaign for the next assembly elections. They should go there to find out the reasons for dumping of bodies in the sacred river Ganga and the condition of the people,” Mehbooba said.

About the slow pace of work on various projects in Jammu, She said, “Nothing is happening in Jammu and Kashmir. Many of these projects were sanctioned during the previous government.”

She alleged that the corruption in Jammu and Kashmir is at an all-time high with all government departments affected, while the poor people are facing starvation in the backdrop of rising prices of essential commodities and fuel. (With PTI inputs)