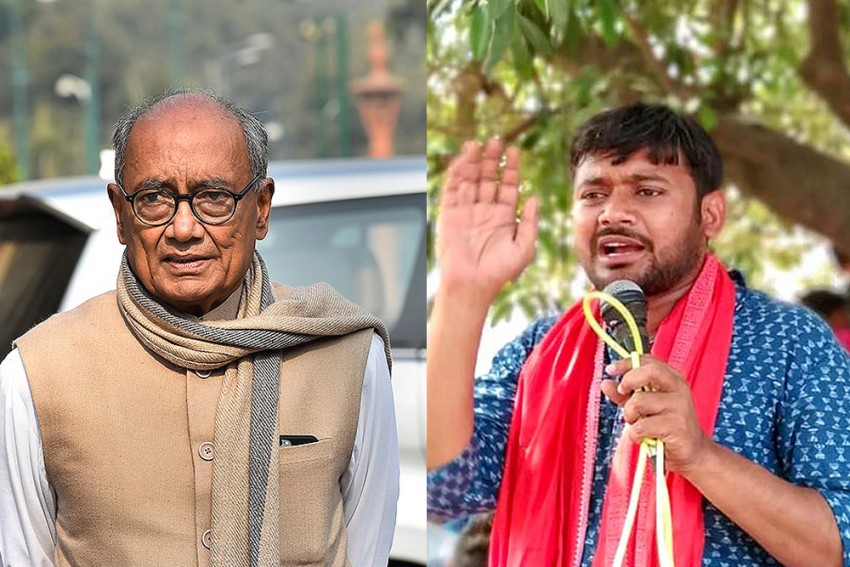 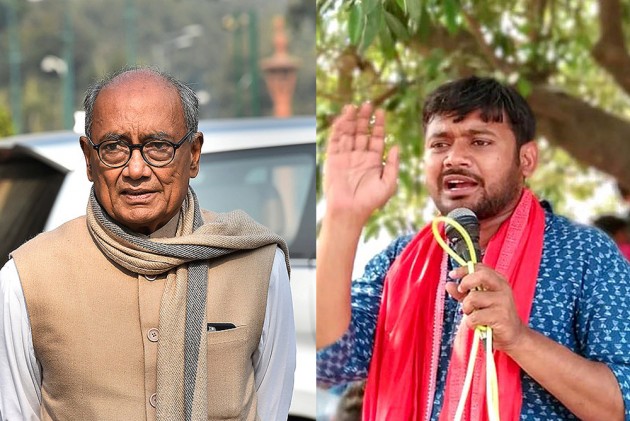 Congress senior leader Digvijaya Singh, who is pitted against Hindutva leader Sadhvi Pragya Singh Thakur of the BJP in the Lok Sabha elections in Bhopal, Madhya Pradesh will get some help in campaigning from CPI contestant from Begusarai in Bihar, Kanhaiya Kumar

Addressing a gathering at the CPI office in Bhopal, Singh called himself an "admirer" of the former JNUSU president, and said that he was happy that Kumar would campaign for him on May 8-9.

It is pertinent to note that the CPI has extended support to Digvijaya on the Bhopal seat after the BJP fielded Pragya Thakur in the seat.

"Fielding Pragya shows the original fascist character of the BJP," CPI state Secretary Arvind Srivastava had said while announcing the decision on April 22.

Singh also sought to dispel perception that Kumar's arrival might rake up "Tukde-Tukde" controversy in the poll season, as Thakur is viewed as a polarising figure.

He blamed the BJP and the RSS for "defaming" Kumar in the 2016 Jawaharlal Nehru University (JNU) sloganeering controversy.

"I am an admirer and a supporter of Kanhaiya Kumar. He has become an ideologue. I openly support him. I told my party that the RJD has made a big mistake (by fielding its candidate in Begusarai). This seat (Begusarai) should have been allotted to the CPI," Singh said.

Kumar is contesting his maiden election against Union minister Giriraj Singh of the BJP in Begusarai.

"I challenge if anybody comes out saying that they (Kanhaiya and his associates) had raised the 'Tukde-Tukde' slogan (on the JNU campus in 2016). It was the work of the BJP and the RSS to defame Kumar and others who are fighting against fundamentalism," he alleged.

Singh claimed that "separation" of the Congress and Left parties was responsible for his party's defeat in 2014 general elections.

"I believe that we (Congress) won again after UPA-I era because the Left was with us, but we got separated on a petty issue. The control over social and economic policies that existed during the UPA-I government (because of Left allies) was missing during the tenure of the UPA-II government, which was the reason for the Congress' defeat (in 2014)," he said.

Singh also took a dig at his political detractors in Madhya Pradesh Congress.

"After the Congress' defeat in the 2003 (assembly polls), it was said that my presence in the state would slash the party's vote share. However, I witnessed that the BJP was winning and the RSS becoming powerful over years whereas the Congress remaining a silent spectator. This is the reason I decided to become active again," the former chief minister said.

He hailed the "help" extended by CPI leaders in defeating the BJP in the assembly elections held last year.

The contest for Bhopal, a BJP bastion since 1989, has become high profile since the saffron party fielded Thakur, an accused in the 2008 Malegaon bomb blast case.

Bhopal goes to polls on May 12 in the sixth phase of ongoing Lok Sabha elections.

Voting for all the 29 Lok Sabha seats in Madhya Pradesh would be held in four phases from April 29 to May 19.