The Union minister said the Centre is promoting women-led development, and the Uttar Pradesh government is taking all those programmes with the same vigour. 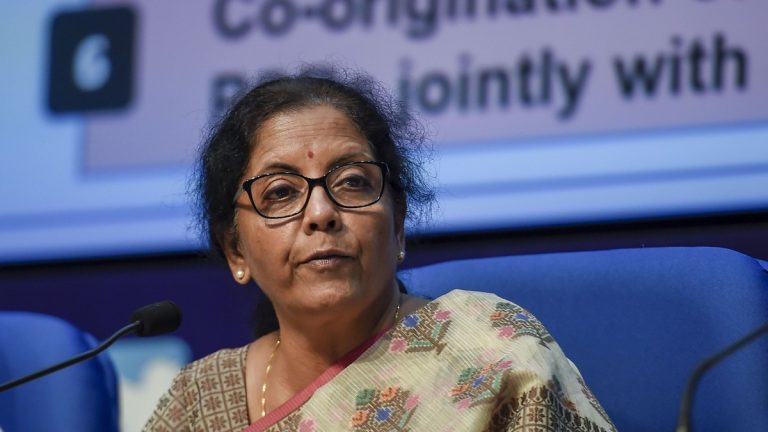 Union Finance Minister Nirmala Sitharaman said on Saturday during the launch of the third phase of 'Mission Shakti' that upon getting  encouragement and opportunity, a woman stops feeling shy, and once she becomes a part of a task, she gives her best,

"And, this is the speciality of women," she said at the Indira Gandhi Pratishthan in Lucknow after the launch of the campaign.

The Union minister said the Centre is promoting women-led development, and the Uttar Pradesh government is taking all those programmes with the same vigour.

Speaking on the occasion, the Union finance minister said, "When I was the defence minister, a small beginning was made to admit girls in the UP Sainik School in Lucknow. This opened up the possibility of getting admission to the National Defence Academy, and subsequently becoming a directly commissioned officer in the Army, Navy, Air Force or the Coast Guard."

Referring to the recent reshuffling of the Union Council of Ministers, Sitharaman said, "More and more women are being inducted as ministers. There are 11 women ministers in the council of ministers."

Speaking about the nationwide vaccination drive, she said, "There are six vaccines available in India, and we are making it in India, while in many developed countries, there are no vaccines. The vaccine which got permission yesterday (Friday) is for children in the age group of 12 and above."

Addressing women self-help groups, the Union minister said, "The central government gives money for storage facilities in villages. I would request all women SHGs to utilise this opportunity and build a storage facility in villages so that things produced locally can be stored there."

Showering praises on Chief Minister Adityanath for his "energy" and "capacity to work", Sitharaman said, "In five years, he would have visited each district of the state at least 10 times. I congratulate him for making women feel safe in the state, for the overall development, and for law and order."

"In the coming days, UP will move with such speed that the role of women will be clearly visible. Your future is bright, and the coming days are absolutely promising and bright with such a chief minister," she added.

The Union minister said UP is the only state where women have been made "bank mitra" and they are posted in every village to render banking services. "This will take the progressive idea ahead," she said.

Addressing the event, Adityanath said "Mission Shakti" will make the state and the country more capable.

"No society, state or country can become capable by ignoring half of its population. This campaign of women empowerment is a part of making the state and the country capable. Today (Saturday) 'Mission Shakti' programme was held in all 75 districts of the state, in which 75 women were honoured," he said.

Referring to the recent panchayat elections in the state, Adityanath said women have become village pradhans and block pramukhs at many places.

He also extended "Rakshabandhan" greetings to all women.

Later, Punjab National Bank MD & CEO S S Mallikarjuna Rao handed over a loan sanction letter of Rs 5,100 crore for implementation of the Ganga Expressway project to the Uttar Pradesh Expressways Industrial Development Authority (UPEIDA) in the presence of Sitharaman and Adityanath at another event.

Speaking on the occasion, Sitharaman said, "I am very proud of the chief minister who understands the larger national interests and translates that into the state's own policies, and takes it to an execution level till the last mile."

Referring to the infrastructure work going on in the state, she said, "That which had to be done in six decades is being attempted to be completed within four-five years. It requires extraordinary commitment and efforts, and that is what the CM is doing. Pleasantly happy that a public sector bank has gone thinking forward."

Combined with the Yamuna Expressway, which connects Greater Noida to Agra, the Ganga Expressway would ensure a high-speed road corridor linking Lucknow to Delhi and the National capital Region (NCR), Nirmala Sitharaman's office said in a tweet.

"The amount of Rs 5,100 crore, under the securitisation process, will be repaid to the bank within a period of 15 years from the toll to be received on the Agra-Lucknow Expressway," it said.

"During this period of loan repayment, the expressway would continue to be owned and operated by UPEIDA," it added.