10 Arrested Over Alleged Molestation Of Students In Delhi's Gargi College

A group of men had broken into the Gargi College during a fest on February 6 and allegedly groped, harassed and molested the attendees. 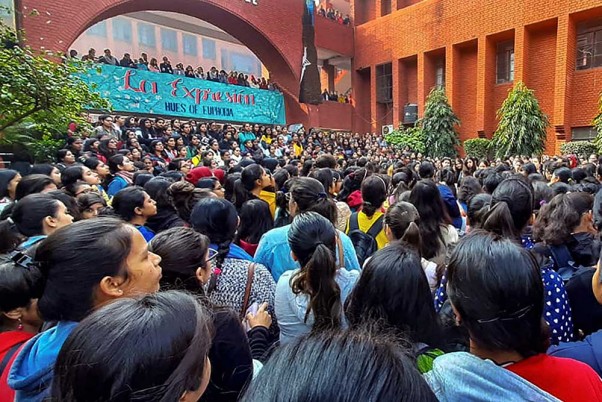 Students stage a protest against the alleged molestation of students by a group of men who had gatecrashed a cultural festival, at Gargi College, in New Delhi.
PTI Photo
IANS February 13, 2020 00:00 IST 10 Arrested Over Alleged Molestation Of Students In Delhi's Gargi College

Ten people were arrested on Wednesday in connection with the alleged molestation of students during a cultural festival at the all-women Gargi College in the national capital last week, police said.

The accused are between 18 and 25 years of age, they added.

Over 11 police teams were looking into the technical details available and also visiting various sites in NCR to identify the suspects and investigate the case, the police said.

Many people are being questioned and multiple suspects have been identified, they added.

According to the police, the accused persons were outside the college when the fest was underway.

A senior police official said the accused are students of various colleges in Delhi and NCR areas. They gathered outside the gate of the college, vandalised a car and then broke in, he added.

Police said the accused jumped over the barricades placed by the college security staff, outnumbered them and then misbehaved with the women students.

Officials said the investigation was on and more people could be arrested.

Students of Gargi College have been boycotting classes, demanding that the fact-finding committee constituted following the incident show its findings.

A case was registered on February 10 at the Hauz Khas police station under IPC sections 452 (House-trespass after preparation for hurt, assault or wrong­ful restraint), 354 (Assault or criminal force to woman with intent to outrage her modesty), 509 (Word, gesture or act intended to insult the modesty of a woman) and 34 (Acts done by several persons in furtherance of common intention).

A group of men had broken into the institute during the 'Riverie' fest on February 6 and allegedly groped, harassed and molested the attendees.

The incident came to light after some students took to Instagram to narrate their ordeal. Students and teachers also posted on other social media websites about the incident.

Over 100 students held a protest on February 10 outside Gargi College.

The students had alleged that Rapid Action Force and Delhi Police personnel were deployed close to the gate from where the men entered.