Home  »  Website  »  National  » News Analysis  »  With A Silent KCR And Optimistic Congress, Is Telangana Heading For A Cliffhanger?

With A Silent KCR And Optimistic Congress, Is Telangana Heading For A Cliffhanger?

Quite unlike him, KCR has switched to silent mode and has been monitoring the situation from his farm house, which is in his constituency of Gajwel. While, the ‘Praja Kutami’ spearheaded by the Congress, consisting of TDP, TJS and the CPI, appears confident of a win. 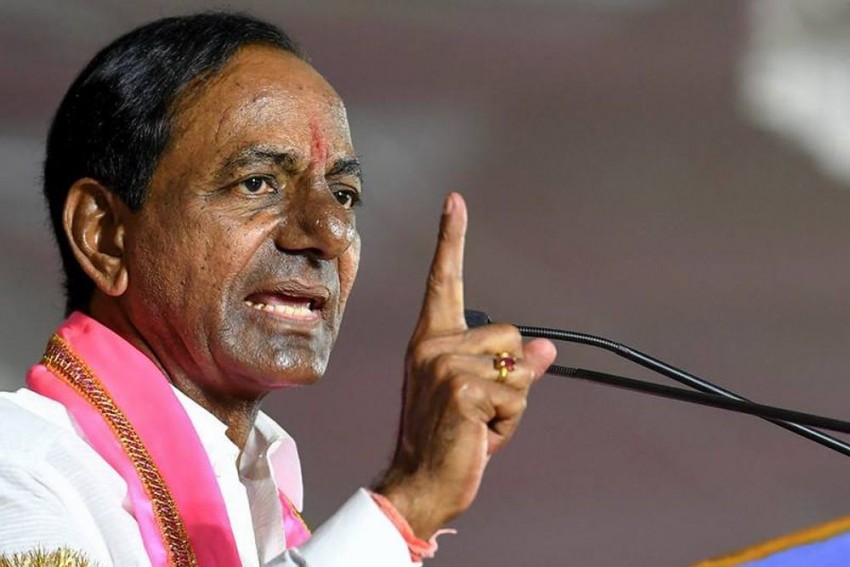 With Assembly election results a day away, Telangana politics is is more interesting than ever.
PTI Photo
M.S. Shanker December 10, 2018 00:00 IST With A Silent KCR And Optimistic Congress, Is Telangana Heading For A Cliffhanger? 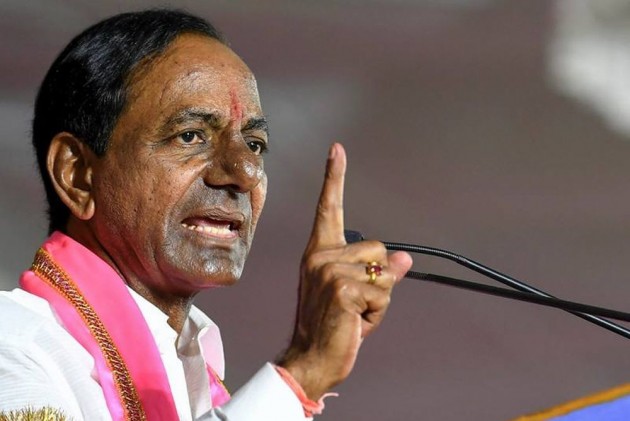 In his press conference after dissolving the assembly prematurely on September 6, Telangana Rashtra Samiti (TRS) chief K Chandrasekhar Rao had said that his party would win 100 out of 119 seats in the assembly elections.

However, KCR’s optimism has turned into pessimism after December 7.

Quite unlike him, KCR has switched to silent mode and has been monitoring the situation from his farm house, which is in his constituency of Gajwel. Many wonder what has forced him to go into the huddle at his farm house and refusal to hold a press briefing. Is it an indication of a calm before the storm?

Meanwhile, the ‘Praja Kutami’ spearheaded by the Congress, consisting of the Telugu Desam Party (TDP), the Telangana Jana Samiti (TJS) and the CPI, appears confident of a win. However, their camp too has misgivings about their victory.

The Pradesh Congress chief Uttam Kumar Reddy feels the time has come for him to go for a ‘shave’ no sooner the results are out. Reddy, a pilot-turned-politician, had vowed not to shave his beard until he ensures the end of the 'corrupt and family rule' of KCR in Telangana.

Reddy, who succeeded in convincing the UPA chairperson Sonia Gandhi to address a rally at Medchal, seems confident of his party’s victory. He claims Sonia Gandhi’s rally gave a boost to party cadres to work in tandem with the alliance partners to return to power. “Believe me. It’s Sonia Gandhi’s single meeting that had sent shivers down the spines of both father and son in the TRS party, who were forced to concede the defeat even before the battle begun,” he told Outlook.

Reddy has reasons to be confident. TRS MP Konda Vishweshwar Reddy from Chevella constituency switched sides few days before the polls. Apart from him, several other TRS party functionaries across the state have also joined Congress ranks, sending panic buttons among the ruling party.

Reddy’s reason for leaving TRS, which may cost the party dear, was the leadership, especially KCR’s son K Tarakarama Rao (KTR). He said the TRS has started working against the people. He said the party has become a single person authoritarian rule.

However, few Congress leaders feel that the TDP has turned out to be a liability. Their doubts are borne out of the fear that ‘vote transfer’ had not taken place as expected in favour of the Congress, which fielded its candidates in 94 of the 119 constituencies, leaving 14 to TDP, nine to TJS and three to CPI.

A senior Congress leader on condition of anonymity said, “TDP has turned out to be a liability than an asset to the party’s ambitious plans to send TRS headed by KCR and his family packing.”

“I have my own doubts over my party’s victory as I could see some anger among hardcore party workers against the leadership decision to join hands with anti-Telangana party like the TDP,” he said.

According to him, the TRS leadership succeeded in painting the TDP president and Andhra Pradesh Chief Minister Nara Chandrababu Naidu as the 'real villain' who tried to stall several irrigation projects initiated by their government by writing letters to the Centre.

Will the formation of the Mahagathbandhan turn out to be a ‘missed opportunity’ with far reaching consequences for the alliance at both the local and national level? Some senior Congress leaders, including those who were either denied tickets or were not part of the decision-making process, express their displeasure over the possibility of the party missing the bus, yet again.”

Instead of KCR, his son KTR along with seniors held press conference and reposed confidence in sweeping the polls due to an effective and efficient delivery of welfare schemes.

Should the TRS sweep the polls, which is quite unlikely according to exit polls predictions, KCR and TRS will be on cloud nine.

If the TRS manages to scrape through with a simple majority, then too KCR will claim it to be a victory of the people to impose confidence in the TRS policies. In case there is a hung assembly, with the TRS emerging as the single largest party, then KCR is bound to first seek alliance with the AIMIM.

However, the eerie silence by KCR appears to have dampened the spirit of enthusiastic party workers. Several senior ruling party leaders too do not appear confident of their hitherto claims of ‘landslide victory'. Not expressing much confidence over the exit polls predictions, they await the outcome with their ‘fingers crossed’.

“We are confident of coming back to power. People have voted for us enthusiastically as we delivered on most of our promises. Unlike the ‘unholy’ alliance led by the Congress which spreads lies to grab power with their ill-found confidence to come to power, we trust our voters who wanted KCR government to return to power and do more good work,” claims a senior TRS functionary. “Sometimes stoic silence also proves an effective answer,” was his response when asked what is holding back their leader KCR from holding a press conference.

What may be worrying for both the ruling TRS as well as the Congress-led Praja Kutami is an increase in voter turnout in as many as 70-80 constituencies, where the average touched close to 80 per cent.

Political analysts feel that an increase in voting percentage is a worrying factor for the ruling party and has, on many occasions, proved advantageous for the Opposition.

Will that perception change in India’s youngest state?

Even KTR's follow-up briefing after claiming to sweep the polls in the first press conference has changed and mellowed down.

With fear of loss looming large and a visible strong anti-incumbency wave against the TRS, the Congress-led alliance may have an edge. Many political analysts expect the electorate to deliver a fractured verdict.

What if the Congress-led alliance manages to get 50-55 seats and emerges as the single largest group, leaving the TRS far behind with just 30-35 seats? Or, what if the TRS wins 40-45 seats and stakes claim for government formation? Which party will the Governor invite to form the government?

The AIMIM, confident of retaining its traditional 7 seats in the old city of Hyderabad and been identified with the TRS, may get an opportunity to play the role of the kingmaker. Will it stick to its past relationship with the TRS and help KCR to cobble their arch-rivals BJP and few independents? Or will AIMIM choose to switch its loyalty towards its old ally Congress?

Interestingly, pollsters, who initially thought that the BJP may not retain its own 5 seats, are now projecting the saffron party’s possibility of winning as many as 8-10 seats.

With such permutations and combinations, the ‘cliff-hanger’ results promises to be an interesting development in political circles. Possible questions that are likely to be raised are: “Who is the Governor likely to invite for government formation? Will it be a Goa-kind situation, if  Governor opts to invite TRS, even though it falls short of the Praja Kutami’s total figure?

Till then, all eyes are on tomorrow’s results.