US Elections: 'The president will accept the results of a free and fair election. He will accept the will of the American people, said White House Press Secretary Kayleigh McEnany. 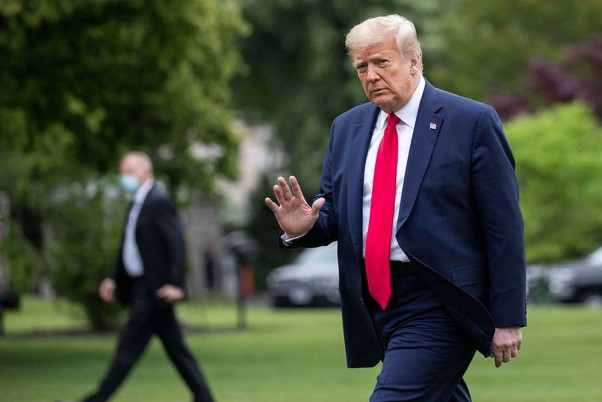 US President Donald Trump will accept the results of the election if it is free and fair, his press secretary said on Thursday, amidst a raging controversy on the president not committing himself to a peaceful transition of power in the case of a defeat in the November 3 polls.

"The president will accept the results of a free and fair election. But I think that your question is more fitting to be asked of Democrats, who have already been on the record saying they will not accept the results of an election," White House Press Secretary Kayleigh McEnany told reporters at her news conference.

US Elections: Third Parties Could Play A Lesser Role

"I believe that question asked by the Playboy reporter -- in fact, I think have it right here -- he (Trump) was asked win, lose or draw, whether he would accept the transfer of power. I am not entirely sure if he won, why would he accept a transfer of power. That is maybe the deranged wish of that reporter, but that is not how governing works," McEnany said.

She referred to several comments made by the Democrats in the past, apparently questioning the validity of an election.

"The Washington Post has noted -- they have a headline -- 'Democrats may not trust the results of the election if Trump wins'. And then you have that beautiful quote from Hillary Clinton that Joe Biden should not concede under any circumstance," she said, adding that this is more a fitting question for the Democrats.

The president, she said wants to get rid of the mass mail-out voting and that is not because..."he has said clearly that that could go either way. It could damage either candidate's chances because it is a system that is subject to fraud".

"In fact, in the last 24 hours, police in Greenville, Wisconsin found mail in a ditch and it included absentee ballots. And also, I can confirm for you that Trump ballots, ballots for the president, were found in Pennsylvania. And I believe you should be getting more information on that shortly. Here in the last 24 hours, they were found cast aside.

"The president has always made the distinction that absentee ballots, where you go through a process, where you request a ballot and you mail that in, that is a system that works," the press secretary said.

"But a system where you mass mail out to voter rolls, which are not kept and maintained, where in Los Angeles County, for instance, you have 120 per cent of the county enrolled, that system is untenable. It does not work. It leads to what we saw in Nevada, where there were ballots languishing in trash cans and pinned to apartment boards," she added.