The protesters from across this city gathered at the UN headquarters on Sunday, holding placards and raising slogans against the terror machinery operating on Pakistani soil and demanded swift action against the JeM and its leader Masood Azhar. 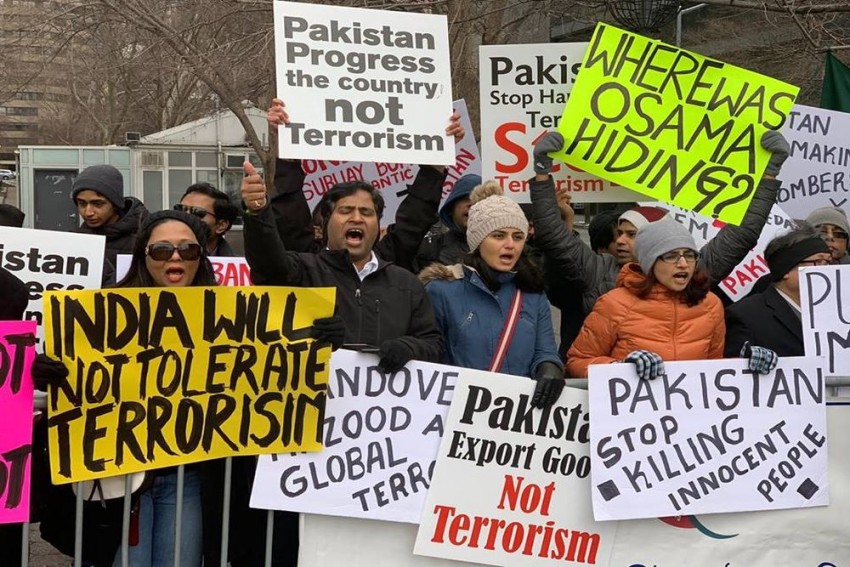 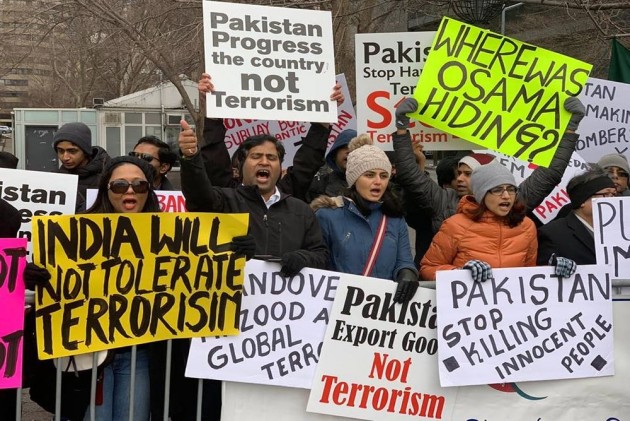 Demanding that Pakistan take action against terror groups operating on its soil, a large number of Indian-Americans, braving wintery weather, held a protest in front of the United Nations headquarters in New York against the Pulwama attack.

On February 14, a terrorist of the Pakistan-based Jaish-e-Mohammed (JeM) rammed an explosive-laden vehicle into a bus in Jammu and Kashmir's Pulwama district, killing 40 Central Reserve Police Force (CRPF) personnel.

The protesters from across this city gathered at the UN headquarters on Sunday, holding placards and raising slogans against the terror machinery operating on Pakistani soil and demanded swift action against the JeM and its leader Masood Azhar.

Jagdish Sewhani, President of 'The American India Public Affairs Committee' and one of the organisers of the event, told PTI that Indian-Americans, including professionals and students, were expressing their anger at the "continued state sponsorship of terrorism by Pakistan across the world".

The protestors raised slogans against all major terrorist attacks originating from Pakistan such as the 2008 Mumbai 26/11 attack, the Uri attack and the 2001 Indian Parliament attack among others.

"Pakistan is still shielding terrorists and is refusing to crack down on them. The Pakistan Army continues to support terrorist outfits such as al-Qaeda, Lakshar-e-Taiba, Jaish-e-Mohammed, Haqqani network," he said, adding that "time has come to give a befitting reply to Pakistan in a language it understands".

"We are demanding that the perpetrators of the attack should be brought to justice and the terror infrastructure based in Pakistan has to be dismantled," he said, adding that JeM chief Azhar should be handed over to India to face a trial.

"We are protesting Pakistan's cross-border terrorism in India and Afghanistan and sponsorship of global terrorism that has affected many countries around the world," Anugula said.

Several people from other South Asian nations such as Afghanistan, Bangladesh and Nepal also joined the protest.

Richard Benkin, a Jewish-American at the protest, said the international community stood in solidarity with India, noting that Pakistan's support for terrorism will not go unquestioned any longer.

Protestors also spoke about the high casualties resulting from terrorism supported and launched from the Pakistani soil. They demanded that the UN make Pakistan accountable for the Pulwama, Mumbai and other terror attacks.

The protesting organisations also plan to send a memorandum of their demands to UN Secretary General Antonio Guterres.

Pramod Bhagat, President of India World Foundation USA, said that there was a need to reach out to the US lawmakers.

One Who Solves Kashmir Dispute Would Be Worthy Of Nobel, Not Me: Imran Khan