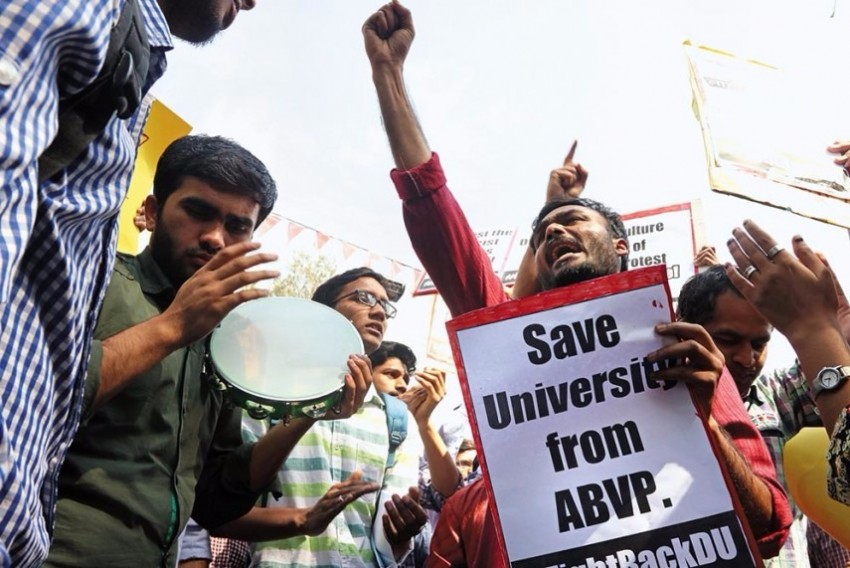 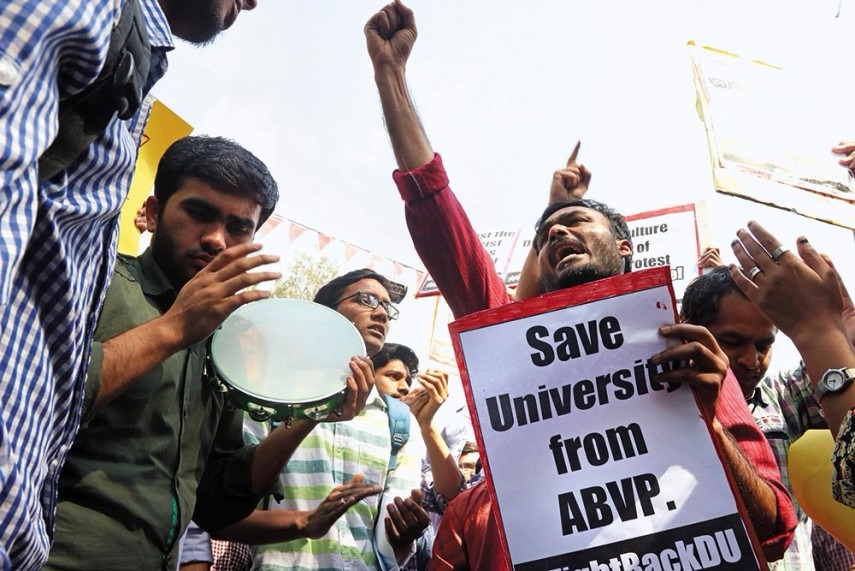 For a varsity that is known as the “Leningrad on Yamuna” because of its strong allegiance to the Left-wing politics, the poll-result might not be heartening. The rise of the Akhil Bharatiya Vidyarthi Parishad (ABVP), affiliated to Rashtriya Swayamsevak Sangh (RSS), is something that cannot be ignored and could pose a serious challenge to the Left-leaning student organisations in the coming days.

JNU, one of the few varsities in the country that still keeps Left politics alive, has witnessed a gradual increase in the saffron vote share in the last two elections.

In a campus that has been the breeding ground of Communist leaders such as Sitaram Yechury and Prakash Karat, the year 2015 marked a shift as far as students’ politics is concerned. Before this juncture, the varsity never saw the saffron forces as a threat to its Socialist-Communist ideals. The fight mostly used to remain confined among various Left organisations that were torn on certain ideological grounds, but agreed on core values.

The 2015-16 elections that brought to the central panel its controversial president Kanhaiya Kumar from the All India Students’ Federation (AISF), the trend had already taken its roots.  The All India Students’ Association (AISA) — the organisation that had been sweeping the elections as the varsity resumed students’ body election after a hiatus of three years following the contention over Lyngdoh panel recommendations —lost the top post to the AISF.

Although, AISF’s Kanhaiya Kumar won the presidential post with 1029 votes of total 4372 polled votes, the real catch was the close call between the candidates on second and third positions —AISA’s Vijay Kumar won 962 votes, while ABVP Gaurav Kumar Jha settled for a close 924 votes. And the CPI(M)’s student- wing Students Federation of India (SFI) had to make do with a meager 549 votes. For the presidential post, the ABVP managed to garner 28% of the total votes — lagging just 1% behind the AISA (28%). AISF’s Kanhaiya got 30% votes, whereas the conventional SFI scored 16%.

The ABVP grabbed eyeballs with its unforeseen performance at all the three other seats by coming second. Most baffling was the win of saffron party on a central panel position. Breaking the jinx of 14 long years, Saurabh Kumar Sharma became the joint secretary. In the history of JNU students’ politics, this was the second time when any member of the ABVP had been elected for the position. The last time an ABVP candidate won a panel post was in December 2000, when Sandeep Mahapatra was elected as president.

The tenure, however, turned out to be a turbulent one. Marred with various protests, JNU made headlines around the clock -- from being branded as “anti-national” to becoming a hub of protests that would forever be remembered in the history of students politics in India. The 2016 JNU protests brought the Left together, but also led to polarisation.

Aforementioned, the gradual increase in the vote share of the ABVP is said to have been the thread that brought together the otherwise combatant Left parties together in a political “mahagathbandhan”.

In the meantime, the campus also witnessed the rise of other popular party such as Birsa Ambekar Phule Students’ Association (BAPSA), which further diluted the vote-bank for the Left. Riding on the wave of “caste oppression”, the BAPSA ventured into the electoral politics last year, giving a tough fight to the popular AISA-SFI United Front. In 2016 elections, the Left Unity — AISA and SFI — came into being. The objective was one- to keep the saffron forces out and reinstate the Left identity. The AISF, however, has never been a part of any such alliance and always fought the elections alone since 2013 -- the year they stepped into electoral politics in the campus. As the chart shows, this year again the ABVP startled everyone with its unexpected arrival at the second spot at almost all the positions. Evidently, the fight has, now, broadened and the ABVP has finally arrived in the scene.

The Left Unity, this year, reinstated its strength by winning 41% of the casted votes for the post president. Certainly, the newly formed BAPSA was able to dig into the red votes by getting a 33% vote share, while the ABVP almost retained its vote-bank by getting 23% votes.

When we look at the vote shares of this year’s election (2017-18), we observe that the trend has remained the same. In order to get a consolidated mandate to the Left Unity, another break-away faction -- the Democratic Students’ Federation (DSF) -- had too joined the coalition. While Left Unity’s Geeta Kumari won the seat with 1506 votes, ABVP’s Nidhi Tripathi managed to put up a fairly decent fight at the second position with a total of 1042 votes.

A closer look at the percentage shows how despite coming together, the Left Unity (AISA+SFI+DSF) did manage to get only 39% of votes for the presidential position as compared to last year’s 41%. Whereas, the vote share of the ABVP has risen from last year’s 23% to 27% this year. The ABVP, in recent elections, has emerged as a strong contender by gaining majority in small centres such the Science Schools, Sanskrit Schools and other special centers, while the Left has still managed to keep the School of Social Science in pace with its ethos.

Though, the campus still can be called a red bastion, the trends mark a serious threat to the communist parties. The Left Unity might have won the elections, but the longer fight remains.