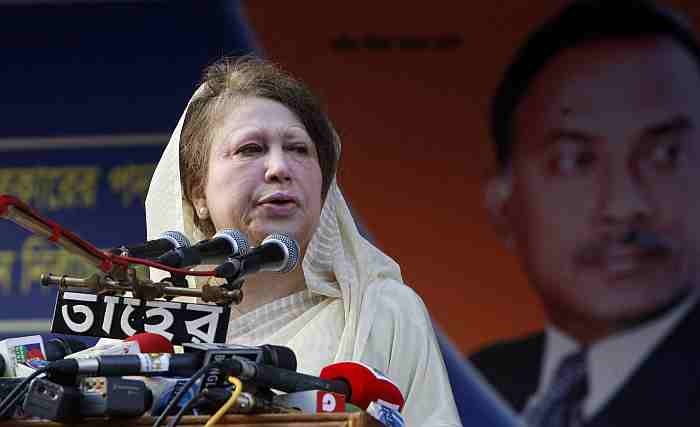 Bangladesh today tightened security amid mounting tensions over an impending corruption trial verdict against ex-prime minister and main opposition BNP chief Khaleda Zia tomorrow that may disqualify her from contesting the next general election.

Elite Rapid Action Battalion (RAB) and armed police were called out to guard Dhaka streets while Prime Minister Sheikh Hasina's ruling Awami League said their activists would be ready to "assist police" if the BNP tried to foment any unrest over the verdict.

According to media reports, police in the past several days arrested over 1,000 BNP activists, including some senior leaders, suspecting they could spearhead a violent campaign if Zia is convicted.

A Dhaka court is set to deliver the judgment in the trial in which Zia, 72, and five others, including her expatriate elder son Tarique Rahman, stand accused of embezzling 21 million takas (USD 252,000) in foreign donations meant for the Zia Orphanage Trust.

Legal experts said Zia, who served as premier for three terms, could face life imprisonment if found guilty of the charges while a conviction would simultaneously disqualify her from contesting the next general election slated for December.

Her party had boycotted the 2014 polls over its demands for an election-time non-party government, and became the opposition outside parliament. But it is expected to contest the upcoming polls.

Political analysts said the BNP might see a political split as several senior leaders could disassociate themselves from Zia as her son Rahman, the senior vice president of the party, is seen as wielding authority from London while ignoring party veterans.

Rahman is believed to have sought asylum in Britain to evade justice as he is also being tried on several charges, including a 2004 grenade attack on a rally of the then opposition Awami League that killed 23 people and in which Hasina narrowly escaped.

Zia, in a meeting of the party's highest policy making national executive committee last week, warned of severe consequences against any attempt of "betrayal" saying she would remain with the party whatever the court verdict.

The main opposition party, which claims the charges are part of a plot to keep its leader out of the general election, has threatened to take to the streets if she is convicted.

The ruling Awami League, however, has denied it saying if Zia is not guilty, then it will be proven in court.

It has also called on its supporters to be vigilant if the BNP launches protests.

"Please don't do something foolish that can put the party in danger. Remain united," she said last week.