Pakistan reached 160-5 at stumps with Babar Azam batting on 54, while Faheem Ashraf batting on 12 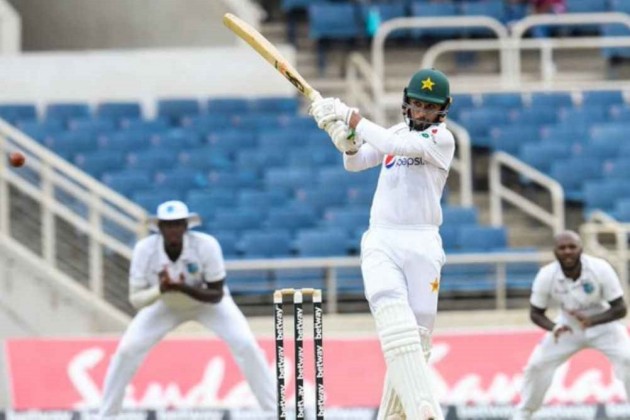 An unbeaten half-century by captain Babar Azam helped Pakistan to a 124-run lead over the West Indies with five second-innings wickets in hand at stumps on a rain-affected third day of the first cricket test. Highlights | News

Trailing by 36 runs on the first innings, Pakistan reached 160-5 by stumps with Babar 54 not out and Faheem Ashraf on 12.

Two hours play was lost on either side of the scheduled tea break leaving Azam, who was 28 when the rain began, to bat through an extended final session.

He built a threatening fifth-wicket partnership with Mohammad Rizwan, which was worth 56 when it was broken by Jason Holder with a superb leg-cutter which had Rizwan caught behind.

Pakistan led by only 85 runs at that point and the West Indies held the upper hand. But Babar and Faheem batted out the rest of the day in a patient partnership which had added 39 by stumps, drawn in gloomy conditions with the lights on and spinners operating.

Babar's half-century came from 117 balls and Faheem showed great application in facing 79 deliveries for his 12 runs.

But the West Indies allowed a vital chance to slip through their fingers when Faheem, on 4, was dropped by Jermaine Blackwood at third slip from Kyle Mayers' bowling. Mayers had just gone around the wicket when Faheem edged into the slip cordon but Blackwood couldn't the catch which was low and to his right.

The Sabina Park pitch is still favoring fast bowlers and a lead of more than 200 might he hard to chase down.

“On a pitch that is pretty tough I think we are are in good stead in the game, five wickets from bowling them out,” said West Indies paceman Kemar Roach, who finished the day with 2-15 from 15 overs.

“Tomorrow the first hour is very crucial, if we go out there and put the ball in the right place, which we did for the final two sessions. I think we were remarkably consistent and that's what limited Pakistan on a very tough day for batting.”

Pakistan began the day by quickly wrapping up the West Indies first innings. The home team resumed at 251-8 and added only two more runs before the innings ended, with both wickets going to Shaheen Afridi.

Pakistan lost opener Imran Butt in the third over, with only one run on the board, but was steadied by Azhar Ali (23) who put on 55 for the second wicket with Abid Ali.

The tourists stumbled again when both Abid and Fawad Alam were both out in the 26th over with the total 65, a lead of just 29. Both fell to the young paceman Jayden Seales.

Abid, on 34, stepped back to cut a sharply-rising ball which took a top edge and flew to Holder at second slip. Fawad lasted only three balls before a delivery from Seales which straightened on off stump caught him in two minds and provided a catch to wicketkeeper Joshua Da Silva.