These Are The Men To Rule Indian Cricket: Former India Captain Sourav Ganguly Unveils New Team BCCI - Know Them All

Former India captain Sourav Ganguly will lead a team of fresh faces as the BCCI gets ready to take the power back from the Committee of Administrators, which was constituted by the Supreme Court to run the sport after the IPL scandal 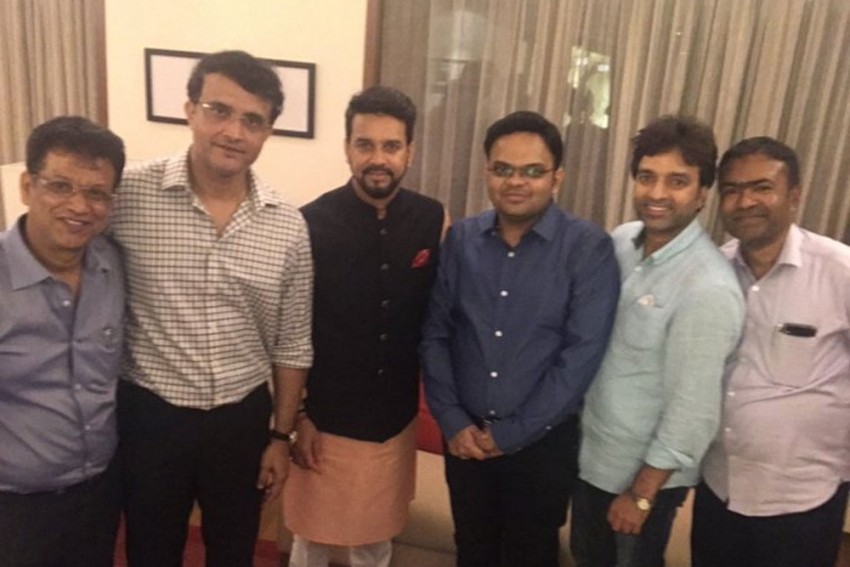 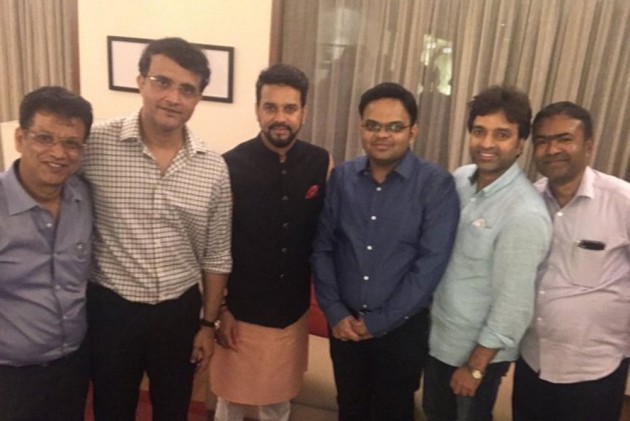 After filing his nomination for the president's post of the Board of Control for Cricket in India (BCCI), legendary Indian captain Sourav Ganguly unveiled his new team early Tuesday morning.

Read: Ganguly In For A Shock, Leaves Nomination Paper To Legal Team

Besides Ganguly, who is currently the president of the Cricket Association of Bengal (CAB) since 2015, will be joined by Brijesh Patel, Jay Shah, Arun Dhumal and Jayesh George in the new regime. The new faces will officially take control of the BCCI when the Supreme Court-constituted Committee of Administrators (CoA) hand over power to the office-bearers on October 23.

The new team at. @bcci .. hopefully we can work well .. anurag thakur thank you for seeing this through âÂÂÂÂ¦@ianuragthakurâÂÂÂÂ© pic.twitter.com/xvZyiczcGq

Here's a look at five men who will run the show at the world's richest and most powerful cricket body:

Sourav Ganguly (President): He's a man for all seasons, and commands respect from everyone. In fact, that's probably the reason why every power broker in Indian cricket is endorsing him as the new boss of an insanely lucrative and powerful organisation which is dear to every Indian. Having laid the foundation for a strong national team with his aggressive leadership, the Pince of Calcutta joined cricket administration, succeeding peerless Jagmohan Dalmiya as the president of CAB. That's where his new innings started. And one would argue that the former India captain learned the 'craft' from his late father, Chandidas Ganguly, who was an influential figure in the 70s, serving CAB at various capacities after starting as assistant secretary. He later became treasurer, secretary, vice-president and a member of the trustee board. Also, Dalmiya had a massive influence on Ganguly's career, both as a player and an administrator. Dada has more than one legacy to keep alive.

Jay Shah (Secretary): He has been the joint secretary of the Gujarat Cricket Association since 2013. And he is the one to look out for, for reasons everybody knows. As of now, he is known as the son of Union home minister and Bhartiya Janata Party leader Amit Shah. If that's not enough, Jay has shown the hunger for power and the corridors of BCCI may well prove just the perfect setting to establish his own legacy. Not many would dare his stand. Jay will be directly involved in almost every decision taken by the board. He is young, but carries a lot of weight when he makes a move.

Arun Singh Dhamal (Treasurer): His elder brother Anurag Thakur is the former BCCI chief and current MoS, Finance in the Narendra Modi government. He appeared in the scene suddenly, becoming the head of the Himachal Pradesh Cricket Association last month. Such impeccable timing can only be executed by a family that has run the state association for over a decade. It's only natural that while the elder sibling is playing a larger role, the younger one takes up the mettle of continuing the family legacy. Only in this case, it's of national importance, touching the lives of thousands of cricketers, directly or indirectly. Consider this too: Anurag Thakur facilitated the formation of the new regime, as publicly admitted by Ganguly. Arun is here to stay.

Brijesh Patel (IPL Chairman): He is the most experienced administrator in the newly installed administration. He was also the first choice to become the president but Ganguly pipped him, despite having the blessings of former BCCI boss N Srinivasan. Meaning, he became the sacrificial goat in the larger game as all the stakeholders try to present a united front against the CoA. Take the example of Srinivasan. But the former Indian batsman will have a key position, that of the chairman of the Indian Premier League (IPL) -- BCCI's money-minting machine. However nominal the position may sound, the chairman will have plenty to do. IPL is not just a tournament, it's a yearly carnival the world has never seen before.

Jayesh George (Joint-Secretary): The president of the Kerala Cricket Association will play a key role in the new set-up. After all, he has the backing of Ganguly himself. Like the President-elect, he was not in the picture until Sunday. Then suddenly became a viable candidate for the joint-secretary post with Jay Shah endorsing his name, instead of Assam's Devajit Saikia, who was previously touted to join the new administration. According to reports, Jayesh even filed his nomination on Monday with former India captain and newly elected Hyderabad Cricket Association president Mohammad Azharuddin proposing him.

All five of them will relinquish their current positions at state associations before formally taking over their respective roles in the BCCI.