Chanu atoned herself for 2016 Rio debacle, while Indian shooters, archers and boxers disappointed. Catch the highlights and updates of Indians competing on day 2 of Tokyo 2020.

Saikhom Mirabai Chanu will be the toast of the nation tonight.  Chanu, on Saturday, ended India's 21-year wait for a weightlifting medal at the Olympics. Her silver in the 49kg category at the Tokyo Games was a redemption for the 2016 Rio Olympic debacle. India faced disappointment everywhere else. In the morning archery mixed team of Deepika Kumari and Pravin Jadhav crashed out of the quarterfinals, while  shooting medal hopes Elavenil Valarivan and Apurvi Chandela failed to make the final in the women's 10m air rifle event. Saurabh Chaudhary finished a lowly seventh in the men's 10m air pistol final. Indian men's did managed a strong start in hockey defeating New Zealand 3-2, but the women's team was outclassed by Netherlands 1-5. In boxing Vikas Krishan was ousted in the opening round itself. For India  the only silver lining came  in the form of weightlifter Saikhom Mirabai Chanu, who won India's first medal. Follow the highlights of Day 2 here:

So that's it. India have lost to a better side, in fact the No 1 side in women hockey. Not an ideal start for Indian women's team apart from the first quarter goal by skipper Rani. 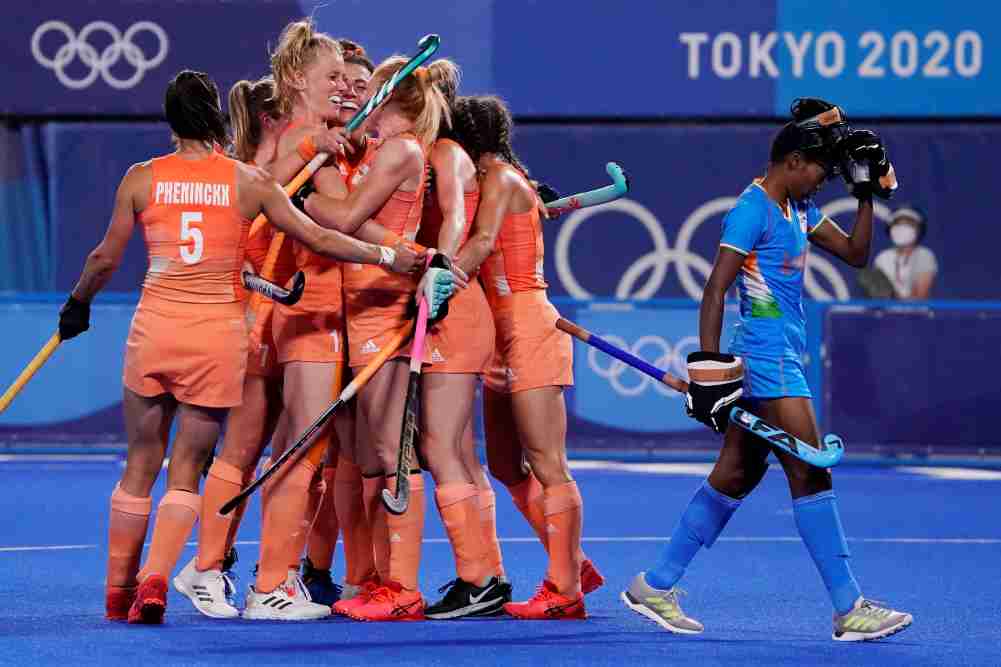 Netherlands celebrate after scoring against India during a women's hockey match at the 2020 Summer Olympics on Saturday, July 24, 2021.  Photo: AP Photo/John Locher

GOAL!!! Netherlands have scored again in the last minute of the 3rd quarter to stamp their class. India now have 15 minutes of last quarter to try and make a comeback. It was supposed to be tough match and India managed to hold their own for 30-40 min but the last few min of the third quarter, Indian women conceded two goals.

GOAL!!! Netherlands have scored again, India in all sorts of trouble.

India are holding their own against the mighty Netherlands. A goalless 2nd quarter and India did manage to stitch a few counter attacks and keep Dutch on their toes. Two more quarters to go

Captain Rani inspired a comeback and India have managed to hold on against the mighty Netherlands.

GOAL!!! India have equalised (1-1) in the 10th min of the match. Captain Rani scores the goal

India women hockey in traditional blue outfit are up against Netherlands in the opener. The match is about to start shortly, stay tuned for updates

Meanwhile in TENNIS, Novak Djokovic beat Hugo Dellien 6-2, 6-2, to start his bid for the Golden Slam

Hosts Japan's Quincy Okazawa defeats Vikas Krishan 5-0. Bad start for India in boxing. Krishan was one of the most experinced boxer in the contingent and was completely outplayed.  Read the detailed reort HERE.

Quincy Okazawa vs Vikas Krishan 2nd round: The bout has been stopped as Krishan is bleeding through a cut over left eye. Okazawa extends his dominance takes round 2 too

Quincy Okazawa vs Vikas Krishan 1st round: Both boxers were equally matched. a good bout wherein both are trying to test each other weaknesses. Okazawa takes round 1, a unanimous decision

4:06 PM IST: Vikas Krishan is in his third Olympics and perhaps the most experienced boxer in Indian contingent for the Tokyo

Tonaki Funa lost to Kosovo's Distria Krasniqi in the women's judo 48 kg. Bronze went to Daria Bilodid of Ukraine and and Urantsetseg Munkhbat of Mongolia. 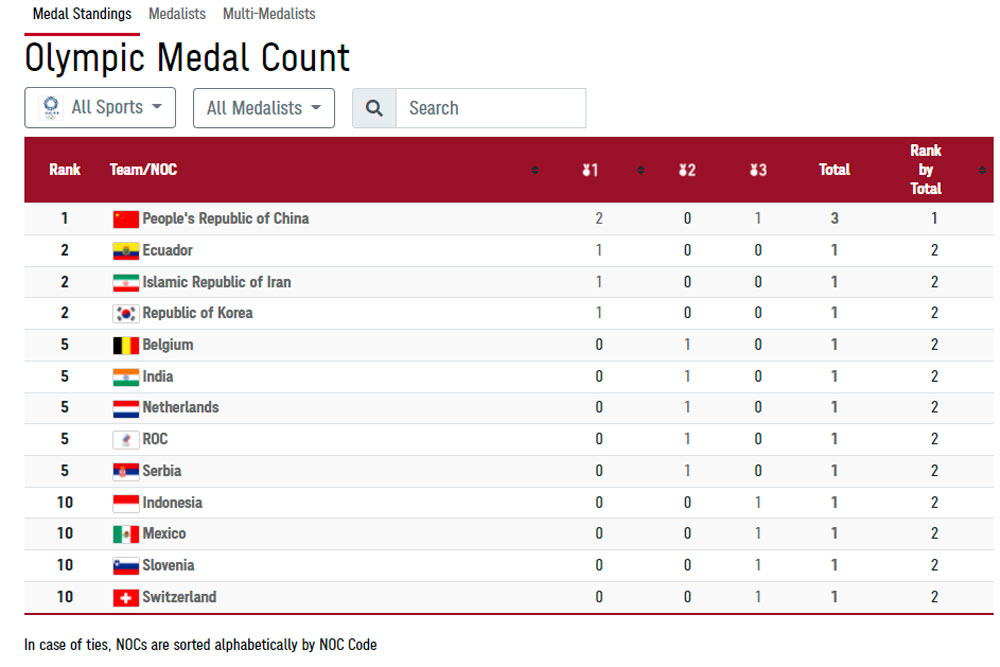 Three matches are currently on. Chile vs Canada, China vs Zambia and Sweden vs Australia.

Serbian great Novak Djokovic enters second round with a 6-2, 6-2 win over Dellien Hugo of Bolivia.

Indian eves start their campaign with a clash against the Dutch.

12:35 PM IST: In other results, Indian shuttler B Sai Praneet lost to Zilberman Misha in straight games (17-21, 15-21) in their men's singles group match. But men's doubles pair, Satwiksairaj Rankireddy and Chirag Shetty beat Lee Yang and Wang Chi-Lin of Chinese Taipei in a group match. They won 21-16, 16-21, 27-25 in a thriller.

Saurabh Chaudhary is all set for the final showdown.

Mirabai goes for 117 kg in her final attempt. And she fails, and settles for silver with a combined lift of 202.

Hou Zhihui goes for 114kg in her second attempt. And she's clean. Already new Olympic record with a total of 208 kg.

China's Hou Zhihui on with 109kg in her first attempt.

Still with 108kg. USA's Delacruz fails again in her third attempt, with no lift in clean & jerk.

Chinese Taipei's Fang Wang-Ling lifts 101kg. But Belgium's Nina Stercks fails in her attempt. Her best remains 99 and her total is 180.

France's Anais Michel lifts 101 kg in her second attempt. But Japan's Hiromi Miyake fails in 99kg attempt again. And she goes for the final attempt within the stipulated two minutes. Another failure and he has no lift in clean & jerk.

Chinese Taipei's Fang Wan-Ling increases the weight to 98kg, and she lifts. Mirabai is the world record holder (119 kg)

France's Anais Michel starts with a 96 kg. And successful.

Deepika Kumar and Pravin Jadhav win the third set to keep their hopes alive. But Kim Je Deok and An San seal it the deal 36-33.

Now the final lift in snatch. China's Hou Zhihui goes for 94 kg, which is 2 kg less than her own world record. And she lifts it. And new Olympic record.

She enters clean and jerks with seven kg lead.

China's Hou Zhihui lifts 92 kg in her second attempt. She is the lone lifter left now.

American camp challenges the verdict, but nothing. Mirabai goes for 89kg and her best in snatch remains, 87 kg.

USA's Delacruz tries for 89kg in the third attempt. And she lifts it. No, it's a fault lift. Her best lift remains 86.

Mirabai goes for 87kg in her second attempt. And clean, it is.

Nina Stercks fails her 84kg attempt. USA's Delacruz goes for 86kg. And she lifts it.

Not easy, but Mirabai clears it.

Indonesia's Windy Cantika Aisah first to have a crack at 84 kg. And she fails. Next is Mirabai, with her first attempt.

Saurabh Chaudhary wins the qualifiers with 586. He will be joined by other seven shooters, but not Abhishek Verma, who finished 17th with 575.

Chinese Taipei's Fang Wan-Ling now goes for 80 kg and she is happy. Mirabai will start with 84 kg. She still has some time to join the fray.

Saurabh Chaudhary maintains lead after the sixth series. He has 586 points, with an average of 9.767. Abhishek Verma now sixth with 531.

Stage is set. Each lifter will get three chances in each weight attempt in snatch and clean & jerk. The combined total decides the winner.

Steady for Saurabh Chaudhary. He moves to fourth after fourth series with 301. Abhishek Verma struggling at 23rd with 171  after second series.

Saurabh Chaudhary off to nervy start. Seventh after second series with 241 points. Abhishek Verma languishing at 27 with 132 first series.

Saikhom Mirabai Chanu in action. Her first attempts in snatch will be 84 kg, and in clean and jerk will be 110 kg.

9:30 AM IST: An Algerian judo athlete will be sent home from the Tokyo Olympics after he withdrew from the competition to avoid potentially facing an Israeli opponent.

Satwiksairaj Rankireddy and Chirag Shetty vs Lee Yang and Wang Chi-Lin of Chinese Taipei coming up.

Indian pair Sharath Kamal and Manika Batra are 0-3 down against Lin Yun Ju and Cheng I Ching of Chinese Taipei.  This is a best of seven encounter.

Indian judoka Likmabam Shushila loses to Eva Csernoviczki in the Round of 32 elimination by Ippon.

Arjun Lal Jat and Arvind Singh finished fifth in Lightweight Men's Double Sculls Heat 2, and they are in the repechage. But their time of 6:40.33 is a worry. Ireland won the heat with a timing of 6:23.74.

India survive a flurry of New Zealand attack, thanks to the brilliance of goalkeeper Sreejesh, and win their opener 3-2.

A stunning field goal by Wilson Nick Stephen Jenness for New Zealand just before the end of third quarter.

India's Sumit Nagal takes on Denis Istomin of Uzbekistan in the second match at Court 10.

India increase the lead with another penalty corner conversion, by Harmanpreet Singh, again.

7:30 AM IST: 10m Air Rifle Women's final is on. And first medals in Tokyo Olympics to be awarded soon.

Action in Nippon Budokan starts in short while. Sushila Likmabam is making her Games debut. There will be successive rounds.

India finally take the much-deserved lead through a Harmanpreet Singh goal from a penalty corner.

6:50 AM IST: Historic moment. 12-year-old Hend Zaza of Syria starts her Olympic campaign in table tennis with a women's preliminary round clash against Austria's LIU Jia. She is the youngest table tennis player at Tokyo 2020.

Later, Indian starts Sharath Kamal and Manika Batra will be seen in action in their mixed double event.

Rupinder Pal Singh converts from the spot as India fight back.

Action started with Group B lifts at Tokyo International Forum. Siakhom Mirabai Devi, India's medal hope, is in Group A.

She is the lifter with the highest weight (210kg), which is also more than five kgs from her personal best, ahead of hot favourite Zhihui (205kg) of China.

Elsewhere, Jeanette Heg Duestad of Norway created the Olympics qualifying record with scores of 632.9. But sadly, both the Indian shooters Elavenil Valarivan (626.5) and Apurvi Chandela (621.9) failed to qualify for the next round, finishing poor 16th and 36th respectively.

The top eight finishers qualify for the final from the field of 50.

India start the second set. Pravin Jadhav and Deepika hit 10s. Taipei responds with 10 and 9. Poor one from India, 9s. Taipei hits the first 10 of the set, then Tang Chih-Chun hits 9. Set tied at 38 each. Taipei lead 3-1.

Both the teams are lined up for the first elimination round of the Games.

Both the Indian shooters, Apurvi Chandela and Elavenil Valarivan, so far failed to impress.

The Indian team of Deepika Kumari and Pravin Jadhav will face the Chinese Taipei pair of Lin Chia-En and Tang Chih-Chun in the 1/8 Eliminations Results.

After Series 3: Apurvi Chandela - 311.9. Seasoned Indian campaigner seems to be faltering. But too early to predict.

First with the qualification round. Each shooter will get 60 shots each to decide the rankings.. Strong starts from Indian shooters, Apurvi Chandela and Elavenil Valarivan

Tokyo is three-and-a-half-hours ahead of India and when Indian fans sip their first cup of tea, they will know if young Saurabh Chaudhary and Abhishek Verma have won medals in their pet event, the 10m air pistol. And by lunch time, India will know if lone weightlifter Mirabai Chanu has won a medal or Deepika and Pravin Yadav are in the medal rounds of mixed archery or Elavenil and Apurvi Chandela have lived up to their promise in 10m air rifle event.

Boxer Vikas Krishan, in his third Olympics, will be in action and so will be the promising badminton doubles team of Chirag Shetty and Satwiksairaj Rankireddy. The hockey teams will also start their campaign with the women, led by Rani, facing defending Olympic champions the Netherlands and the men, led by flagbearer Manpreet Singh, starting in the morning with a pool match against New Zealand.

These Games are expected to see a new India turning the corner in their Olympic journey. They have won 28 medals in all so far with hockey accounting for eight gold medals. Abhinav Bindra (Beijing 2008) is the only individual gold medallist in shooting. India won just two medals at Rio 2016 and in Tokyo, where India are fielding a record 120-plus athletes, the nation is hoping to surpass London 2012's record haul of six medals - two silvers and four bronze. (LIVE STREAMING | NEWS)

The Final Touch To Tableaux For Republic Day Parade