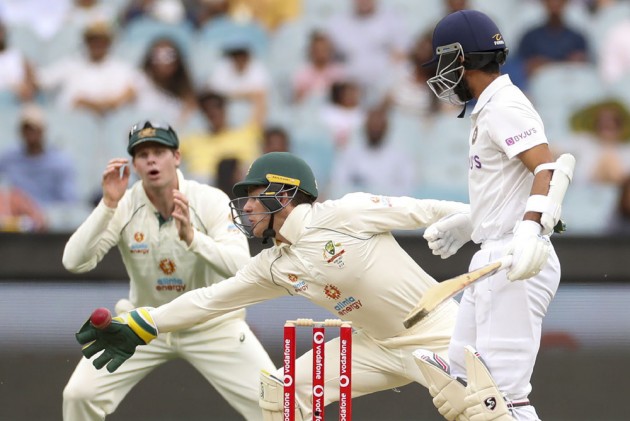 Stand-in skipper Ajinkya Rahane scored a fine century as India reached 277/5 before rain forced an early stumps on the second day of the second Test at Melbourne Cricket Ground on Sunday. Rahane showed great determination as he made an unbeaten 200-ball 104, studded with 12 hits to the fence. Rahane (104) and Ravindra Jadeja (40) were at the crease when the stumps were drawn with India leading by 82 runs. In the third session, Rahane and Jadeja added 104 runs without losing a wicket. The skipper, who was dropped multiple times, was also involved in two important stands -- 52 with Hanuma Vihari and 57 with Rishabh Pant. Australia were all out for 195 in their first innings on the opening day. Catch highlights of India vs Australia, second Test, Day 2 at Melbourne. (SCORECARD | DAY 2 REPORT | NEWS)

12:28 PM IST: Mitchell Starc returned for his 19th over. But brief delay as the wind brought plastic bags and papers onto the ground. A single to mid-off off the first ball, then a dot. It was followed by a well-directed bouncer and another dropped catch. Another life for Ajinkya Rahane, by Travis Head at backward point.

12:06 PM IST: Pat Cummins continued and a four off the fourth ball to deep backward point for Ajinkya Rahane's 12th Test century. He took 195 balls to reach the milestone.

11:30 AM IST: New ball taken. Mitchell Starc, as expected, with it. Ravindra Jadeja worked the first ball towards deep mid-wicket for three runs. A dot, then Ajinkya Rahane got another life. Steve Smith dropped at second slip, and a single. Rahane was on 73 off 168 balls. IND - 236/5 (81). Lead by 41 runs.

10:54 AM IST: Nathan Lyon returned for his 13th over. A double to start the over, then two dots. Ajinkya Rahane used his feet brilliantly and timed his cover drive to perfection for a four. Ball beat Pat Cummins to the rope. IND - 214/5 (72). Lead by 19 runs.

10:32 AM IST: Josh Hazlewood, still wicketless, on with his 16th over. A maiden to Ravindra Jadeja. India led by three runs.

10:27 AM IST: Mitchell Starc continued. A single to start, then a dot. Ajinkya Rahane found the gap in cordon for a four, and India overtook Australia. Three dots to end the over. IND - 198/5 (66).

10:14 AM IST: Ready to go again. Players are out. Mitchell Start will complete is over.

9:53 AM IST: A while ago at  Bay Oval in Mount Maunganui, New Zealand posted 431 in the first innings of the first Test against New Zealand. Skipper Kane Williamson scored 129, while BJ Watling (73) and Ross Taylor (70) hit seventies. For Pakistan, Shaheen Afridi took four while Yasir Shah got three wickets.

9:50 AM IST: Stand-in skipper Ajinkya Rahane completed a fine half-century as India reached 189/5. Rahane (53) and Ravindra Jadeja (4) were at the crease after rain forced an early Tea. In the second session, India lost the wickets of Hanuma Vihari (21) and Rishabh Pant (29).

9:43 AM IST: Mitchell Starc on with his 13th over. A dot to Ravindra Jadeja, then a bouncer to beat everyone, including a leaping Tim Paine, for four byes. Another bouncer and Jadeja fended off very well.

Then the covers. It's raining in Melbourne. Tea! India were trailing by six runs.

9:34 AM IST: Mitchell Starc continued and a four off the first ball as Ajinkya Ranahe reached his fifty in 112 balls.

9:33 AM IST: Pat Cummins returned for his 17th over. A maiden to Ravindra Jadeja. India added 41 runs in the last ten overs. They now trail Australia by 19 runs.

9:12 AM IST: Cameron Green returned for his sixth over. Two dots, then Ajinkya Rahana gently pushed the overpitched third ball for a four to mid-off boundary. A single off the fifth ball and fifty-run stand with Rishabh Pant in 74 balls. Five from the over. IND - 166/4 (57).

8:51 AM IST: And some runs for India. Rishabh Pant hit the first two balls of Pat Cummins' 14th over, then a pull shot for four. Change of corridor for Cummins, and a dot. He continued from round the wicket, but a four to backward point. Cummins' not happy. Exchanged words. 12 from the over. IND - 147/4 (52).

8:40 AM IST: Pat Cummins returned for his 13th over. Ajinkya Rahane took doubles off the second and fifth balls, then deliberately played a cut shot through the cordon for his third four. IND - 134/4 (50)

8:36 AM IST: Aussies attacking Rishabh Pant with close in fielders, but he's rotating the strike with ease. A double off the third ball and two singles. IND - 126/4 (49).

8:31 AM IST: Josh Hazlewood on with his 14th over. And a maiden to Ajinkya Rahane. 32 runs and a wicket in the last ten overs.

8:27 AM IST: Another over from Nathan Lyon, and some runs for India. Ajinkya Rahane took a single off the second ball, then Rishabh Pant played the third to past slip cordon for a couple. And singles off the last two. IND - 122/4 (47).

And with that, the 52-run stand also came to an end. Rishabh Pant joined skipper Ajinkya Rahane in the centre.

7:58 AM IST: Nathan Lyon continued. Some runs for India, courtesy four byes off the third ball. Turned square and beat everyone down leg. Six runs from the over, and hundred up for India. IND - 100/3 (41).

7:42 AM IST: Players are back for the post-Lunch play. Josh Hazlewood to resume the proceedings. Hanuma Vihari takes the strike. Still overcast conditions in Melbourne.

7:05 AM IST: India failed to wrest the momentum after a seemingly good Shubman Gill-Cheteshwar Pujara stand. Both the overnight batsmen fell in quick succession to Pat Cummins, then skipper Ajinkya Rahane and Hanuma found themselves rebuilding the innings. At Lunch on Day 2, India were still 105 runs behind Australia's first innings score of 195.

Rahane and Vihari were batting on 10 and 13 respectively.

At Bay Oval in Mount Maunganui, Kane Williamson reached his 23rd Test century and shared a 133-run partnership with Henry Nicholls which helped New Zealand to 301/5 at Lunch on the second day of their first Test against Pakistan. Both batsmen were out in the first session, Nicholls for 56 and Williamson for 129 as Pakistan kept a foothold in the match. At Lunch B.J. Watling was 13 not out and Mitchell Santner was 11.

6:56 AM IST: Spin on. Nathan Lyon on. The offie got just one over yesterday. And a maiden to Hanuma Vihari.

6:53 AM IST: Mitchell Starc on with his eighth over. Two dots and an edge through the cordon as Ajinkya Rahane got his first boundary. The skipper than played a very loose shot, trying to drive the fifth ball in a hurry. Lucky he didn't nick it. IND - 87/3 (34).

6:44 AM IST: Mitchell Starc on with hos seventh over. One leg bye off the fifth ball and a single off the last ball. Ajinkya Rahane and Hanuma Vihari have added 18 in 52 balls for the fourth wicket. IND - 82/3 (32).

6:40 AM IST: Josh Hazlewood returned for seventh over. A maiden, to a watchful Ajinkya Rahane. India skipper on 2 off 24.

6:30 AM IST: Cameron Green on with his fifth over. Ajinkya Rahane finally opened his account with a single off the second ball (in 14 balls), then Hanuma Vihari clipped the next ball for a four to deep mid-wicket. Vihari picked a couple more off the last ball, to deep mid-wicket. IND - 77/3 (29).

6:26 AM IST: First over today for Mitchell Starc. He replaced Pat Cummins. Five dots to Hanuma Vihari. No, make it a maiden.

6:22 AM IST: Cameron Green continued. Hanuma Vihari got a three off the second ball, behind square. A dot then a huge shout for LBW against Ajinkya Rahane. Height issue. IND - 70/3 (27).

6:14 AM IST: Cameron Green on with his third over. And his first maiden, to Hanuma Vihari.  India have added just 17 runs for two wickets.

6:09 AM IST: Hanuma Vihari joined skipper Ajinkya Rahane in the centre, and right away scored his first runs - a three off the second ball he faced. IND - 67/3 (24).

That brought skipper Ajinkya Rahane in the centre.

5:50 AM IST: Bowling change. Cameron Green on with his right-arm medium pace. He almost had Cheteshwar Pujara, but the ball landed just in front of Matthew Wade at first sleep. That happened off the last ball. Before that Pujara played a flick that went past a diving Joe Burns at square leg. IND - 59/1 (21).

5:40 AM IST: Josh Hazlewood continued. And his first maiden over, to Shubman Gill.

5:36 AM IST: A maiden over from Pat Cummins to Shubman Gill. The Indian opener is approaching his fifty on debut (40 off 56). He has added 53 in 103 for the second wicket with Cheteshwar Pujara.

5:32 AM IST: A single from Josh Hazlewood's fifth over as Shubman Gill played the second ball to mid-wicket. India have scored 30 runs in the last ten overs, across two days. AUS - 53/1 (17).

5:24 AM IST: Josh Hazlewood on with his fourth over. And another inside edge and gone for four, beating Tim Paine. Shubman Gill living a charmed life. It was followed by a three through the covers. A dot, then Chetshwar Paujara hit another three, to square leg. 10 from the over. IND - 50/1 (15).

5:19 AM IST: Pat Cummins continued and another probing over. Cheteshwar Pujara edged one off the second ball but didn't carry to the cordon. A maiden.

5:14 AM IST: Josh Hazlewood with his fifth over. Shubman Gill dropped by Tim Paine off the third ball. Massive inside edge and the Aussie skipper missed it. Then, rubbing salt into the wound, Gill hit the next one for a four. IND - 40/1 (13).

4:49 AM IST: Players are out for Day 2's play. Pat Cummins with the new ball and Cheteswhar Pujara to face the first ball.

4:45 AM IST: “We’re not looking too far ahead,” Jasprit Bumrah told at MCG on Saturday. “We don’t want to be conservative in our mindset...Not being reckless but being confident ... that is the motive going forward now,” Bumrah added.

India will have to take it session by session on Sunday. Mitchell Starc has already shown how dangerous he can be but debutant Shubman Gill and the experienced Cheteshwar Pujara were up against the challenge and hinted that India will not repeat the errors they made in Adelaide.

Marnus Labuschagne was left to lament "three innocuous dismissals" as India took control of the second Test against Australia.

Labuschagne's 86-run stand with Travis Head was the best resistance Australia offered as Jasprit Bumrah (4-56), Ravichandran Ashwin (3-35) and Mohammed Siraj (2-40) laid waste to the top of the order.

Joe Burns and Steve Smith went for ducks and Matthew Wade's promising start of 30 off 39 deliveries was undone after a reckless shot off Ashwin.

It marked the first time since November 1984 that Australia failed to reach 200 in consecutive first innings, after they mustered just 191 in the first Test in Adelaide before India's spectacular collapse.