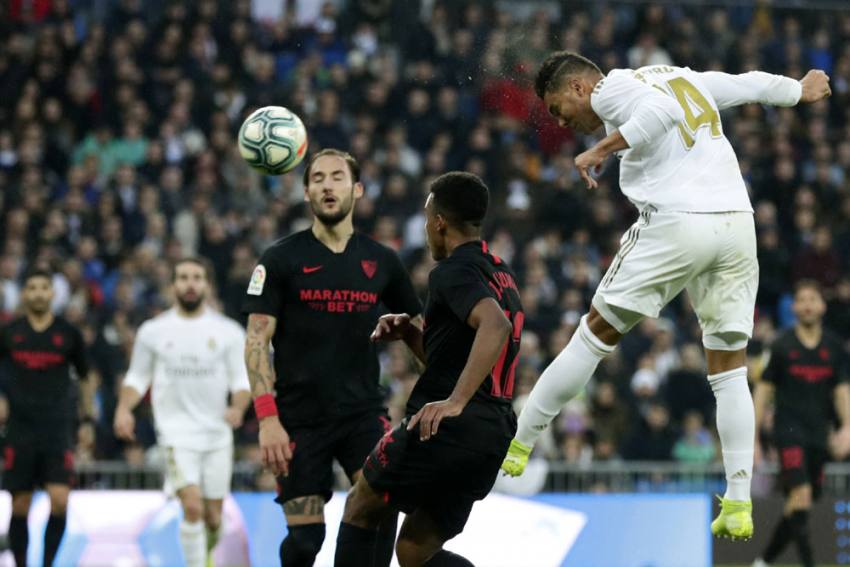 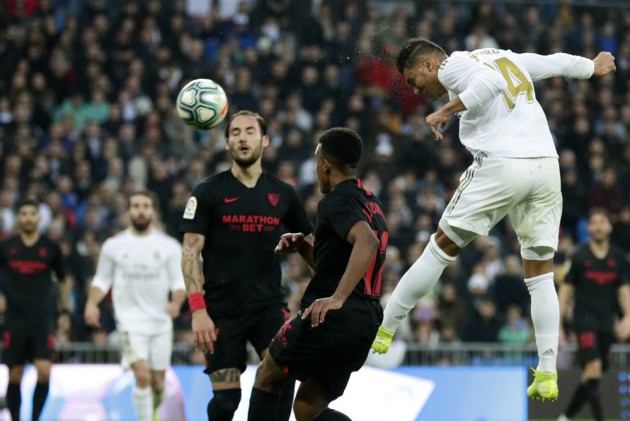 Fresh from their penalty shootout victory over Atletico Madrid in the Supercopa de Espana, injury-hit Madrid were largely underwhelming until a moment of quality from Casemiro broke the deadlock shortly before the hour on Saturday.

Indeed, Sevilla thought they had taken the lead through Luuk de Jong's header midway through the first half, but Julen Lopetegui's luck was out against his former club as VAR came to Los Blancos' rescue.

De Jong did have his goal when he curled in a superb strike from the edge of the area after 64 minutes, only for Casemiro to double his tally five minutes later as Madrid claimed the points.

After a promising run from Rodrygo Goes came to nothing, Toni Kroos had the first sighter of the match, curling a first-time effort tamely into the arms of Tomas Vaclik.

Madrid swiftly took control, but lacked cutting edge up top and relied on VAR to keep them on level terms with 30 minutes played when De Jong's header was disallowed for Nemanja Gudelj blocking off Eder Militao, much to Lopetegui's chagrin.

But Casemiro took matters into his own hands in the 57th minute, lifting a deft finish over Vaclik after racing onto Luka Jovic's clever flick.

Karim Benzema and Vinicius Jr were introduced as Zinedine Zidane looked to press home their advantage, yet it was Sevilla who struck next - De Jong's excellent finish into the left-hand corner allowed to stand despite an apparent handball from Munir El Haddadi.

Parity was short lived, however, and Casemiro made no mistake when he was left unmarked in the area to head home from Lucas Vazquez's cross, with a fine save from Vaclik preventing Kroos from adding a third late on.

What does it mean? Madrid top of the pile... for now

It has been all change at Barca and now Madrid have put the pressure firmly on Quique Setien in his first match in charge at Camp Nou on Sunday.

Madrid are three points clear in first place, though Barca would move back above them should they get the Setien era off to a winning start against Granada. Sevilla, meanwhile, sit in fourth.

Casemiro comes up with the goods

It is not - or at least, it should not be - Casemiro's job to provide the goals in Madrid's side, but with Los Blancos' forwards failing to trouble Sevilla's defence too often, the midfielder stepped up. His first finish was coolly taken, while his second was a simple header for a player of the Brazil international's quality as he scored his first brace.

Militao gets lucky thanks to VAR

Madrid's marking for what Sevilla thought was the opener was horrendous, with De Jong given the freedom of the penalty area to head home. Militao went down far too easily after colliding with Gudelj, but the referee - after checking the pitchside monitor - deemed the contact enough to warrant a foul. Madrid, however, were not as lucky when De Jong slammed in the equaliser.

Both sides are in Copa del Rey action in midweek, with Madrid facing Segunda B side Unionistas de Salamanca a day after Sevilla take on Levante in a Tuesday contest.