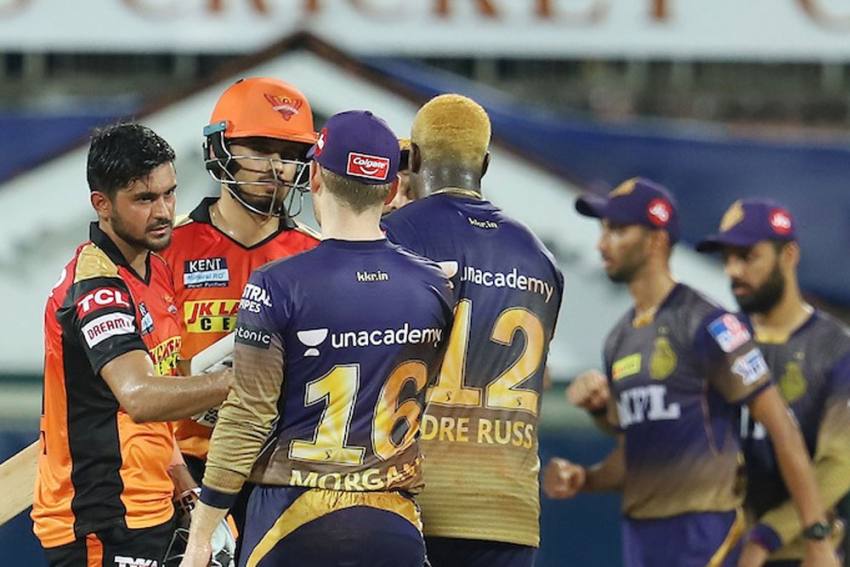 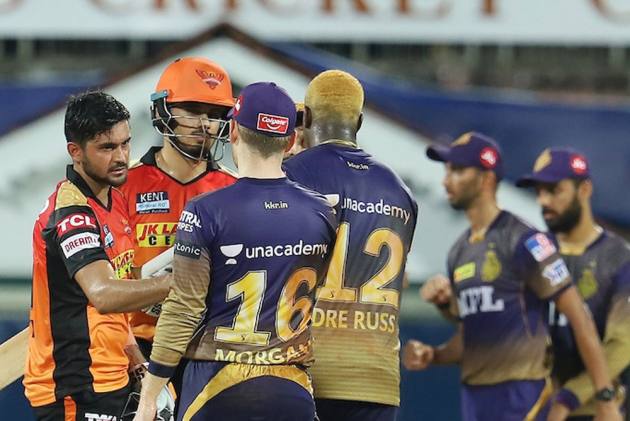 SRH's Rashid Khan (2/24) was yet again at his best, asking tough questions to the KKR batsmen but most of his bowling colleagues proved ineffective on a slow yet decent batting wicket.

Hyderabad lost skipper David Warner (3) and Wriddhiman Saha (7) early and were always playing a catch-up game despite Jonny Bairstow's fighting half-century. They could manage 177 for five in the end.

Warner was dropped on nought by Pat Cummins in the first over bowled by Harbhajan Singh but he could not make good use of the life and became a victim of pacer Prasidh Krishna while Saha was cleaned up by Shakib Al Hasan.

Jonny Bairstow (55) and Manish Pandey (61 not out) formed a partnership at a steady run rate. Australian pacer Cummins broke their 92-run stand when he had Bairstow caught at backward point by Rana.

Mohammed Nabi (14) was hit on his neck by Krishna but the Afghan responded with a cracking six. He went after a slower one but only to be caught by Eoin Morgan.

The 19-year-old Abdul Samad, who hails from Jammu and Kashmir, creamed off two sixes and a four off Cummins in the penultimate over to keep SRH in hunt. Requiring 22 runs from the last over, KKR's Andre Russell held his nerves to deny SRH a win.

Earlier, left-handed opener Rana struck the ball hard and clean to provide his side a confident start after they were asked to take first strike.

His strokes on the off-side -- the drives and cuts - were of highest quality and a treat to the eye.

Neither Bhuvneshwar Kumar nor T Natarajan could stop Rana from hitting boundaries even as Subhman Gill was quiet initially. Sandeep Sharma was hit for three boundaries in a row by him.

Gill opened up his arms to hit a massive straight six off Natarajan to make it even better for KKR.

However, the run-flow was affected when ever-reliable Rashid got the ball in his hands. He also provided the breakthrough when he deceived Gill with a wrong'un to find the stumps.

Rana though kept going strong, completing his half-century with a six off Vijay Shankar after surviving an LBW appeal off Rashid. He got the decision overturned, taking the DRS call.

Rana's six-hitting continued after getting his fifty as he punished Natarajan and Sandeep again.

His colleague at the other end Rahul Tripathi also stroked confidently and fluently. He smashed a massive six off Bhuvneshwar and then followed it up with a cheeky four in the third-man region.

He completed his fifty with another boundary off Bhuvneshwar but was dismissed by Natarajan soon after when he top-edged a ball.

Rashid too sent back dangerous Andre Russell (5) back.