Indian pacer Mohammed Shami has bowled less than 17 overs in two ICC Cricket World Cup 2019 matches, but taken eight wickets -- four each against Afghanistan and the West Indies -- which included a dream delivery which is already hailed as the possible contender for the ball of the tournament 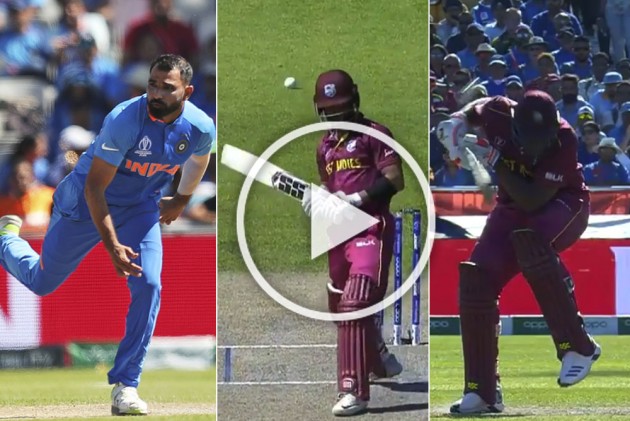 Fans wonder why pacer Mohammed Shami was not given the man of the match award after helping India beat the West Indies with his brilliant spell in their ICC Cricket World Cup 2019 group match at Old Trafford, Manchester on Thursday.

He returned with figures of 4/16 from his spell of 6.2 overs as India thrashed the Windies by 125 runs after setting a target of 269 runs. This was his back-to-back four-wicket hauls. In the previous match too, he was overlooked, despite becoming the first bowler to take a hattrick in the tournament. He has eight wickets from less than 17 overs.

But the 28-year-old made his outings memorable for the fans by producing lip smacking deliveries – unplayable yorkers, magical nip-backers, nasty bouncers, et al.

The best of the lot, however, was a dream delivery which claimed the wicket of Shai Hope at Old Trafford. It has been hailed as probably the best delivery of the tournament, even eclipsing the one produced by Australia’s Mitchell Starc against England all-rounder Ben Stokes.

Shami then followed it up a nasty bouncer to bounce out Oshane Thomas. Pretty ironic considering how Indian batsmen of the yore often ended up at the receiving end of the lethal Windies fast bowlers.

A rare sight indeed! And now, the tables have been turned and one of the bowlers setting the ‘pace’ is Shami.

Watch both the deliveries here:

A rising @MdShami11 delivery clipped Oshane Thomas on the hand and ended up in the hands of Rohit Sharma as #TeamIndia remain unbeaten at #CWC19 pic.twitter.com/pzKs4smWSy

Coming back the man of the match, Shami was the main architects for India’s wins against both Afghanistan and the Windies. Against the Afghans, he finished off a tense match by taking the last three wickets after removing opener Hazratullah Zazai to give India an 11-run win. But the award went to Jasprit Bumrah, who got two wickets. Against the Windies, skipper Virat Kohli won the award for his 82-ball 72. India won the match by 125 runs.

And even after producing two ‘match-winning’ performances, Shami is likely to warm the bench as unbeaten India continue their World Cup campaign. He was drafted into the XI as a replacement for the injured Bhuvneshwar Kumar. Once Bhuvi regains match-fitness, Shami's position will once again be discussed.