Last week, Chris Gayle had indicated that he could retire from international after the series against India next month. And on Thursday, the West Indies legend played his part in beating Afghanistan in his final Cricket World Cup match 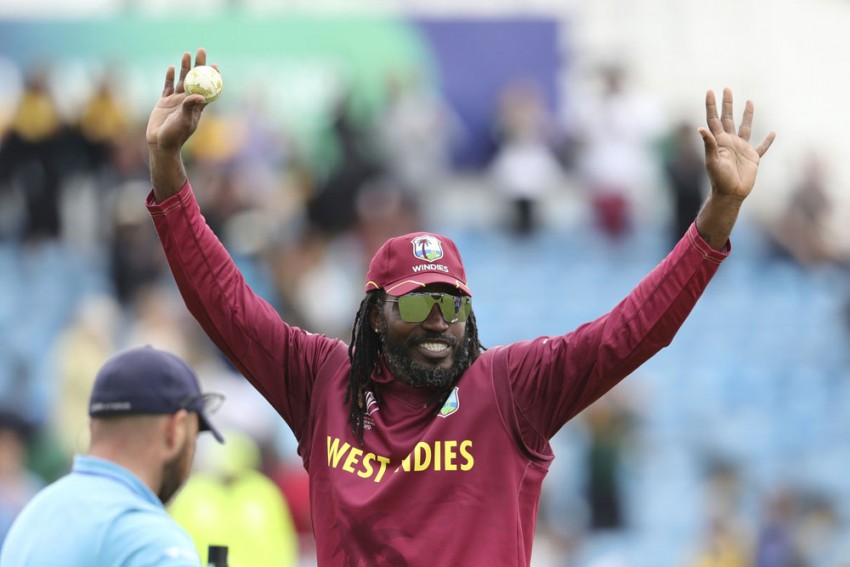 West Indies' Chris Gayle holds the ball as he leaves the ground after their win over Afghanistan in an ICC Cricket World Cup 2019 match at Headingley in Leeds, England on July 4, 2019.
AP Photo
PTI 2019-07-05T00:03:58+05:30 ICC CWC 2019: Ever Jovial Chris Gayle Shares His Regret, Makes Moving Statement After His Final World Cup Game

Having "definitely" played in his last World Cup, big-hitting opener Chris Gayle Thursday regretted not being able to make the semifinals, but said he will be around to help West Indies cricket.

"It's been a privilege and honour to represent West Indies in five World Cups, disappointed to end without making it to the final four. Lot has happened behind the scenes to get here and be here, that's fantastic," Gayle said after their last match against Afghanistan ended in a 23-run win.

The victory will hardly be any consolation for West Indies, who started the tournament on a high, but are going back with only two wins from nine games.

"Would've loved to lift the trophy, but it didn't happen but at the same time it was fun, enjoyed it. All the guys rallied around me, got the support of the youngsters. Must commend the staff for the work ethics they've put in. Words can't explain my feeling at the moment honestly," the 39-year-old veteran said.

Last week, Gayle had indicated that he could retire from international after the series against India next month.

"We have a great bunch, it's for them to uplift West Indies cricket. I'll be around, I may be around for a few more games, will be there for the youngsters. World Cup wasn't to be but life does go on.

"It is my last World Cup....unless they give me two years of rest and I come back (laughs). I don't intend to put my body on the risk, I've been struggling. This is the last one, definitely."

Gayle needed 18 to leapfrog Brian Lara and become the Windies' leading one-day international run-scorer of all-time, only to be dismissed for 7.

He added, "The future looks bright, with Hetmyer, Hope, Pooran - those guys will carry the flag and make sure West Indies cricket is back to where it belongs. They have a young captain in Jason Holder as well, they have to rally around. Look forward to the next World Cup as well."

Asked about his plans ahead, he said, "To play the T20Is and ODIs against India, the CPL and the Canadian T20. That's that. We'll see after that what happens."