In one of the marquee clashes of the ongoing Cricket World Cup, Australia edged past New Zealand in an epic contest, with both Trent Boult and Mitchell Starc leading their respective pace lineups. 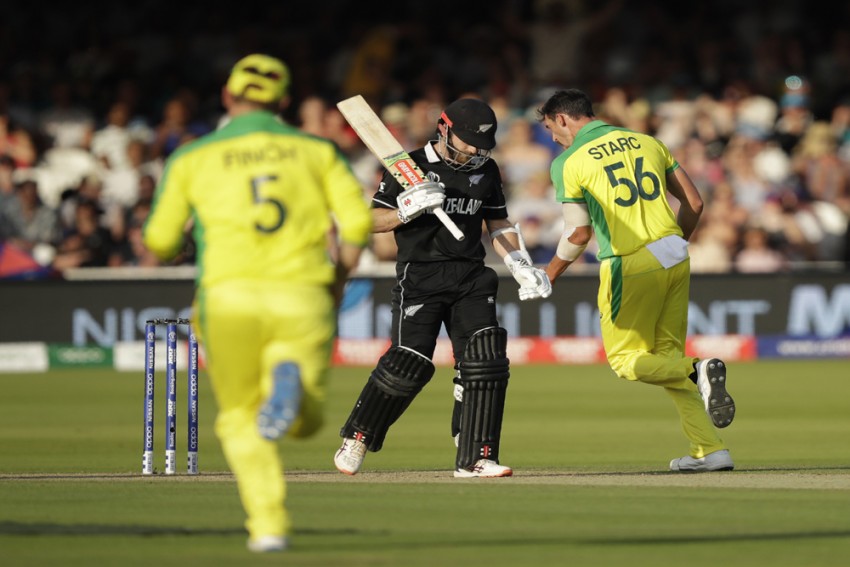 Pace spearhead Mitchell Starc destroyed New Zealand with five wickets in 9.4 overs. Australia had set a target of 244, led by the likes of Usman Khawaja and Alex Carey. Meanwhile, the Black Caps failed, getting all out at 157, in 43.4 overs. The Aussies won the match by 86 runs in the ongoing  Cricket World Cup, on June 29, Lord's. Meanwhile, Trent Boult hogged the limelight earlier on with a sensational last-over hat-trick to stop Australia's rebuilding job.

With his swinging full-pitched deliveries, Boult sent back the well-settled Usman Khawaja (88 off 129 balls), Starc and Jason Behrendorff, while giving away just two runs at the Lord's.

Bolt (4/51 in 10 overs) struck after Khawaja and Alex Carey (71 off 72 balls) scored contrasting half-centuries to lift Australia from a disastrous start after they opted to bat.

With his feat, Bolt became the first New Zealander to grab a hat-trick in the World Cup.

The defending champions lost half their side with less than 100 runs on the board, but a 107-run partnership for the sixth wicket between Khawaja and Carey helped them rebuild.

It was a rare occasion when the opening duo of David Warner and Aaron Finch, in red-hot from entering this game, failed to fire.

While Finch (8) was the first to go, tapped in front by the experienced Trent Boult, Warner departed after making 16 to leave Australia in a spot of bother at 38 for two in the 10th over, and it became worse when Steve Smith was sent back by Lockie Ferguson with the scorecard reading a precarious 46 for three in the 12th over.

Marcus Stoinis (21) and Khawaja attempted a recovery act before Jimmy Neesham derailed it.

Glenn Maxwell flopped again, this time failing to even open his account as Australia stared down the barrel.

Australia were in dire need of a partnership and the duo of Carey and Khawaja provided just that with a century partnership, helping the defending champions to a respectable position.

Carey smashed 11 boundaries during his fluent knock, while Khawaja found the fence five times during his sedate innings.

Starc took the wickets of Kane Williamson, Tom Latham, Mitchell Santer, Ish Sodi and Lockey Ferguson. Scalping Williamson, who was at a 40-run knock turned out to be a turning point in the clash, with New Zealand heavily dependent on their captain's batting approach.

The Black Caps' poor batting approach could only see the likes of Williamson and Ross Taylor cross 25-runs. The latter scored 30-runs in 50-balls.

Martin Guptill could only notch 20-runs in 43-balls, and was bowled out by Jason Behrendorff (2/31). Behnrendorff also dismissed Henry Nicholls.

Meanwhile, Colin de Grandhomme was dismissed by Steve Smith in the first ball itself.

The likes of Jimmy Neesham, Santner could hardly muster a challenge to the Aussies. The winners are now top of the table, having only lost one fixture in the tournament, which was against India.